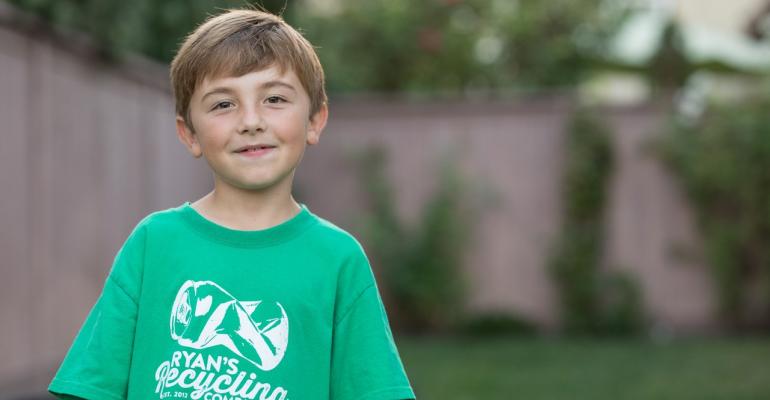 The young recycler is on a mission to clean up his neighborhood and the world.

An autograph from recycling entrepreneur Ryan Hickman just got even cooler. Not only has the young recycler raised thousands of dollars for charity and recycled almost 300,000 cans and bottles, but he’s also recently mastered cursive.

Eight-year-old Ryan of California has been recycling cans and bottles with his dad for almost five years. This year, he’s issued a challenge to anyone who will join him to recycle 300,000 cans and bottles before May 1. The initiative is the product of years of work, but it started on a much smaller scale.

“Initially, it was just he and I going to our local recycling facility with just two small kitchen bags of plastic water bottles that we had used at the house,” says Ryan’s dad, Damion Hickman. The experience, unassuming as it was, was enough to get Ryan hooked, and the business was born.

When Hickman arrived home from work the next day, he quickly learned that he’d been hired on the ground floor.

“Ryan was telling me that he and my wife went and gave everybody on our street garbage bags and said, ‘We’ll be back on Friday to pick up your cans and bottles,”’ he said.

Since then, Ryan’s Recycling Company has recycled hundreds of thousands of cans and bottles. Ryan and his dad collect recyclables from neighbors, local businesses and the beaches near their house. For the challenge, Ryan is donating the proceeds to the Pacific Marine Mammal Center, which will use the funds to purchase medicine, blankets and other supplies.

For Ryan, the desire to keep recycling comes from an understanding that more bottles and cans recycled means fewer bottles and cans in the ocean, according to Hickman. “He’s very understanding and very conscious,” he said. Ryan has accomplished an awful lot in just five years, and his efforts have made him something of a celebrity along the way.

Ryan and his dad have received messages from Dubai to Dublin sharing how Ryan’s recycling has inspired all kinds of people. “We’ve heard from a lot of different schools around the world that now recycle because of Ryan,” says Hickman.

Kids across the country and around the world have been inspired by Ryan’s work, and groups from the Marine Center all the way to the country of Ukraine are looking to Ryan to help better understand the effect recycling can have.

Ryan and his family have made guest appearances across the country, meeting new people and discussing the importance of recycling at many different events. Last year, he was named one of CNN’s Young Wonders on 2017. Even public figures like Chelsea Clinton and Morgan Freeman have sent their best to Ryan, congratulating him on what he’s accomplished.

When asked how they juggle everything, Hickman says that it can be tight, but it’s always worth it, even if that means doing homework on the plane. “It’s cool to see anybody making a difference at that level, and he loves it. He’s having a blast,” says Hickman.

For Ryan and his family, it can still be hard to believe that everything has come from a couple kitchen bags of plastic water bottles. “We thought it might last one or two trips and here we are five years later,” says Hickman.

During Ryan’s Recycling Challenge, Ryan wants to hear from people all over the world about how many bottles and cans they’re recycling each week. Donations, while optional, are also accepted, with all proceeds going toward the Marine Center. The challenge will conclude on May 1, and the goal is 300,000 total cans and bottles recycled.

Learn more about the challenge by watching the below video: