The National Association for PET Container Resources (NAPCOR) and the Association of Plastic Recyclers (APR) have released “Report on Postconsumer PET Container Recycling Activity in 2017,” which reveals that the U.S. polyethylene terephthalate (PET) recycling rate increased from 28.4 percent in 2016 to 29.2 percent in 2017. This increase reflects decreases in both total collection volumes and the volume of PET bottles available for recycling in the U.S.

“Demand for RPET (recycled polyethylene terephthalate) continues to be healthy, and we have capacity and infrastructure to meet those needs,” said Tom Busard, chairman of NAPCOR, chief procurement officer for Plastipak Packaging, Inc. and president of Clean Tech, Plastipak’s recycling affiliate, in a statement. “However, we have more work to do to improve the quality and volume of PET that goes to our reclaimers.”

The volume of PET bottles available for recycling in the U.S. declined in 2017 for the first time since 2009. This was somewhat due to the bankruptcy of M&G Polymers, a major PET resin producer, and bottled water sales volumes being greater than that of carbonated soft drinks.

The total weight of PET bottles available for recycling was 5,913 million pounds, a decrease of more than 4 percent from 2016. This number reflects the total amount of PET resin used by U.S. bottle manufacturers from U.S., foreign and recycled sources, with adjustments for scrap generated and not reused in bottles and bottles less than 8 ounces in size. The 5,913 million pounds served as the denominator in the report to determine both the recycling and material utilization rates and includes 357 million pounds of postconsumer PET recyclate.

Export volumes continued to see a decline, with 2017 being the lowest export fraction recorded since 2004 at only 16 percent of total collection. The domestic market readily absorbed the bottles not exported; total postconsumer bottles recycled and used by reclaimers was supported by strong domestic demand for the material. 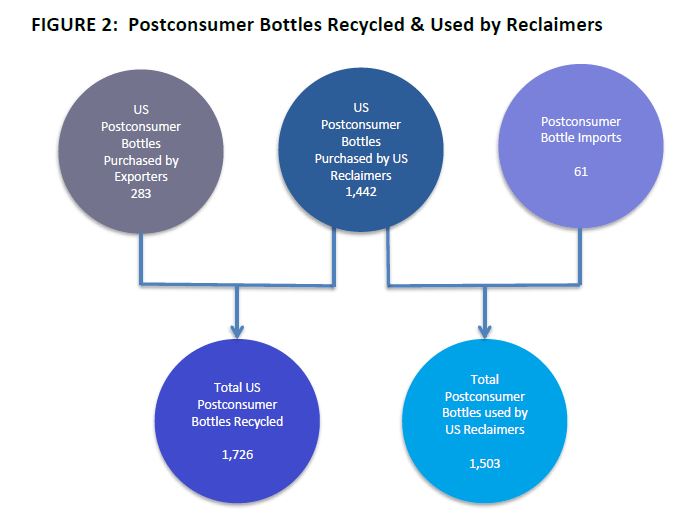 The amount of PET material processed through materials recovery facilities (MRFs) declined again in 2017, and it’s unclear whether the slow but steady decline is occurring at the point of collection or at the point of MRF sortation and processing, or some combination of the two. Lightweighting of containers, low PET bale prices, low value for the remainder of the commercial stream (particularly paper) and China’s waste import restrictions are, however, factors that are disrupting and changing the markets.

“The key to continued growth in the PET recycling industry is increased demand for RPET by end users and designing bottles for recyclability. Increased utilization of RPET provides the connection to meeting ‘circular economy’ sustainability goals announced by many consumer brands,” said Steve Alexander, president of APR, in a statement. “Despite challenges with increased contamination and demand markets, the RPET industry continues to demonstrate its strength in terms of consistent domestic material purchases and investment in enhanced processing capacity. The industry is superbly situated to work with all segments of the demand market to meet their sustainability challenges.”

In terms of RPET used in U.S. and Canadian end market applications, total volumes increased by more than 5 percent to 1,574 million pounds in 2017. Fiber, sheet and thermoforms, along with the strapping market, showed growth over 2016, while RPET use in bottles saw a reduction in total pounds. 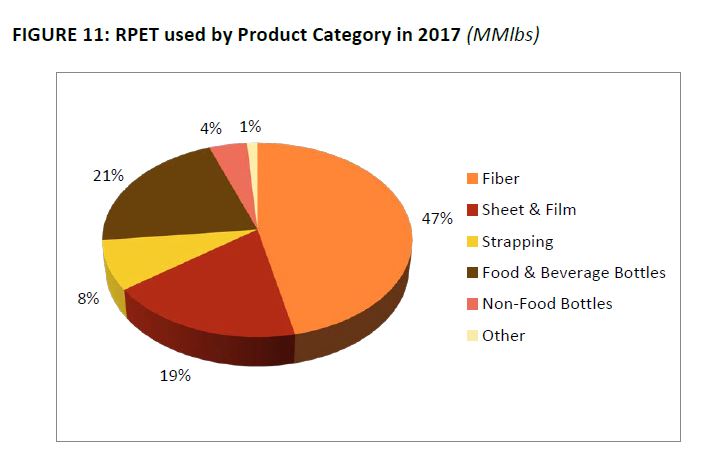 Looking ahead to the future of PET recycling markets, the report states that “while the markets for RPET and virgin PET are distinct, it is clear that pricing of RPET is influenced by virgin PET … The overall direction for RPET pricing will be to trend directionally with virgin, but certain other factors will have an impact as well.”

Both NAPCOR and APR are continuing to work to address the industry’s ongoing challenges, with a particular focus on improving the quality of PET from the waste stream, reducing non-PET contamination in recycling streams and building awareness at both industry and consumer levels of the importance of recycling PET.