Recyclebank Partners with Disney for an Interactive Recycling Campaign

N.Y.-based Recyclebank, a Marketing-as-a-Service (Maas) company that works toward a waste-free future by collaborating with cities and brands to encourage its members to make more sustainable purchasing and disposal habits, has partnered with Disney to launch a three-month, family-friendly campaign entitled “The Magic of Conservation.”

The Magic of Conservation includes a variety of digital games, articles, quizzes and educational slideshows designed to educate families and children on the correct ways to recycle. For example, a slideshow featuring Mickey and friends allows readers to go beyond the bin and learn about where materials came from and how recycling helps the world. 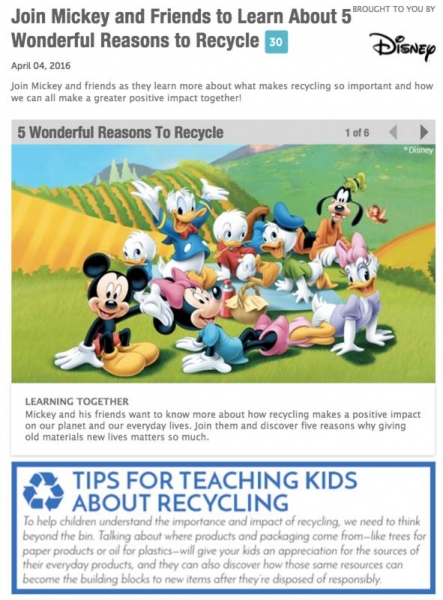 Image courtesy of Recyclebank and Disney.

“We strongly believe that behavior change starts with education,” says Recyclebank CEO Javier Flaim. “Our overall goal is to make meaningful change with respect to decreasing waste, improving recycling habits and raising resident awareness and participation with waste and recycling in communities throughout the U.S.”

The content shared on the campaign website is available to both Recyclebank members and audience members. Members of Recyclebank can earn points for engaging in the recycling education tools. Once they have accumulated points, the members can use their points for a number of rewards like goods, services, experiences, donation opportunities and social recognition. For this particular campaign, members can also redeem their points for Disney rewards, such as $5 off a $50 purchase at Disneystore.com or a WALL-E e-book from Disney Story Central.

“From great deals at local and national businesses to reinvesting real dollars within the community at local schools, we motivate residents to divert waste from landfills in a number of different ways,” says Flaim. “We also use data and engagement metrics to offer residents the right incentives at the right time.”

The campaign website currently has a handful of interactive recycling tools for members and readers to choose from. Recyclebank and Disney will be rolling out new content modules in both May and June before the campaign concludes at the end of June. 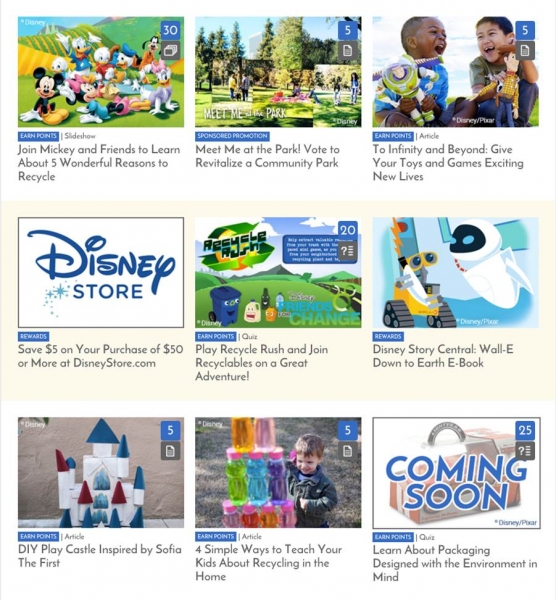 Image courtesy of Recyclebank and Disney.

In honor of Earth Day, Recyclebank and Disney will be hosting a Earth Day Twitter Chat where members of Twitter can connect with Recyclebank via Twitter @Recyclebank and mention #MagicOfConservation for a chance to win Disney prizes.

In addition to this campaign, Recyclebank is working to create public and private partnerships with municipalities, residents, companies and brands that are looking to make a difference with respect to waste and recycling. And by working with different municipalities and waste haulers, some members can earn points for their recycling efforts at home.

“Since 2004, we have boosted recycling rates in more than 300 communities throughout the U.S. and helped divert 1.5 billion pounds of waste from landfills in 2015 alone,” says Flaim.