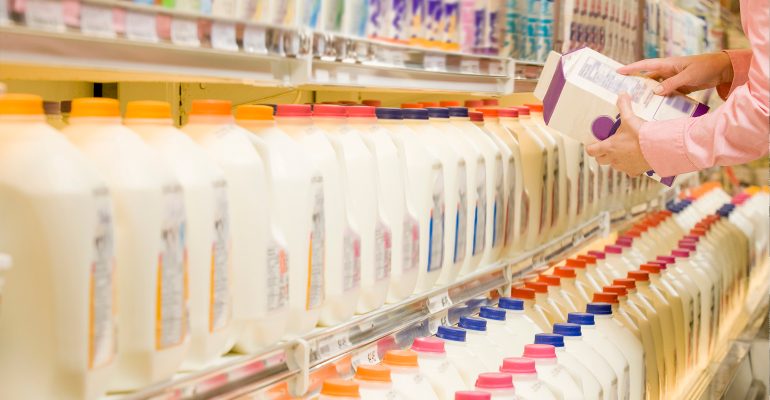 In an effort to increase awareness of milk jug recycling, the California Milk Advisory Board (CMAB) recently launched a public information campaign. The "Recycle the Jug" campaign is designed to drive sustainable behavior change across the state by addressing misconceptions to ensure plastic milk jugs made of high-density polyethylene (HDPE) or #2 plastic make it into the recycling stream.

“California dairy processors want to increase recycled content in plastic milk jugs but access to recycled high density polyethylene (HDPE), the material they are made from, is limited,” says Bob Carroll, vice president of business development for the CMAB based in Tracy, Calif. “By increasing consumer awareness of the recyclability of milk jugs, we hope to boost participation in recycling, and in turn, expand access to recycled HDPE so that we can close the loop on plastic milk packaging.”

“In reality, this packaging is recognizable and easy to sort, which makes it easier for recycling centers to ensure it is recycled properly. Not only that, but given the high demand for recycled content, HDPE is a valuable resource for recycling companies,” says Carroll.

As part of the campaign, the CMAB is rolling out a new recycling icon in collaboration with California dairy producers as a reminder to consumers to recycle the jug with their local recycling curbside program. The new icon will soon appear on milk jugs at retail stores across the state.

"California consumers are dedicated to doing their part to recycle but many don't understand that the HDPE used for plastic milk jugs is one of the most widely accepted plastics in recycling programs across the United States. It's highly desirable by recyclers because of its value and ability to be turned into new materials," John Talbot, CEO of the CMAB said in a statement. "We want to encourage consumers who buy milk in the jug to make sure that jug makes it to the recycling bin to help keep plastic out of landfills."

Working closely with the dairy, retail and recycling industries, the Recycle the Jug campaign encourages consumers to take three steps to recycle their plastic milk jugs – Pour it. Cap it. Bin it. A new Recylethejug.com site launched in collaboration with the Milk Processor Education Program (MilkPEP) provides complete information on milk jug and other recycling.

"Dairy processors are constantly exploring ways to provide milk in the most convenient, sustainable packaging – using more recycled HDPE is one example. More recycled content means lower costs for packaging manufacturers and that's what this campaign encourages," Yin Woon Rani, CEO of MilkPEP said in a statement. "The more consumers put their milk jugs into the recycling bin, the more responsibly made packaging we can make, and that's something consumers can feel good about."

To start the recycling process, the jugs will arrive at material recovery facilities (MRFs) mixed in with other recycling. They are pulled by hand or sometimes also using artificial intelligence (AI) robots off a sorting line and then crushed into a bale, sold to converters who further sort, clean, melt, and convert into pellets. These pellets are then shipped to packaging companies to be used again as bottles for the juice, milk, and water industries, or to companies for a variety of other uses such as turning them into boards that can be used for outdoor furniture and landscaping.

"HDPE is a valuable resource for recyclers because it can go into a variety of materials, from plastic lumber to packaging for products like milk. Because natural HDPE doesn't have color added, recyclers can add any type of ink or color when reused," Tim Dewey-Mattia, Recycling & Public Education Manager for Napa Recycling said in a statement. "Milk jugs are easy to recognize and sort at recycling centers, so consumers can have confidence that their milk jug will actually be recycled. And that reduces the use of virgin materials, saves energy and saves money for both consumers and recycling companies."

The plastic used in milk jugs can be collected, processed, and manufactured into new products and packaging after their initial use, including more milk jugs.