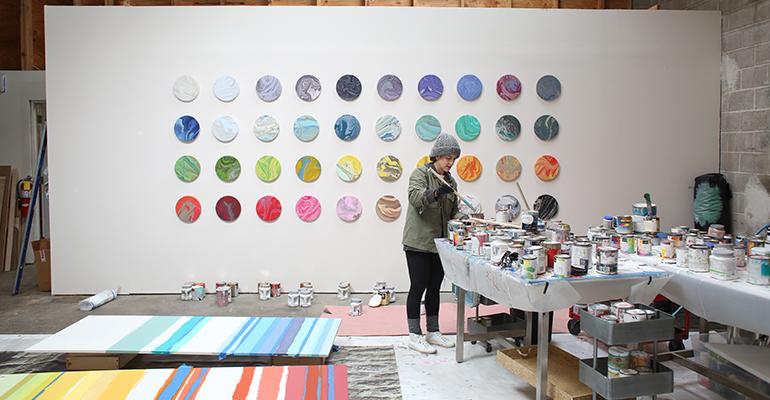 Beauty, as it pertains to art, is said to be in the eye of the beholder. And for the past 30 years, Recology’s Artist in Residence (AIR) Program in San Francisco has transformed materials that were once seen as trash into meaningful pieces of artwork that now promote recycling and reuse.

Recology, an integrated resource recovery company headquartered in San Francisco, kicked off its AIR program in the late 1980s. The program was born from founder Jo Hanson’s street sweeping project.

Hanson was an activist, environmentalist and a noted Bay Area artist and San Francisco arts commissioner whose legacy includes the Women Eco Artists Dialog. Between 1970 and 1998, Hanson filled 102 binders with materials she collected from her daily practice of sweeping in front of the historic Nightingale house, her Lower Haight home. From the mundane to the momentous, her collection serves as visual documentation of an earlier era in San Francisco.

After gaining notoriety for her sweeping and environmental activism, Hanson was invited in 1989 to visit Recology (then Sanitary Fill Company) to see where her sweepings were going. When she saw the enormity of materials there, she proposed an artist residency program. Instrumental in the planning of the program, Hanson was an active advisory board member until her death in 2007, according to Recology.

Since its founding, the Recology Artist in Residence Program has provided more than 200 professional and student artists with large studio spaces onsite at San Francisco’s recycling and transfer station and access to materials in the public dump. The program is part of an education initiative that encourages reuse, resource conservation and sustainability.

On December 13, 2019, the program held its 30-year opening and celebration with an exhibition and tribute to Hanson. That exhibition provided a first-ever look at the relationship between Hanson and the Recology Artist in Residence Program. It also was a rare opportunity to view images of her “Messages from the Street” binders, which are housed in the Fresno Art Museum.

“It is incredible for a program like ours to last this long,” explains Deborah Munk, AIR Program manager. “Since the program’s inception, we have worked with more than 200 artists and held 100 offsite exhibitions, including in downtown offices and galleries, and we held an exhibition at the SFO Museum [San Francisco airport museum]. We like to show work outside of our facilities because it grabs the attention of folks who might not necessarily come out to Tunnel Ave.”

“Our mission is to encourage people to consume less, recycle more, buy less and support local artists,” she adds. 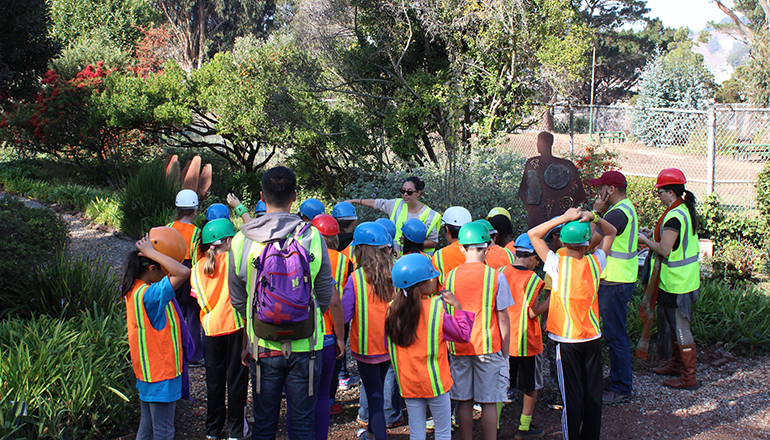 Each year, roughly 4,000 people tour through the site. Attendees include school children, adults and many international groups and business packaging departments, who visit to learn how to better design their packaging and to use better materials.

Munk points out that roughly 120,000 people have toured the facility over the 30 years. Plus, the program has had 90 onsite exhibitions; each one includes work from one to five artists.

“The AIR Program is just one of the ways that Recology engages and educates the public. In my opinion, it is the best way to reach people because it touches the heart, and I only reiterate what Jo said: ‘If you touch their heart, it will initiate change,’” says Munk. “When people come to our openings, they see all these materials that were thrown away and deemed worthless. Then, an artist grabs the object and transforms it into something that is valuable or educational, and we are able to change minds. And that’s the goal of our program. So, we get that aha moment when people come to visit us.”

Coming up, the AIR Program will host an exhibition and reception with its current artists-in-residence Kathy Aoki, Victor Yañez-Lazcano and San Francisco State University student artist Charlotte Beck on January 24 and 25, with additional viewing hours on January 28. The exhibition is the culmination of four months of work by the artists who have scavenged materials from the dump to make art and promote recycling and reuse.

For her residency, Aoki reframes events in contemporary culture through artworks that use humor to talk about serious issues. She considered the Me Too movement, the removal of controversial historic monuments and the promise of the Equal Rights Amendment to produce satirical works in sculpture, installation and printmaking, presented in the format of a natural history museum.

For the Recology exhibit, Aoki initially thought she would use display ads and materials promoting beauty products that she found in the waste stream. But her plan changed when she began thinking about monuments.

“I did a residency in Belgium over the summer, and they have political monuments that they’re ashamed of but that are part of their history, just like our controversial monuments,” explains Aoki. “I have been doing overt monuments for a while. Right off the bat, I found some nicely carved wood columns. I started collecting column and pedestal type objects, and I created a series of disgraced monumental structures. Most of them are made with Styrofoam and covered with papier-mâché from the waste stream.” 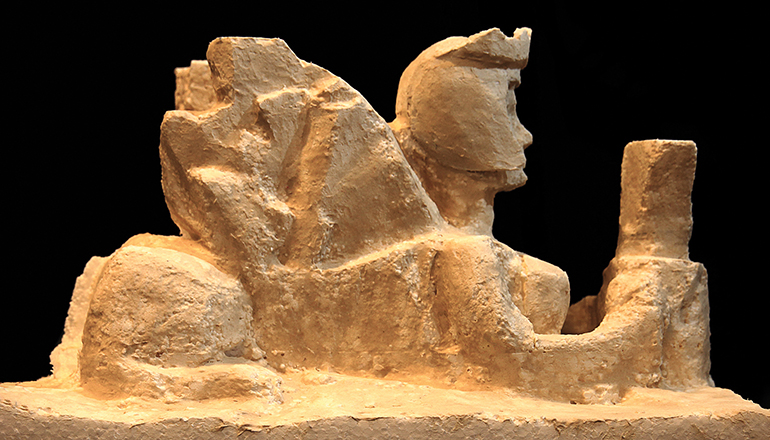 Aoki used Styrofoam from art packaging materials, and some of it was construction grade foam used for insulating walls. The papier-mâché came from a large amount of tissue paper she found at Recology’s studio.

She used a paper cutter to chop her materials, and then used a blender to make pulp from the paper. She also used Elmer’s glue from the waste stream and compounds she found on the floor.

“I’ve been experimenting with various kinds of construction material that comes through the stream and using that to seal the bubbliness of Styrofoam for some of the pieces, so they end up looking like marble,” she says.

This is Aoki’s first show with Recology, though she has exhibited at venues including the San Jose Museum of Art, the San Francisco Arts Commission Gallery and the Pennsylvania Academy of Fine Arts Museum. She has been an artist-in-residence in the Bay Area at the Djerassi Resident Artist Program and the Headlands Center for the Arts, and at the MacDowell Colony in Peterborough, N.H. Her work is in the collections of institutions including the New York Metropolitan Museum of Art, the San Francisco Museum of Modern Art and the Achenbach Collection of the Fine Arts Museums of San Francisco.

“I have such respect for the Recology AIR Program. I also feel like within my own personal life, finally taking action in terms of sustainability and practice is something I could integrate into the show and speak about,” says Aoki. “And it’s something I haven’t been able to speak about before. It is a joy that I can share now with the successes I’ve had with reusing the material.”