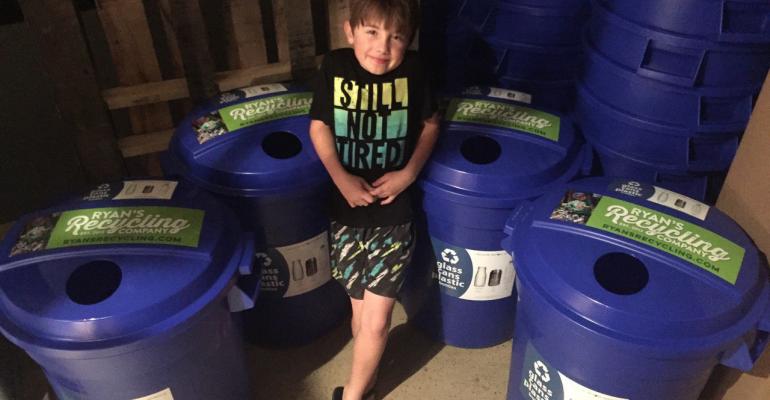 Recycle Across America (RAA) announced a $250,000 grant from Bank of America to create proper recycling in local communities and schools with the use of the society-wide standardized labels for recycling bins.

To date, Bank of America’s support has helped more than 1 million K-12 students recycle right and has helped school districts save more than $5 million in trash hauling fees. Since 2015, the bank has provided $400,000 in grant funding to RAA, supporting its efforts to standardize recycling labels.

“Bank of America’s grant program is helping us quickly scale this critical solution to a national level at a time when U.S. recycling most needs it,” said Mitch Hedlund, executive director of RAA, in a statement. “Much like standardized road signs allow the public to drive properly anywhere in the U.S., the society-wide standardized labels are helping people recycle properly and are proven to increase recycling levels 50 to 400 percent. We’re incredibly grateful to Bank of America for its leadership with this environmental, societal and economic solution, which is helping students recycle right and school districts save millions of dollars.”

“With more than 157 languages and dialects spoken, the Recycle Across America labels have made ‘recycling right’ universally understood for our students and staff,” said Jennifer Fowler, director of environmental compliance at Orange County Public Schools, in a statement. “Since July 2016, Orange County Public Schools has increased recycling by over 5,000 tons. In addition, the recycling program saved the school district over $1 million in expenditures during the 2017-18 school year alone.”

In addition, Ellen DeGeneres and 9-year-old recycling hero Ryan Hickman have stepped in to help people encourage municipal and corporate leaders to begin displaying the society-wide standardized labels on recycling bins throughout their cities and businesses.

This new grant from Bank of America enables RAA to provide standardized labels to 1,000 schools, which will help hundreds of thousands of students recycle properly. Placing recyclables in the proper bins helps improve the efficacy and viability of recycling by reducing the contamination, making the processing of the recyclables more cost effective and making the recyclables more desirable for manufacturers to reuse. RAA is working to implement society-wide standardized labels on recycling bins throughout the country to make it easier for people everywhere to recycle more and recycle right.

“In addition to supporting the distribution of the standardized labels for recycling bins in school districts around the country, Bank of America is displaying the labels on recycling bins in many of our office locations,” said Rich Brown, environmental program director at Bank of America, in a statement. “This is all part of our ongoing efforts to help accelerate the transition to a low-carbon economy.”

The most recent grant to RAA is part of Bank of America’s broader commitment to improving the environment and accelerating the transition to a sustainable, low-carbon economy. It has also committed to carbon neutrality and purchasing 100 percent renewable electricity by 2020.