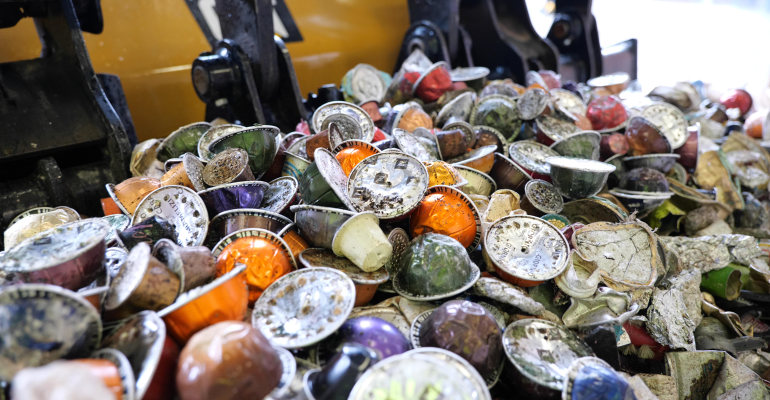 Nespresso doesn’t want its wasted single-use aluminum coffee capsules stockpiling on landfills, so among ongoing efforts to see that they are diverted and repurposed, it’s struck a deal in New York City to recover them and turn them into a commodity. Residents there can now put these spent coffee-filled capsules in the blue bin, and city contractor Sims Municipal Recycling, with $1.2 million from Nespresso, can do what it couldn’t before: get rid of the dirty, wet coffee grounds; sell the remaining clean aluminum, and recover this valuable metal in smaller pieces. The new system also enables Sims to further sort other metals—not just those that go into Nespresso’s capsules.

Sims captures 50 to 60 tons per month of nonferrous metals, of which capsules are a part.

The packaging is only 10% aluminum; the rest is coffee grounds, rendering them of no value to aluminum smelters. But the shredder, one component of the upgraded system that Nespresso footed most of the bill for, allows Sims to open the capsules and release the coffee. A new eddy current ejects pure, shredded aluminum, and the coffee is landfilled.  An added bonus for Sims is that with this upgraded system it can now separate other nonferrous metals, including copper, zinc, and brass among others.

The recycling company was already somewhat positioned to deal with the capsules, as it owns and operates a glass processing plant. Glass is separated into minus 2.5-inch fractions at Sims’ two materials recovery facilities, then sent to the glass plant along with the coffee packaging and other small bits of metals. But the coffee capsules were not getting recovered and Sims needed funds for more infrastructure to capitalize on them.

“If we did not process glass, we could not capture Nespresso’s aluminum capsules. But because we run our own glass plant, we have control of that small fraction of nonferrous metals that we would otherwise have to send to wherever we would transport glass,” Outerbridge says.

“The Nespresso coffee capsules project enabled us to set up specifically to better sort and capture lightweight aluminum and other metals.”

After the capsules are shred, the material is fed into the new system. A magnet removes ferrous metals, and the eddy current separates nonmetallic from metallic materials and further separates aluminum from other nonferrous metals.

Nespresso worked closely with Sims throughout the set up and testing period to ensure its capsules and other small aluminum pieces were successfully processed. Since the equipment has been in operation, beginning late 2019 (though there was a brief lull shortly after because of COVID-19), Nespresso has conducted periodic audits to assess efficacy.

In the U.S., the brand offers recycling bags with pre-paid UPS shipping labels in 48 states. Customers can bring used capsules to UPS drop-off locations, but they can also bring materials to collection points at Nespresso boutiques and select retailers.

“While we encourage New York City customers to use the curbside recycling program as it is an even easier and more convenient way to recycle, we continue to offer pre-paid recycling bags, and customers can choose which recycling method they prefer.

“Nespresso is deeply committed to the circular use of our products, and that means increasing consumer participation in recycling and taking many actions to ensure that it is as easy as possible to recycle used capsules. The curbside recycling effort in New York City further expands our work to provide our customers with a variety of easy and convenient options,” Diallo-Barmettler says.

New York City Department of Sanitation collects the capsules in its curbside program and delivers materials to Sims recycling facilities. The city is the first and so far only jurisdiction to offer this service for the product.

“We are glad to see a manufacturer taking some responsibility for the products it produces, and we look forward to other companies making similar commitments,” says Belinda Mager, director of Communications for New York City Department of Sanitation.

“[Former] DSNY Commissioner Kathryn Garcia has said, ‘We fully support this effort as it helps on our city’s path to zero waste, and we applaud Nespresso for being a strong example of how the private sector can contribute to solving recycling challenges in our communities.’”

Honing in on the city’s relationship with Sims and other external partners, Mager says, “We are a municipality that contracts with a private vendor to process our recyclables. In that way, we need these infrastructure investments to be made with our vendor.”
Nespresso helped develop the first recycling system for its capsules in Switzerland in 1991, then launched the U.S. mail-in program in 2013.

It has also worked with municipalities and businesses in other parts of the world, including to support a curbside program in Paris, which is similar to the project in New York City.

Diallo-Barmettler’s advice for other brands is to not shy away from a big vision or a big investment that has the potential for large-scale, positive impact.

“Our work with Sims Municipal Recycling and New York City Department of Sanitation is proof that with leadership, support, and the right partners across sectors, we can unlock solutions that didn’t seem possible before. Our collaboration in New York City not only resulted in improved recycling of our capsules, but we were able to equip Sims to better handle the estimated 43,000 tons of mixed metals that New Yorkers are meant to be putting into their recycling bins,” she says.

Outerbridge has similar thoughts but adds unique perspective as the private partner and city contractor in this initiative.

“This partnership where manufacturer, government waste operation, and recycler/processor come together is an example of a corporation taking responsibility to help make sure its product makes its way back into the circular economy rather than leaving it to local governments to figure out.

“And it helps us in that we are in business to process materials. If this investment helps us expand what we can take, that’s good for us, and it’s good for the recycling economy.”