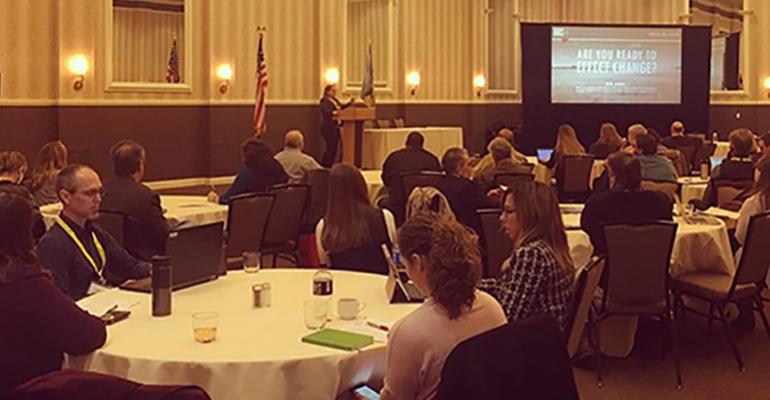 Here are some of the key takeaways from the final day of NERC’s Conference, held in Wilmington, Del.

Day two of the Northeast Recycling Council’s (NERC) conference focused on “Building Better Recycling Markets” was all about post-consumer recycled (PCR) resin. Additionally, industry stakeholders and attendees continued to express their concerns about the general public’s perceptions of recycling based on recent headlines within the mainstream media.

One article in The New York Times struck a nerve among several attendees at the conference. Just last week, The Times published an article about rising recycling costs and how those costs have prompted several municipalities around the country to shut down their curbside recycling programs. Quotes within the article also referred to recycling as in a “crisis” and “dysfunctional” since domestic markets have been limited on what materials they could export to China and other Asian countries.

After one attendee asked the first panel of the NERC Conference how the industry could try to reinvent recycling in the mind of the public after articles like that have surfaced, panelist Liz Bedard, olefins division manager for the Association of Plastics Recyclers (APR), who is also a member of The Recycling Partnership, said: “Where does The New York Times come off saying we have a crisis? We have some problems, but we do not have a crisis.”

Day two of the conference kicked off with a panel on PCR content in the plastics industry before turning to glass, which has become a hot topic of discussion industrywide. Here are some of the key takeaways from the final day of NERC’s Conference, held in Wilmington, Del.

During a panel discussion titled “How is the Plastics Industry Addressing PCR?,” Bedard explained that the industry is currently in the “middle of a perfect storm.” She referred to China’s National Sword and what has been going on with polypropylene (PP), saying 65 percent of collected PP in the U.S.—plastics Nos. 3-7—was exported to China.

“Then, on top of that, we have what I call a tsunami of virgin resins coming our way,” she added. “We know about natural gas and how the price of that has changed so many things. And it has changed recycling as well.” 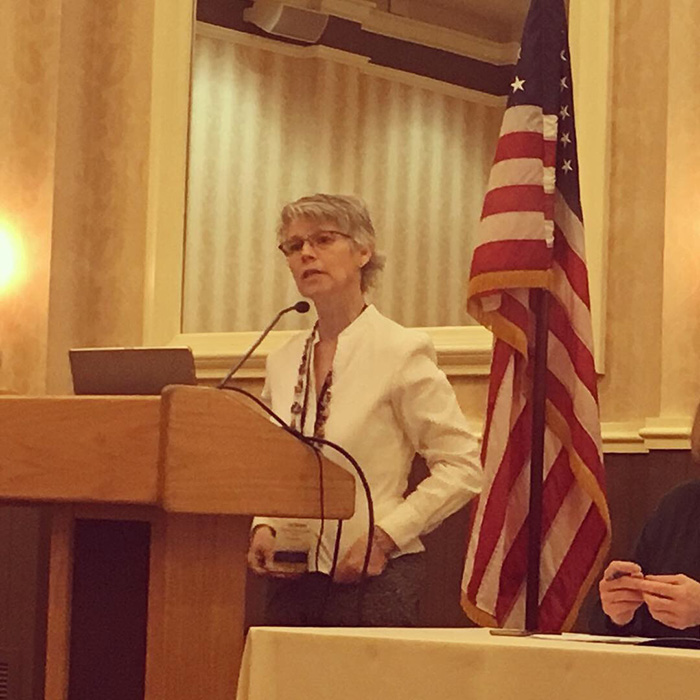 She noted that older PCR competes directly with virgin materials, which makes it difficult for businesses to determine the exact cost of their products. And because of all the volatility in the market, some communities across the U.S. are dropping residential recycling programs.

Bedard noted a potential solution that kicked off in 2017 to address some of the industrywide issues: APR’s Recycling Demand Champions campaign, which is a call to action for businesses looking to proactively address these problems. In a nutshell, the campaign asks businesses and municipalities to increase PCR in their products, increase domestic demand, boost circular economy and help prevent ocean plastics.

“We want to mitigate our reliance on exporting materials. We don’t want to find ourselves in this situation again. That’s what Demand Champions is all about,” said Bedard.

“It’s a wonderful resource when it is managed properly,” he explained. “I don’t like it when people call it waste and waste management. It’s a resource and resource recovery.” 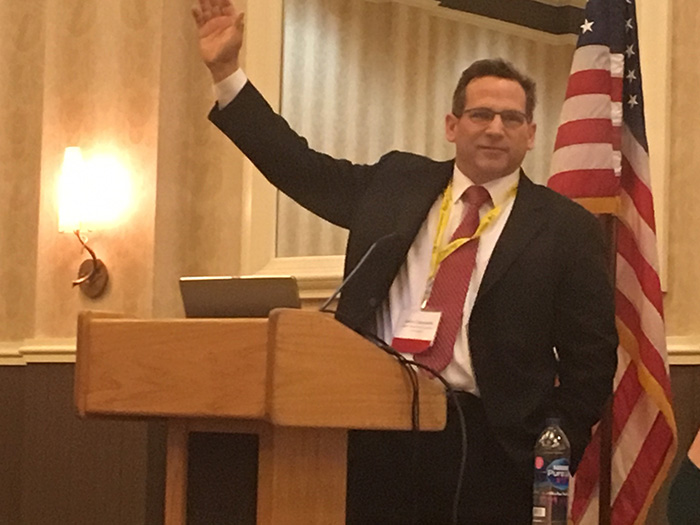 He added that the U.S. produces about 250 million metric tons of waste a year, which is about what China produces. However, China has a population of nearly 1.4 billion people, while the U.S. has a total population of around 330 million.

“We are an excessive country; we use more paper towels than the rest of the world combined,” noted Caturano. “And that’s fine, we just have to manage things differently.”

He pointed to circular economy and how important it is to consider reuse at the forefront of the design process. Nestlé Waters has set an ambitious goal of producing all its plastic packaging from either renewable materials or recycled polyethylene (rPET).

“You can talk about it, but until you’re really ready to do anything, it’s only talk. It’s only action when you actually put it in there,” emphasized Caturano. 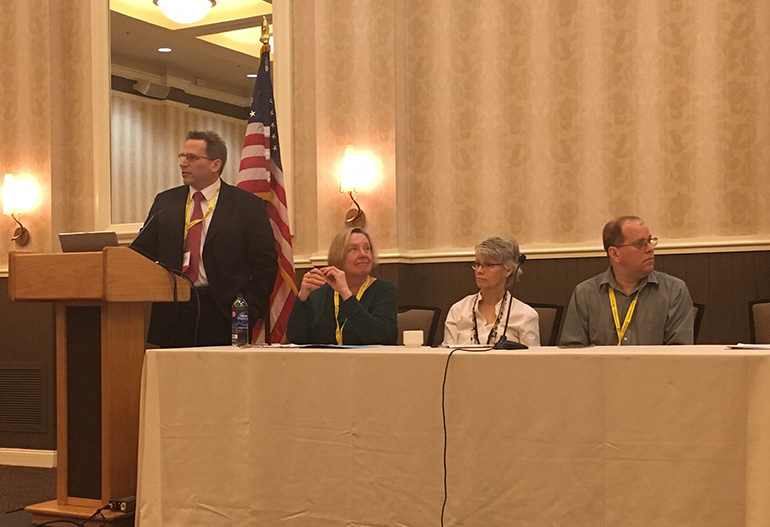 He also noted that the challenge of inefficient resource recovery in recycling systems has a lot to do with lack of infrastructure.

“When you look at the proliferation of plastic, 50 percent of the plastic that has ever been produced has been produced in the last 15 to 20 years,” he said. “It would have taken every bit of effort in our country to increase infrastructure and make changes when that proliferation was happening, but instead, we found cheaper outlets. The bottom line is we were shortsighted in thinking we could keep sending off this stuff and not create our own infrastructure here. And now here we are.”

Then, there is the lack of demand. Caturano stressed that enough companies need to put these kinds of materials back into their packaging by focusing on design.

During a panel session titled “How is the Glass Industry Addressing PCR?,” Will Sagar of the Southeast Recycling Development Council (SERDC), explained SERDC has been working with the Glass Recycling Coalition to address some of the problems out there. 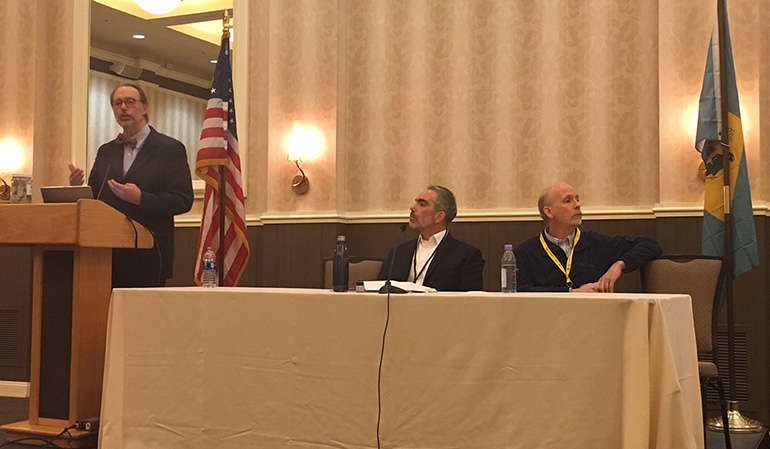 “We are seeing glass problems arise everywhere,” said Sagar. “There’s a lot of talk that transportation is the hurdle that can’t be solved, but there are a lot of processors nearby. Quality matters. Currency exchanges matter. Logistics and transportation matter. Seasonality matters—a lot more glass is collected after the Super Bowl.”

“I would have never guessed that we would have seen the story of aluminum cans piling up, and it has to do with some of our trade regulations,” he added. “China’s barrier is real. It is not going to change, but we are going to recover. We will see these prices come back. Recycling is not dead.”

Sagar remained optimistic and pointed to the investments China has made in the Southeast buying its own plants to take in materials and conduct preliminary processing.

“This is a tremendous good side to National Sword,” he explained. “For one, that material is going to get cleaned up here. That contamination in that bale is not going to wind up in a waterway in China. It’s going to end up as product here in the United States. There are opportunities here for a lot of new jobs and capital investment.” 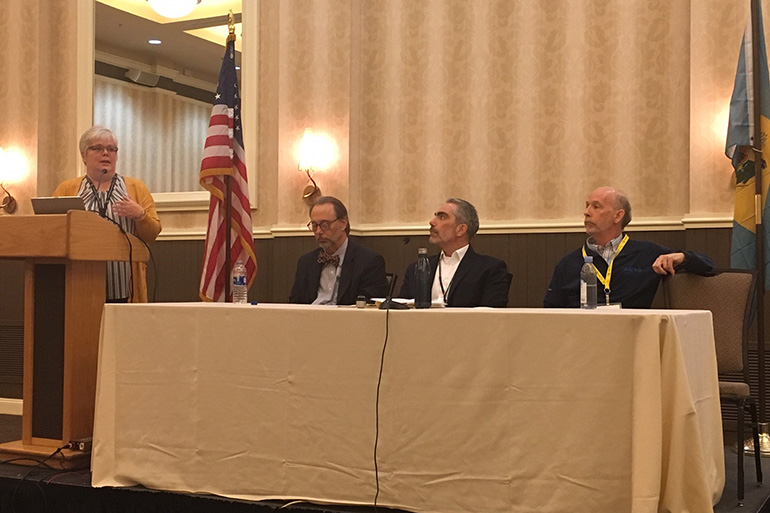 Originally, Owens-Illinois built plants next to its customers—whether they were breweries, food manufacturers, etc. But recently, according to Smaha, a plant in Massachusetts closed, as well as a plant in Atlanta. He also noted a beer plant in Illinois near one of its facilities is slated to close due to decrease in demand.

“Basically, people are drinking less beer,” he explained. “The big brand beer guys are selling less and less. Even at the craft beer level, we are losing the glass market to aluminum cans. That is putting pressure on some of the glass plants that have closed.”

He added that at the end of the day—whether it’s an aluminum can, plastic or glass bottle—it’s going to cost more for the recycled content, which means the consumer is going to have to pay for it. Smaha also noted that raw materials will be less expensive depending on where you are in the country. For instance, he said there is a stronger market for glass on the East Coast, but that the industry is struggling more in the Midwest.

“Virgin material just costs less than recycled glass,” he said. “Brands end up going with the cheaper product containing less recycled content. Unfortunately, that’s just how it works. I do believe that contamination is one of the biggest drivers for our folks. Any ways that we can reduce contamination at the MRF [materials recovery facility] will be passed on along the supply chain.”

Smaha pointed out that switching from single stream to dual stream might be the way to solve the contamination issue, or that more states adopting bottle bills could help.

During the Q&A period for this session, Brooke Nash, who works for the Massachusetts Department of Environmental Protection’s (MassDEP) waste and recycling division, said she was surprised to hear Smaha say there wasn’t a problem in the Northeast with glass.

“Another comment is I don’t see how anything other than recycled content is going to solve this situation,” stressed Nash. “I am honestly really tired of the glass industry. It’s like everybody points their fingers at somebody else—'consumers won’t pay for it,’ ‘it’s too expensive,’ ‘facilities are shutting down because there is a decrease in beer consumption.’ And I really don’t see the glass industry stepping up and doing anything rather than talking about it. We don’t want to stop recycling glass in Massachusetts, but it’s 17 to 20 percent of inbound tons at MRFs and when that is going out of the MRF, it’s $60 to $80 per ton. It costs unbelievable amounts of money for that glass to be collected.”

“I apologize, I didn’t mean to say it isn’t a problem. It is a problem, that’s why we’re here,” explained Smaha. “Massachusetts is still an important source of glass for all my plants on the East Coast.”

He suggested implementing a national bottle bill, in which states would ultimately be on equal footing. Nash then asked about state-enforced content laws where states demand a minimum standard of recycled content requirement.

“I think it gets more complicated because there would be more cooks in the kitchen,” noted Smaha. “I would like to see a nationwide attempt to go at it.”

Jennifer Heaton Jones, executive director for Connecticut’s Housatonic Resource Recovery Authority and a board member of the Connecticut Recyclers Coalition, pointed to Connecticut’s bottle bill, which she said is “probably the worst bottle bill in the U.S.—with only a 50 percent collection rate.”

Smaha noted legislation in Connecticut to modernize the bottle bill and increase it to 10 cents and also increase the handling fee.

“We have a lot of opposition there and the biggest opposition is industry,” explained Jones. “It’s the lobbyists who don’t want to pay a handling fee, yet our distributers are charging that handling fee back to the retailers. But without updating the redemption fee, it’s not successful and we continue to see redemption centers in Connecticut close. We have to expand and modernize these systems. Five cents does not mean what it did in 1975. Nobody cares about 5 cents to go back to the redemption center.”

She added that expansion is needed, but producers and manufacturers have to back these bills.

“We are spending money to process MRF glass because it’s dirty, then we have to process it again,” explained Jones. “So, why not just go consumer to redemption to processor because it’s clean. Why wouldn’t you want that? Most likely because you’re making money off the dirty MRF glass. I don’t know. Until we get everyone on board, we are not going to expand bottle bills.”

NERC is in the process of working on a report focused solely on glass recycling, among other projects.