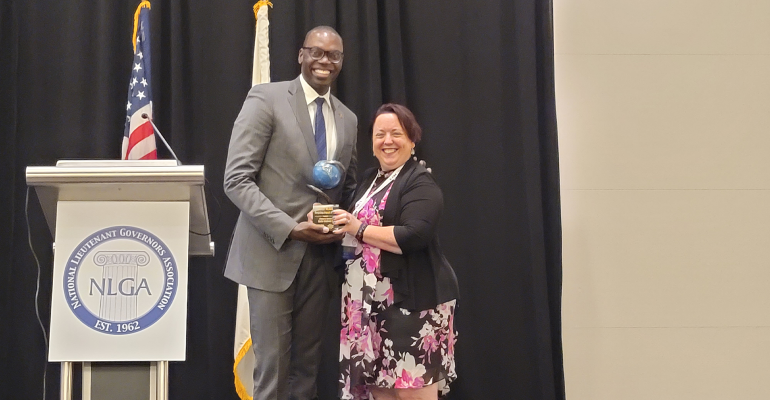 Washington, DC - Recognizing recycling stewardship among state gubernatorial successors, the Institute of Scrap Recycling Industries (ISRI) the Voice of the Recycling Industry™, is proud to announce that Michigan Lieutenant Governor Garlin Gilchrist II today was presented with the third annual 2022 Recycling Impact Award. ISRI, along with the National Lieutenant Governors Association (NLGA), presents the award annually to an NLGA member who is committed to working within a state, region, and/or communities to positively affect resource conservation and recycling.

“Lt. Governor Gilchrist is a valued champion of the environment, sustainability, and the recycling industry in Michigan,” said ISRI President Robin Wiener. “His background in engineering and innovation enables him to see sustainable solutions in the state’s recycling structure. The State of Michigan is fortunate to have his visionary leadership and ISRI congratulates him on this well-deserved honor.”

Throughout his career, Lt. Governor Gilchrist has taken a boots-on-the-ground approach to understand problems in order to create solutions. He is known for using thoughtful innovation, progressive reform, and efficient modernization of policies and programs to the betterment of hardworking families.

“I am honored and grateful to accept the National Lieutenant Governor’s Association Recycling Impact Award,” said Lt. Governor Garlin Gilchrist II. “Since the beginning of our administration, Governor Gretchen Whitmer and I have worked hard to boost Michigan’s recycling rate and protect our environment. Through our partnership with EGLE on initiatives like NextCycle and ambitious investments in local communities, we are committed to making recycling affordable, accessible, and easy for every Michigander. We will continue building a circular economy in Michigan, creating jobs, and passing our natural resources on to future generations.”

From spearheading campaigns for equality and justice to harnessing technology to solve real problems, his focus has consistently remained on serving the public and getting things done.

Lt. Governor Gilchrist brings a lifetime of experience to his role, receiving his first computer at the age of five and setting up a computer lab in a Detroit community recreation center using computers that he built himself at the age of 16. He studied computer engineering and computer science at the University of Michigan, graduating with honors. He later had a successful career as a software engineer at Microsoft, helping to build SharePoint into the fastest growing product in the company’s history.

Lt. Governor Gilchrist spent the next several years of his career as a social entrepreneur and community organizer who helped people in communities across America realize their full economic and political potential. Upon returning home to Detroit, Lt. Governor Gilchrist worked in local government to help build systems that made the government more responsive, transparent, and accountable to city residents. This experience prepared him for a key priority: to bring Michigan’s state government fully into the 21st century on every level.

As part of the Whitmer Administration, Lt. Governor Gilchrist has sought to address injustice and inequity across his state at every level. From co-chairing the Michigan Joint Task Force on Jail and Pretrial Incarceration to helming the Coronavirus Task Force on Racial Disparities, these task forces have taken actions that saved lives and protected the most vulnerable populations. Lt. Governor Gilchrist’s approach to addressing these disparities is deeply rooted in fact-based practices, science, and connecting with individuals across Michigan.

The award was presented to Lt. Governor Gilchrist today during the NLGA Annual Meeting in Chicago.

The Institute of Scrap Recycling Industries, Inc. (ISRI) is the "Voice of the Recycling Industry™." ISRI represents 1,300 companies in the U.S. and more than 40 countries that process, broker, and consume scrap commodities, including metals, paper, plastics, glass, rubber, electronics, and textiles. With headquarters in Washington, DC, the Institute provides education, advocacy, safety and compliance training, and promotes public awareness of the vital role recycling plays in the U.S. economy, global trade, the environment and sustainable development. Generating nearly $117 billion annually in U.S. economic activity, the scrap recycling industry provides more than 506,000 Americans with good jobs.