A Look at International Waste and Recycling Trends and Challenges

While waste management and recycling are global efforts, some areas in the world are ahead of others in setting the tone for the future of the waste and recycling industry. From anaerobic digestion to zero waste initiatives, countries, cities, businesses and foundations are coming up with new and innovative ways to make the concept of a circular economy a reality.

One of the circular economy leaders is the Ellen MacArthur Foundation, which works in the sectors of education, business innovation and analysis. To spread awareness, the foundation has promoted a “butterfly map” that shows the cycles of biological nutrients and nutrients, which illustrates how we should keep organics and plants separate from materials like plastics and metals. By keeping these materials separated, the world can have more organized waste streams to repurpose and reuse various items. 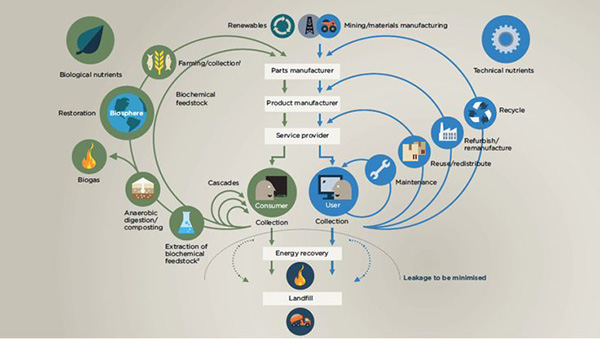 “I participate in the World Resources Forum in Davos, Switzerland, and a lot of discussion in Europe revolves around envisioning our future development in a more sustainable way,” says Zero Waste USA President Ruth Abbe. “We need to design systems for these two cycles so that our products and packaging can be recovered again. The idea is to get away from that one-way trip to the dump concept and think about buying things that can be part of one of those two cycles.”

Recently, Abbe’s father had to dispose of his old doormat, which was made out of plastic and designed to be disposed of in a landfill. He recruited Abbe to help him find a new mat, and she went on a mission to find one that could be composted at the end of its useful life. After searching around at a few different stores, Abbe finally found a 100 percent jute doormat, which is compostable.

“Businesses all over the world are becoming more mindful about the end of a product’s life,” says Abbe. “The furniture manufacturer Steelcase is one example of a business that’s doing this, even though they are in the process of selling new things, they are designed for disassembly and recycling,” comments Abbe.

“In order to make these circular economy cities work, the U.S. would need to develop collection systems for both the biological and technical nutrients so that everyone can have access to proper infrastructure to ensure that these items are properly recircled back into the economy,” says Abbe.

In addition to the circular economy concept, countries are honing in on anaerobic digestion, which is becoming the technology of choice to address the organics stream, according to SCS Engineers Vice President Michelle Leonard.

“Internationally, countries and cities have been doing this for a while, especially in specific waste streams like the municipal solid waste stream,” says Leonard. “We are beginning to develop some anaerobic digestion facilities here in the U.S., but Italy, France and the United Kingdom are at the forefront of these facilities.”

While anaerobic digestion has been around for a long time, it’s a newer technology for commercial businesses. Europe is ahead of the U.S. when it comes to utilizing this process, but it’s really starting to take off in certain areas of the U.S., such as California.

Additionally, Europe is also creating some best practices for extended producer responsibility by developing programs and policies for printed paper, packaging and hard-to-handle materials, which has recently become a hot topic in the U.S.

One global policy that continues to grow, for example, is material banning. From plastic bags to single-use plastics, many countries and cities are creating mandatory source separation and collection policies or banning the use of these materials altogether.

Many single-use plastics are causing pollution in the ocean, which is a universal problem. In Brazil, Hong Kong, the Philippines and other areas of the world, this is a popular topic of conversation. According to SCS Engineers Associate Leslie Lukacs, these specific areas are trying to spread awareness about reducing consumption upstream so that the world doesn’t have this problem downstream.

Lukacs serves on the board of the directors for the Zero Waste International Alliance, which is a coalition of global zero waste associations that meet on a monthly basis to discuss issues like the one mentioned above. Besides focusing on the pollution issue, there is a global interest in keeping organics from entering the landfill.

For example, the 68th United Nations General Assembly declared 2015 the International Year of Soils to increase awareness about the importance of soil for both food security and essential ecosystem functions, and the US Composting Council is focused on feeding soil to promote organics and organics collection. 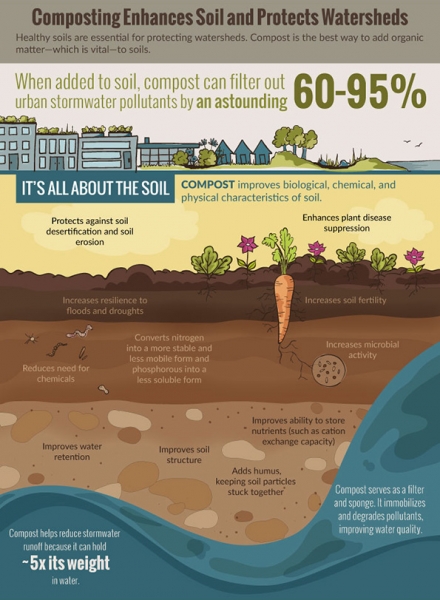 Image courtesy of the Institute of Local Self Reliance.

“For years, some communities across the country have put food scraps and yard trimmings into one bin, which has been problematic for some composters,” says Abbe. “In the Sunnyvale pilot, residents place their yard trimmings into one bin and wrap their food scraps in a plastic bag and place them in the food scraps section of their split-cart. The food scraps are extruded and dehydrated and marketed to animal feeding operations. The pilot program found that residents caught onto the concept of disposing of food waste properly and the plastic bag helped them overcome the ‘ick’ factor.”

The UK has also been progressive with food recovery, and it is ahead of the curve when it comes to recovering food from supermarkets and restaurants, according to Leonard.  For example, Belgian charity organization Corvia installed a 24/7 public refrigerator called Free Go in Belgium where members of the general public can leave food for those in need.

As far as recycling goes, the U.S. continues to suffer with low commodities prices, which are causing major problems for the exporting of resources.

“It’s a wake-up call that the U.S. needs to manage its resources as locally as possible and not depend on Asian countries to purchase its recyclables,” says Lukacs. “The U.S. needs to develop smart market development zones or invest in technologies to recycle plastics. Depending on other countries to purchase recyclables makes it difficult for the recycling business.”

In reality, those who work in the recycling industry will never be able to predict the exact future of commodities markets, but industry members can be more prepared for when the market does make drastic swings.

“There needs to be more of a partnership between the processor and the municipality so that it’s more of a shared risk,” says Leonard. “I think it’s something that is long overdue and something that both NWRA and SWANA are working on to help members of both organizations be more prepared in terms of looking at contracts and addressing the issues of market fluctuations.”

To learn more about these international waste and recycling trends and challenges, join Michelle Leonard and Leslie Lukacs of SCS Engineers and Ruth Abbe of Zero Waste USA at the Trends in International Waste & Recycling session at WasteExpo on June 8, 2016.