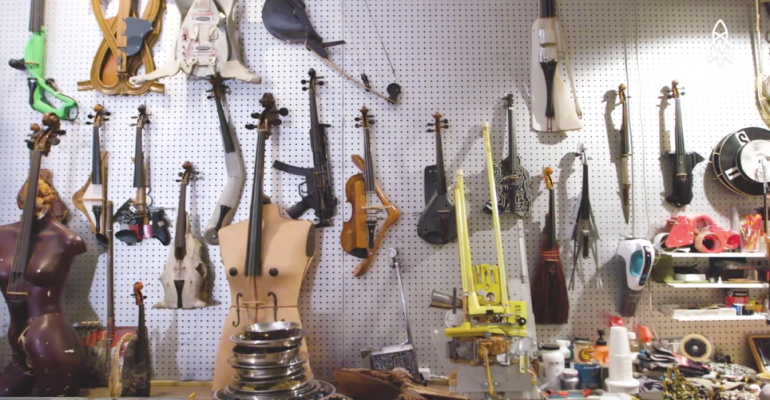 Many people spend their days doing creative things with waste: reusing it, or converting it into new products, or energy, or compost. New York City artist Ken Butler turns trash into musical instruments. And ultimately, into music.

Butler, who studied viola as a child and maintained an interest in music while studying visual arts in France and the United States, loves to scour the streets of his Brooklyn neighborhood scavenging discarded items to make into musical instruments. He estimates that he’s built 400 instruments since he began with a beat-up old hatchet he found in his basement in 1978.

And such heads, necks, and bodies he has fashioned: Butler has built instruments from tennis rackets, showshoes, brooms, shovels, golf clubs, hockey sticks, crutches, pieces of furniture, toothbrushes, spoons, pieces of other musical instruments. The list goes on.

When it comes finding pieces of junk to convert into musical tools, in Butler’s head and hands, the street’s the limit.

Some of Butler’s creations are oddities made mainly to be gawked at, but most of them are real instruments built for playing. And play them he does, all over the world, in museums and concert halls, at music festivals and on television.

Butler creates real music with his junk assemblages, and it sounds lovely.

View a short video of Ken Butler doing what he does here.