Industry: EPA Must be the “Loud Voice” to Advance U.S. Recycling 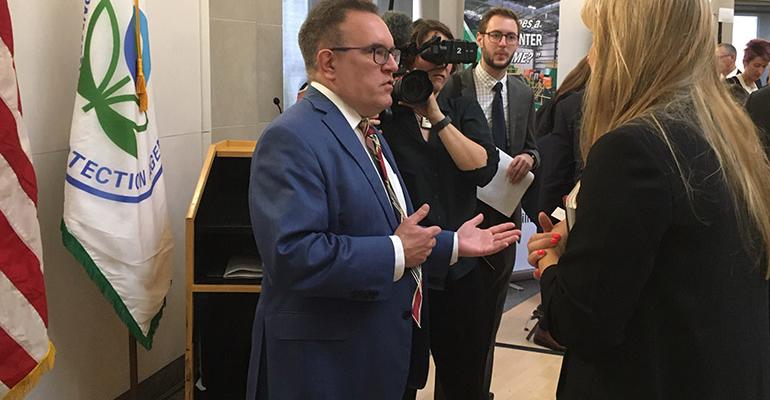 The U.S. Environmental Protection Agency (EPA) unveiled its “National Framework for Advancing the U.S. Recycling System” and highlighted its actions to help solve some key challenges for 2020. EPA Administrator Andrew Wheeler made the announcement during the agency’s second annual America Recycles Day Summit on November 15 in Washington, D.C.

During the event, waste and recycling industry executives and stakeholders urged EPA to act as the prominent voice to deliver the message to the public.

“The only voice that matters is the U.S. EPA getting the message out about all the positive and good things that are happening with recycling,” said Robin Weiner, president of the Institute for Scrap Recycling Industries (ISRI), during an America Recycles Day Summit panel session. “We need that help to bring us all together and get that message out. Another part of the piece is about giving people confidence in the system and telling them what the system does—that recycling is actually producing feedstock material for production. These are commodities. The reason why quality is important is because they’re not thrown in the trash. We need to call the material what it is—it’s a recycled commodity; it is not waste. We need a loud message from EPA that states that loud and clear to communities and to the public. It’s absolutely critical in terms of what need to do.” 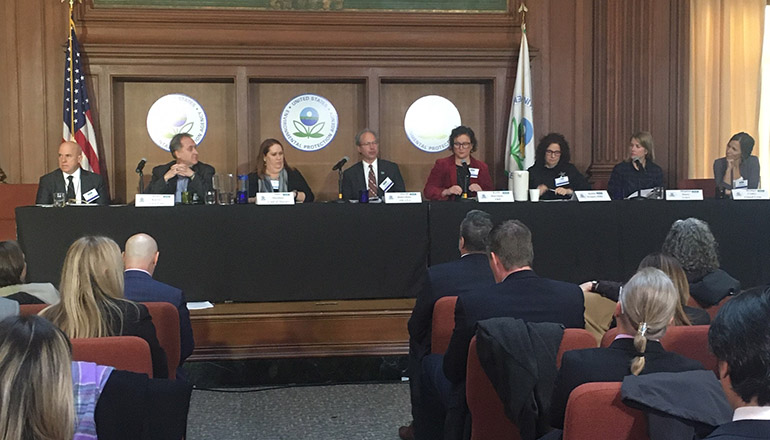 Pledge signers represent all aspects of the U.S. recycling system, including representatives from government, the recycling industry, nonprofits, corporations and brands and industry trade associations.

Anne Germain, vice president of technical and regulatory affairs at the National Waste & Recycling Association (NWRA), told Waste360 that the industry agrees on these four major action areas. As an initial signatory of the America Recycles Pledge, Germain explained that NWRA wants to ensure it has a say at the table when EPA discusses how the public should be educated.

“There’s a lot of nuance that gets discussed by the various interest groups, so we want to make sure that we are able to represent our members and also to convey the importance of continuing to recycle, to make sure that we have a clean, non-contaminated stream and to convey that it’s not recyclable until it finds an end use,” she said. “We all have a part in creating a successful recycling system.”

This year, the agency held its first Innovation Fair on November 14, where exhibitors showcased their ongoing efforts to advance the recycling system via research, education and processes. The Innovation Fair, hosted by EPA, in partnership with ISRI, Keep America Beautiful, the Solid Waste Association of North America (SWANA) and The Recycling Partnership, featured entrepreneurs from across the recycling system who showcased their products, services, outreach and technologies. 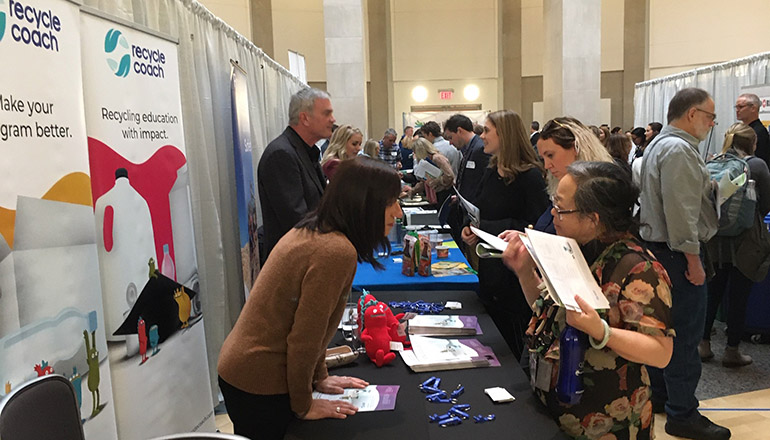 “I am pleased to say that together in the past year, we have taken many important steps. We’ve more than tripled the amount of pledge signatories from 45 to more than 170,” explained Wheeler. “Our recycling system is still facing significant challenges that require sustained efforts to build a more resilient system. Contamination is a major challenge. Not everyone realizes that improper sorting at the consumer level counter our efforts to recycle in the first place. We need to do a better job of educating the American public.”

According to EPA, key domestic recycling challenges include:

“Collaboration is most effective when there are common goals,” noted Wheeler. “That’s why today it is EPA’s intent to develop national goals to measure success throughout the entire value chain. National recycling goals will be set to encourage people to recycle more and to recycle correctly. Let me be clear, I recognize that setting these goals will not be a simple task. But I am confident that by working together we will celebrate our success when we reconvene this time next year.” 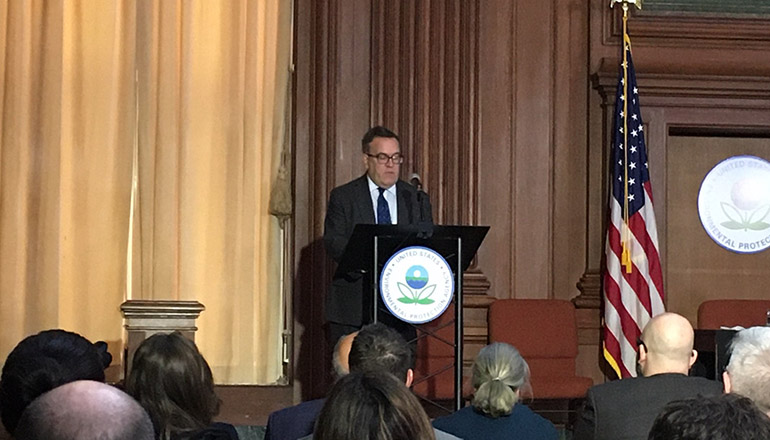 During the November 15 panel session, David Biderman, executive director and CEO of SWANA, explained that SWANA intends to embed the framework into its chapters. He pointed out that contamination rates are still high, particularly in single stream recycling.

“I think national goals are great, but it’s not just about goals; there should also be a loud federal voice on the issue,” he said. “There should be a national campaign around contamination.”

Biderman also added there may be a role for policy and that investments in infrastructure are a critical part of “addressing the challenges we face.” He also stressed the importance of reducing material consumption and reusing when possible before recycling.

Panelist Meghan Stasz, vice president of packaging and sustainability for the Grocery Manufacturers Association (GMA), explained that recycling is an issue that’s important for GMA’s partners.

“We know that consumers absolutely want to recycle. But they are confused on what to do because we have something like 20,000 recycling systems in the U.S.,” she said. “GMA did some research this year and found that Americans say doing their taxes is easier than recycling.”

Keefe Harrison, CEO of The Recycling Partnership, agreed that there is a need for policy and consistency.

“Our research shows that if we want to level out the U.S. recycling system, before you can educate the public about recycling, they have to be able to do it as easily as they can throw something away,” she said. “We have to make sure that everyone at home can recycle. That means we have to make sure that every community has the trucks they need and the staff they need. Policy helps us bridge the gap.”

In order to truly advance a circular economy in the U.S., Harrison explained three things need to happen.

“We need to stop and look at what our landfilling costs are in this country—on average, they are half of what it costs for a community to recycle,” she said.

Step two, is looking at community-wide operational costs, as many communities are doubling and, in some cases, tripling their costs for recycling.

“The final point is we are hearing more and more that producers of products want to be engaged and need to be engaged, but they need a level playing field with trusted partners,” said Harrison. “There needs to be a platform for producers all across the supply chain to really steer effectiveness for our economy.” 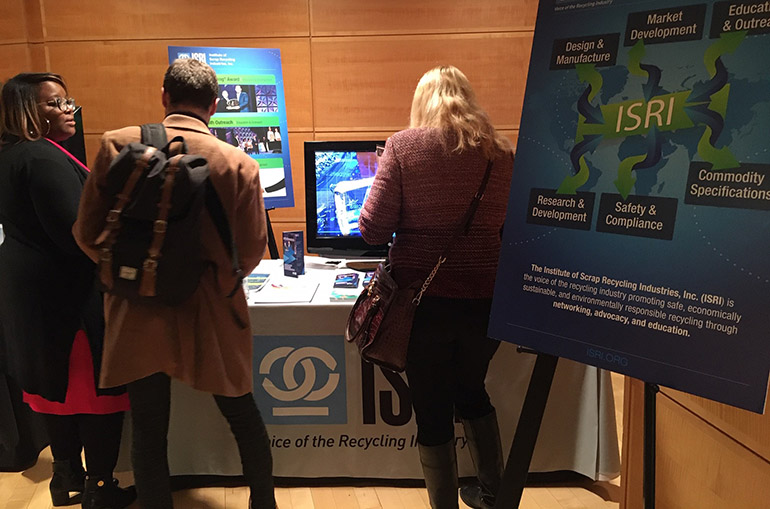 Design for Recycling is an ISRI priority that encourages manufacturers to consider recyclability during product design. According to ISRI, products designed with recyclability in mind:

Not everyone, however, was enthusiastic about EPA’s national framework. Alex Truelove, the zero waste director for U.S. PIRG Education Fund, released a statement claiming the new EPA recycling framework misses the point and fails to address the primary need to reduce and reuse goods.

“This EPA framework falls short on so many levels,” stated Truelove. “More than anything, it’s a disappointment because the agency sidesteps specific commitments to encourage reduction, reuse or redesign.”

“Fixating on a floundering recycling system ignores the fact that we produce way too much stuff, and most of it isn’t designed to be recyclable. In addition, this framework was a perfect opportunity to hold producers accountable for the waste they create,” he added. “But instead they turned a blind eye to that vital issue as well. Consumers and recyclers can only do so much with the abundance of cheap, disposable items that predominate our economy. We need to fix the problem at the source.”

During the America Recycles Innovation Fair, Waste360 sat down with Germain to discuss an informal outlook as the industry looks ahead to 2020.

“We thought that 2019 was going to be a better year than 2018, but 2019 so far has been worse than 2018 from a commodities value perspective,” she explained. “That being said, there has been some progress and some light. Even though commodity values have not improved, we do expect that there will be a lot more opportunities for fiber to be sold. That’s really the main problem. People focus on glass, but fiber is the commodity that dropped so much. If there is an opportunity for fiber and other commodities to recover, things will start to look up.”

Germain added that new paper mills coming online will help, as will contract renegotiations. And moving forward, the industry is keeping its focus on awareness and public education to lower contamination rates and is hopeful for some recovery from a commodities perspective.

“I think EPA’s announcement that it will establish national recycling goals in 2020 was very important and will be one of the main policy items to watch next year,” Biderman told Waste360 after the America Recycles Day Summit. “A second important policy item is whether any of the bills in Congress providing financial support for recycling are enacted. Third, it will be important whether commodity pricing declines, stabilizes or increases in 2020. Some industry insiders believe paper prices will rise in 2020 as new domestic capacity continues to come online.”

“Finally, there are several potential wild cards,” added Biderman. “Will China completely close the door to foreign imports at the end of 2020? What will the impact be of the recent amendments to the Basel Convention, which take effect January 2021 and target certain plastic scrap? Will there be continued U.S. economic growth, driving demand for paper, or will the long-anticipated economic downturn occur, and potentially, depress pricing and capital investment?”