How Orlando, FL and San Marcos, TX Are Stepping Up Multifamily Recycling 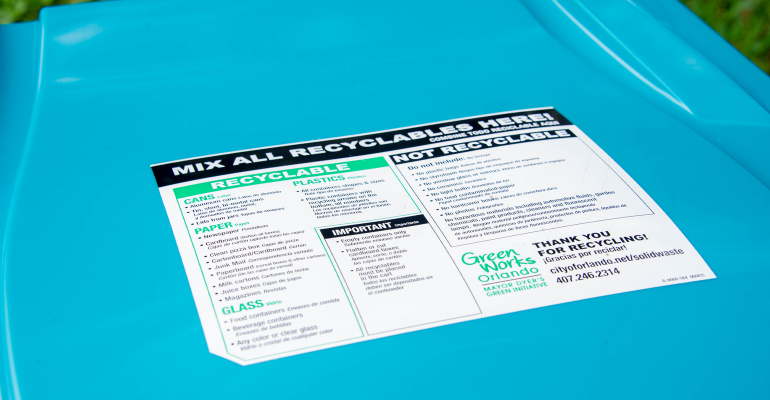 More than 13 million multifamily units in the U.S. have no access to recycling, estimates The Recycling Partnership, creating a wide gap in service. A growing base of municipalities is trying to figure out how to close that gap, with the pressure on as some of them set zero waste-to-landfill goals –and as they field flurries of calls from residents asking for service. Orlando, Fla. and San Marcos, Texas have become poster municipalities of sorts that are aggressively targeting recovery in multifamily buildings. Both jurisdictions share with Waste360 unique challenges in their communities; ways they’re working through those challenges and how their strategies are panning out.

In Orlando, the ratio of single-family to multifamily dwellings is almost one to one. There has been an outpouring of requests for an easier way to recycle from that large multifamily piece of the pie, says Evan Novell, sustainability product manager, City of Orlando Solid Waste division. The six drop off locations in place for some time were not enough to accommodate the whole community, and some people were hauling loads of what they couldn’t recycle at home to work.

In response to the demand, coupled with a 2040 zero waste-to-landfill goal, the city implemented an ordinance in 2019 requiring multifamily property owners to provide service; resident participation is voluntary. Properties must have appropriate containers and ongoing service, and each one has to submit a recycling verification form to the city to include information such as point of contact and details on the recycling process. Then the city issues a certificate of compliance.

The ordinance is in the last of four phases with the first including new properties or renovated ones. The second phase targeted largest properties – those with 250 units or more. Phase three brought 75- to 249-unit properties into the picture. And the final phase, zeroing in on  four- to 74-unit properties, is slated for completion April 2023.

The four-year phase-in has been key to making the huge transition work, Novell says.

“Properties may have to rearrange budgets or account for additional service and set up for it. Whether there are financial or spatial considerations, it can’t happen overnight, so taking the route we did seemed conducive to more acceptance and willingness from property management. And it allows us to adapt to the influx of new customers and contamination from those who have not recycled before, or maybe recycled in different locations,” he says.

The city does not shoulder the whole burden for the expanded territory; private haulers and valet service providers (who go door-to-door) are part of the growing materials recovery scheme.

But implementation has been a lot of work. Each multifamily property has unique set ups, operations and challenges; so, there are no cookie cutter solutions. There are considerations around where bins are located.  Can trucks access those locations? How many units and what materials does the property generate? What language does the community speak?

Orlando found that some communities were bound by neighborhood association rules and that some of those associations’ guidelines did not meld well with the ordinance.

“We try and keep it equitable [in all communities], but since certain neighborhoods had guidelines on what can and can’t be done on that property [for instance installing double enclosures required by the ordinance], we have had to issue temporary exemptions when property owners can’t comply by a given date.

“So, there are a lot of variables that have to be taken into account when implementing a recycling program. It’s understanding and addressing obstacles unique to that property and moving forward with a program to include containers, education, signage, and having property management on board for that process,” Novell says.

The ordinance is meant to increase recycling opportunities; it takes buy-in across the board to be sure communities seize those opportunities. So residents, businesses, city departments, and officials all came out to discuss how the rules would play out before the proposed plan went to the city council. The goal of getting that buy-in and recovering more good, clean materials also influenced the decision to make recycling voluntary for residents.

“It has to be available, but at the end of the day we do not want millions of tons of contaminated material. We want people to be motivated to recycle right. It’s a less intrusive policy [than enforcement],” Novell says.

Today, after much experimenting and learning, the city has a working system in place where it manages the contract, unlike jurisdictions like Orlando where property managers take on this oversight role.

Recycling charges apply per unit and are managed through the billing system for electricity in order to streamline accounting. Residents are billed directly if they have their own electricity meters. If the building or complex has a master meter the property manager handles the payment process.

Lessons gleaned from the pilot helped set up for success.

Through this early project, there were three ways to work with multifamily residents. They got educational materials, mainly a magnet with recycling information; or a magnet and a bin; or education, a bin, and valet service.

“We audited certain complexes before beginning the pilot to know recycling and contamination rates, and then audited afterwards. We did not see a change in participation when residents just got magnets.  We saw some change with magnets and bins. But we got a 60 percent increase in recycling and saw substantial decreases in contamination with all three: valet, magnet, and bin,” says Amy Thomaides, Community Enhancement Initiatives manager, Resource Recovery for San Marcos.

“We think the valet service made the biggest difference because they did not have to think about it. [They just put recycling outside their door as they do with their trash],” she says.

The city turned to The Recycling Partnership for ideas on container type.  Being a college town, San Marcos gets a lot of cans, bottles, and pizza boxes. So, they went with 18-gallon bins and sent out flyers on how to use them.

Today, with the pilot over, the city offers 18-gallon bins to residents at their request. And it’s about to contract for valet. Anticipating ongoing growth in recycling rates, the plan is to eventually put out recycling dumpsters with lock bars to supplement.

Learning through experimentation and innovation has been a common thread in trying to figure out how to capture more materials.

Going back to pre-pilot days, Thomaides started a recycling competition with apartments.

“To this day, we keep tabs on contamination by randomly doing deep dives into carts and dumpsters to learn what the biggest contaminants are. And we are always looking at how to innovate to make sure residents have the right container and all materials are going in that container,” she says.

Now the city is looking to pilot a dumpster with a slot for pizza boxes; it gets mountains of them. The idea is to limit what goes in the dumpster but capture the targeted material.

“We are working on all kinds of ideas. Now we are looking at multifamily composting drop off sites.  I am working with a professor at Texas State University to see how we can get compost to them to use at their facility,” Thomaides says.

Both Orlando and San Marcos got grants from the Recycling Partnership to advance multifamily recycling.

Says Craig Wittig, The Partnership’s director of Community Programs: “The Recycling Partnership is ultimately looking to add new access for multifamily properties and/or drive new tons …by optimizing participation.  This could mean adding new recyclers that are not currently participating in an existing program. Or it could mean encouraging existing multifamily recyclers to recycle more.  The Orlando grant showed the obvious ability of an ordinance to add new access. And the San Marcos grant demonstrated that techniques exist to drive increased participation.”