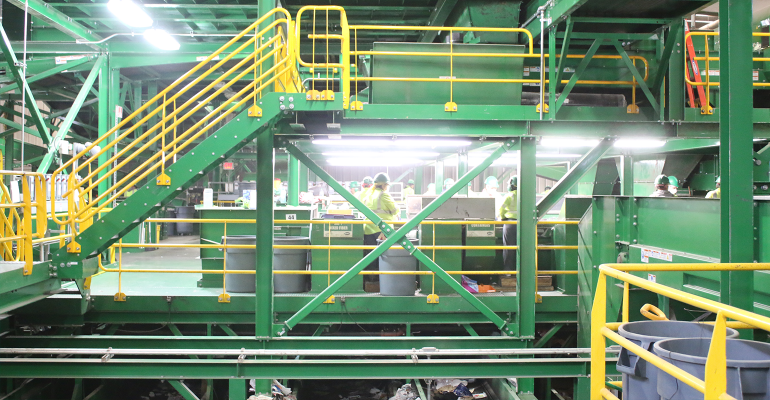 GreenWaste Recovery says it has one of the most advanced recycling and waste processing operations in the world with a robust network of dozens of high-tech sortation and separation systems that process up to 1,800 tons of curbside recyclables and trash. And the San Jose, Calif.-based operation is gearing to scale; it’s permitted to do 3,500 tons per day.

The system includes a sizable inventory of optical sorters, smart robots (some with multiple arms and heads), air compression sorters, metals separators and polishing screens. With all its moving parts the operation manages three separate lines: a clean yard waste line that separates leafy and woody debris; a garbage line that separates out recyclables; and a curbside line that further cleans and sorts what residents put in their blue bins. The company diverts between 85 and 90 percent of everything it takes in.

The intricate system wasn’t cheap. While GreenWaste won’t disclose a specific dollar figure, Emily Hanson, chief strategy officer for GreenWaste Recovery, said the company has shelled out tens of millions in this advanced setup in the last several years. But the investment made economic sense, the decision makers figured.

“We don’t own a landfill. We are a collection and processing company. So, if we can process and recover as much as possible it is generally less expensive than paying someone to landfill it,” Hanson says.

Having all these bells and whistles provides GreenWaste and sister company Zanker Road Resource Management a competitive edge on the hauling and processing side, plus it’s been a means to stay in front of regulations.

“We see where the regulations are going; they are becoming increasingly more stringent, and less and less is allowed to be buried. So, we have a commitment from our ownership and executive teams to invest upfront, so as demand for higher diversion services emerges, we are ready to promptly deliver. It’s kind of like the principal, if we build it, they will come,” says Hanson.

The curbside recycling line runs eight optical sorters, one eddy current for nonferrous metal, a magnet for ferrous metal, a Nihot sorting machine using air to separate materials by density, and two robotic Max-AI units, one which has two heads and works on what Hanson calls the “last chance line,” to catch recyclable materials that may have slipped through, and the other that targets cartons and mixed-material containers. 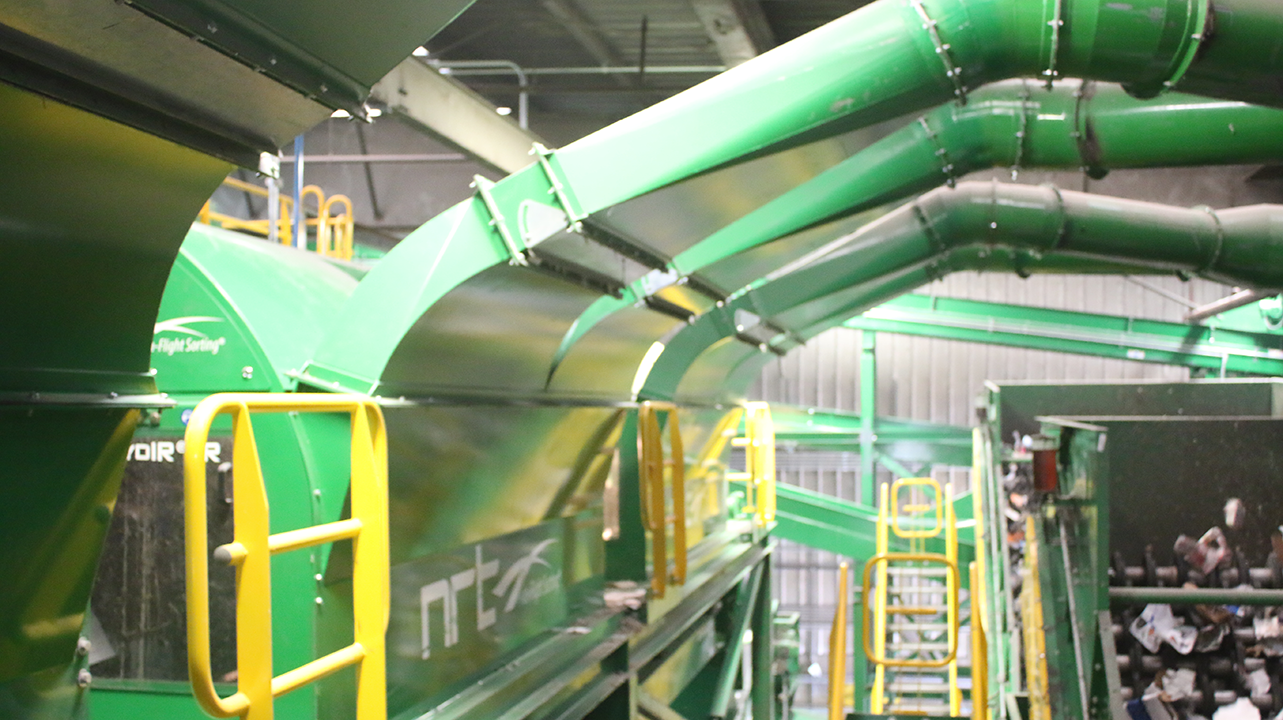 Materials on the curbside line start on a conveyor belt with manual sorters pulling off large rigid plastics, metals and tanglers, such as cable wires and garden hoses. Next the material drops onto an OCC separator where cardboard is separated, then goes through quality control with up to five manual sorters. Glass drops through screens and goes through the Nihot density separator where it is separated from all other materials that fell through the screen. The remaining materials go through several polishing screens where 2D (fiber and films) and 3D (bottles, cans, and containers) are separated.

The lightweight 2D items travel through optical sorters to separate fiber from film and other contaminants.  The 3D materials go onto a container line with optical sorters, a magnet, an eddy current and the Max-AI unit that targets cartons. Finally, remaining, unselected materials are processed by the Max-AI prior to becoming residue.

The 2D materials then go through an optical sorter to separate fiber from film.

Three-dimensional materials move on to the container line where metals are processed by an eddy current and a magnet, and optical sorters pull high-density polyethylene (HDPE), polyethylene terephthalate (PET), and plastics #2 - #7. Each of these streams then travel to their own Max AI that performs quality control prior to going through a final manual quality control station.

The clean yard waste operation isn’t quite as elaborate, but the technology serves its purpose, separating leafy from woody debris, with the separated streams moving on to Z-Best, a compost facility about 35 miles away.

By separating material, Hanson says, GreenWaste is able to reduce volumes to more easily transport it.  The leafy material is composted, and the woody fraction goes into a mulch operation. 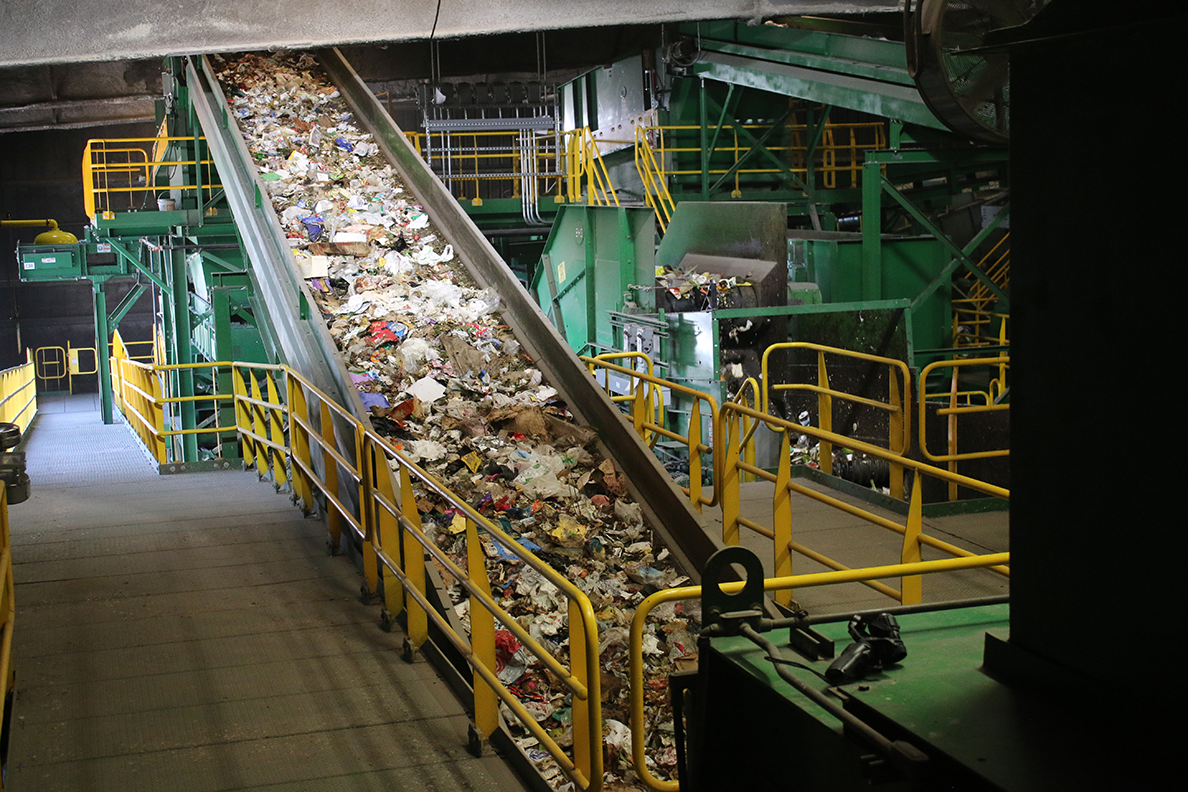 “Most processing facilities are cherry-picking higher value material like cardboard, aluminum and PET," she says. "But we want to landfill as little as possible. And if we start to see new materials, we can separate and start looking for markets.”

She exemplifies with CD’s and DVDs, “We have been pulling them and found markets for their PET. Do we make money? Not necessarily, because sometimes we have to pay to recycle them, but do we get higher diversion? Absolutely. And this gives us a competitive edge. So, if we have to invest time and money to process rather than bury, it is worth it.”

The Environmental Services Department of San Jose provides trash and recycling services to one million residents. GreenWaste is one of its contractors.

“It’s definitely challenging to try our best to make sure one million people are recycling right,” says Jeff Anderson, senior environmental program manager of the Environmental Services department for the City of San Jose.

It’s why when GreenWaste began recovering recyclables from garbage, the city bought into this service right away.

“It’s increased our diversion quite a bit," says Anderson. "We have partnered with them for 30 years now.  In those 30 years, there’s been China’s National Sword, COVID-19, and to an extent market fluctuations, which we had to adapt to. Being able to count on GreenWaste to continue to innovate is good for the city, and it’s good for our residents."