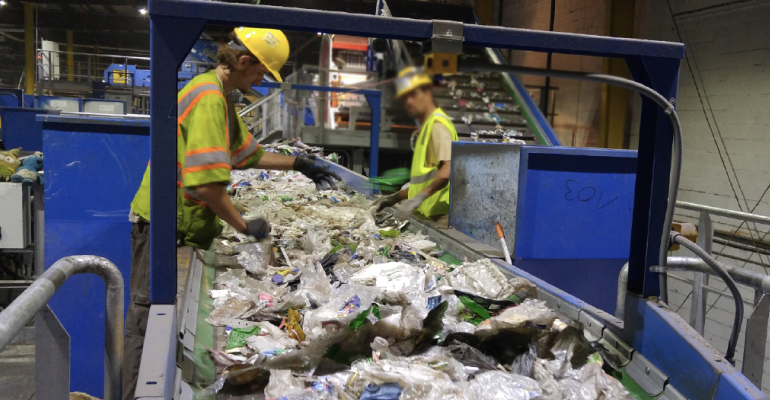 The Recycling Partnership (TRP), a national nonprofit committed to improving recycling, estimates that contamination costs the U.S. recycling system at least $300 million every year. And, as the organization points out, this cost “gets passed down from the processors to the haulers, the communities, and ultimately the residents—and puts a strain on the entire recycling system.”

So, The Recycling Partnership launched its West Coast Contamination Initiative (WCCI) with the goal of increasing “the quality of recyclables collected at the curb in communities up and down the West Coast.”

In order to assess the current situation and identify opportunities for improvement, TRP surveyed cities with populations of more than 50,000 people, residents from these cities, and material recovery facilities (MRFs) in California, Oregon and Washington. The research took place in 2019 and has been compiled into the inaugural WCCI Research Report.

TRP found that the current infrastructure, coupled with positive attitudes toward recycling, puts the West Coast in a good position for residential-recycling success. More than 95 percent of surveyed residents said that they recycle, and 92 percent said recycling is important to them. However, as is the case in most markets, contamination is an issue. California cities reported inbound contamination rates of 20 percent on average; in Oregon and Washington, the rate averaged 11 percent.

When contamination is decreased, or the quality of recyclables is improved, “there is a compounding positive impact to the fate of the collected materials and the financial wellbeing of the system that benefits all stakeholders.”

TRP’s research showed some common concerns between the cities and MRFs across the region surveyed. Plastic bags ranked in the top five contaminants for all groups, and needles were also a commonly cited issue across MRFs. “Non-program plastic” also showed up as a top problem for cities in each of the three states. TRP notes that, “These common issues provide an opportunity for states, cities, and MRFs to collaborate on messaging to residents across the entire West Coast. Providing the same messaging where residents live, work, study, shop, and play will help to ensure positive actions as a result of those messages.”

This learning applies to cities and MRFs around the country as well. Cody Marshall, Chief Community Strategy Officer of TRP told Waste360 that, “there are major trends we see in these three West Coast states that are similar to other parts of the country. For example, the top contaminants that are reported by MRFs on the West Coast are very similar to MRFs on the East Coast and in the South. Plastic bags and wrap(s) along with hazardous waste like batteries and needles are always highlighted as the most detrimental contaminants.”

TRP also identified other specific challenges on the West Coast that, if addressed, could help reduce contamination from the residential recycling stream:

The report digs into the plastic-bag contamination problem and concludes that this behavior of putting plastic bags in recycling bins “is driven by the misunderstanding that all plastics are recyclable, the chasing arrows means the item is recyclable curbside, recycling more is better, and the recycling system will fix mistakes that residents make.” It also notes that many survey participants said, just “finding out that plastic bags cannot be placed in the recycling cart was motivation enough to change their behavior.” There is, thus, a need for raised awareness, which should lead to an improvement in behavior.

Although 85 percent of residents surveyed felt satisfied with their recycling program, “they feel that more information on what, where, and how they can recycle is the number one thing that would make recycling easier for them.” The surveys showed that residents most frequently look for recycling information online.

The report’s conclusions and recommended next steps are:

In summary, “West Coast states have built a strong recycling culture. While they are collecting more recyclables than the national average, there are materials not being captured. If we do not continue to provide clear messaging to residents, contamination will continue to be and will grow as an issue.”

So, as noted by Marshall, “Now we do the work! While doing these surveys and research [we] connected one on one with stakeholders up and down the West Coast to learn about what local governments and MRFs need for support. At the end of last year, we held two workshops before writing the report, one in Los Angeles and one in Portland. There, each community received special collateral we created for them to customize based on what we learned from our research.” He also emphasized that TRP is “always looking at ways to learn more about the landscape of residential recycling and how different regions are impacted by market variability.”

Additionally, the organization is now providing grants to cities and counties to help improve curbside quality and grants for multifamily recycling. Since the launch of the WCCI work in 2019, the organization has awarded eight grants totaling more than $1M.

Finally, Marshall encourages “community and MRF programs to dive into the report’s addendum and use that data to inform their programs. We provided that information so people can make their own conclusions as they are working on their curbside programs.”