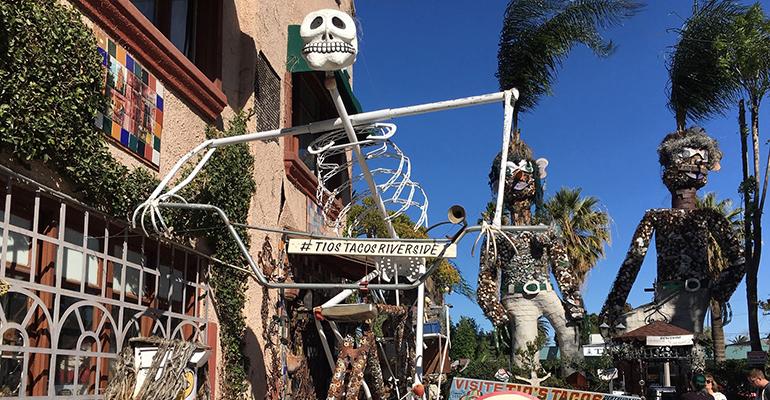 Start Slideshow ›
A Mexican-American artist and owner of Tio’s Tacos restaurant in Southern California has created an acre full of garden art made solely from recycled materials and discarded waste.

Walking onto the grounds of Tio’s Tacos, a Mexican restaurant in Riverside, Calif., visitors are greeted by a giant skeleton riding an old rusty bike. In the backdrop are a couple of even larger structures standing against two palm trees: a man and woman composed of plastic bottles, cans, old light bulbs and other miscellaneous materials.

Those are just a few of the structures Tio’s Tacos owner Martin Sanchez has on display outside his family-owned restaurant. Sanchez has created an entire acre full of garden art made solely from recycled materials, waste and a wide variety of items others might consider junk.

Sanchez is a Mexican immigrant from Sahuayo, a small town in the state of Michoacán. He came to the United States at a young age and lived in poverty throughout his childhood.

According to a plaque on the company’s property, Sanchez had always aspired to get out of the poverty he was surrounded by in Mexico. And that’s exactly what inspired him to find a purpose for items that would have otherwise been discarded or considered useless. Now, he and his family are the proud owners and operators of Tio’s Tacos, where they serve authentic and traditional Mexican cuisine.

“The poverty which he lived in during his childhood gave him the [drive] to save and reuse items from day-to-day use that the majority consider useless and discard,” according to the restaurant’s website. “To him, these items are considered treasures. With his ingenuity, creativity and drive, he has rescued average items and has given a new meaning to going green.”

Check out some of the images of Sanchez’s work compiled in this gallery.