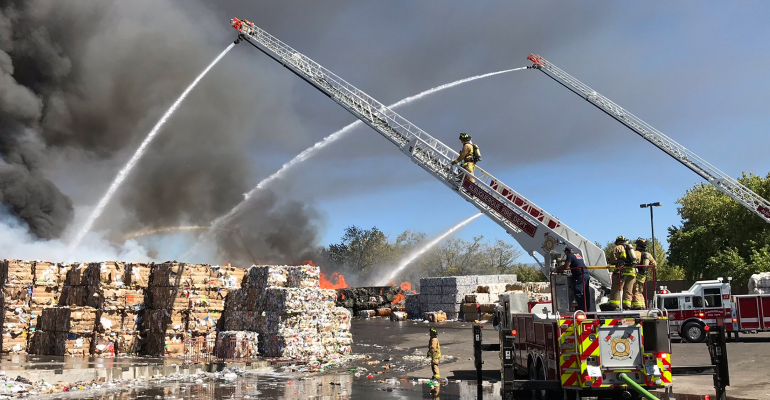 We can all agree that 2020 was not a typical year. The term “change” arguably had more power in 2020 than in any other time in our collective memory. From a waste and recycling perspective, we saw both slowdowns and shutdowns. We experienced ebbs and flows in the tonnage and types of materials we processed. In waste, paper and plastic, we experienced an evolution from commercial tonnage to residential tonnage, as a large percentage of the population made the shift to work from home. In scrap metal, construction and demolition (C&D), and e-scrap, we saw our tonnage increase heavily toward the back half of the year as the economy began to ramp back up from a slow 2nd quarter. 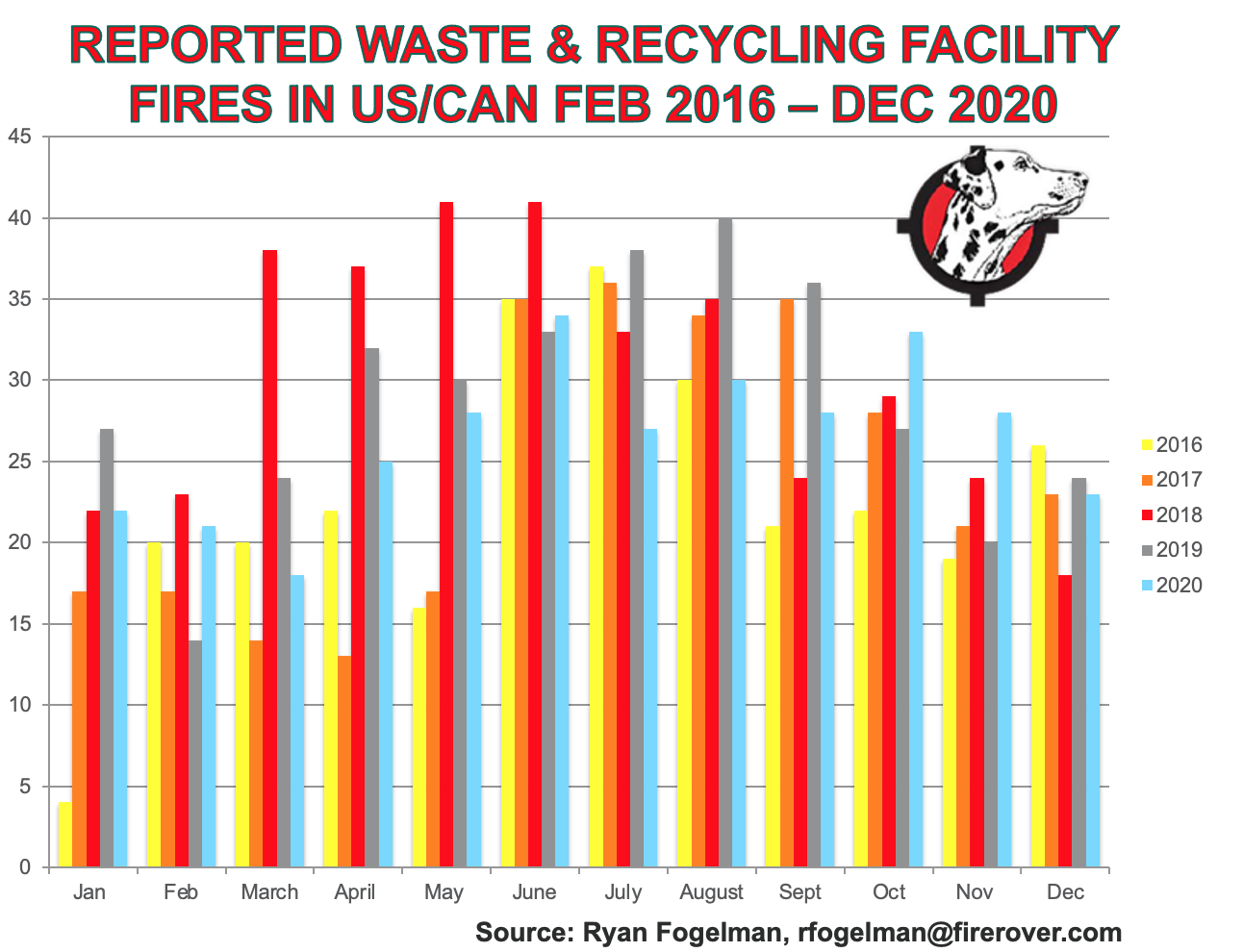 In December, we experienced 23 fires at our waste and recycling facilities. Of the fires, 13 fire incidents occurred at scrap metal/e-scrap/C&D facilities, nine were waste/paper/plastic fires and one occurred in an organics operation. At Fire Rover, we extinguished 16 fires at our clients’ facilities; eight of those fires were at waste and recycling operations and seven occurred in scrap and C&D operations. We incurred four fires in e-waste recycling operations in December, which is surprising because we only experienced seven e-scrap fires during the rest of the year. 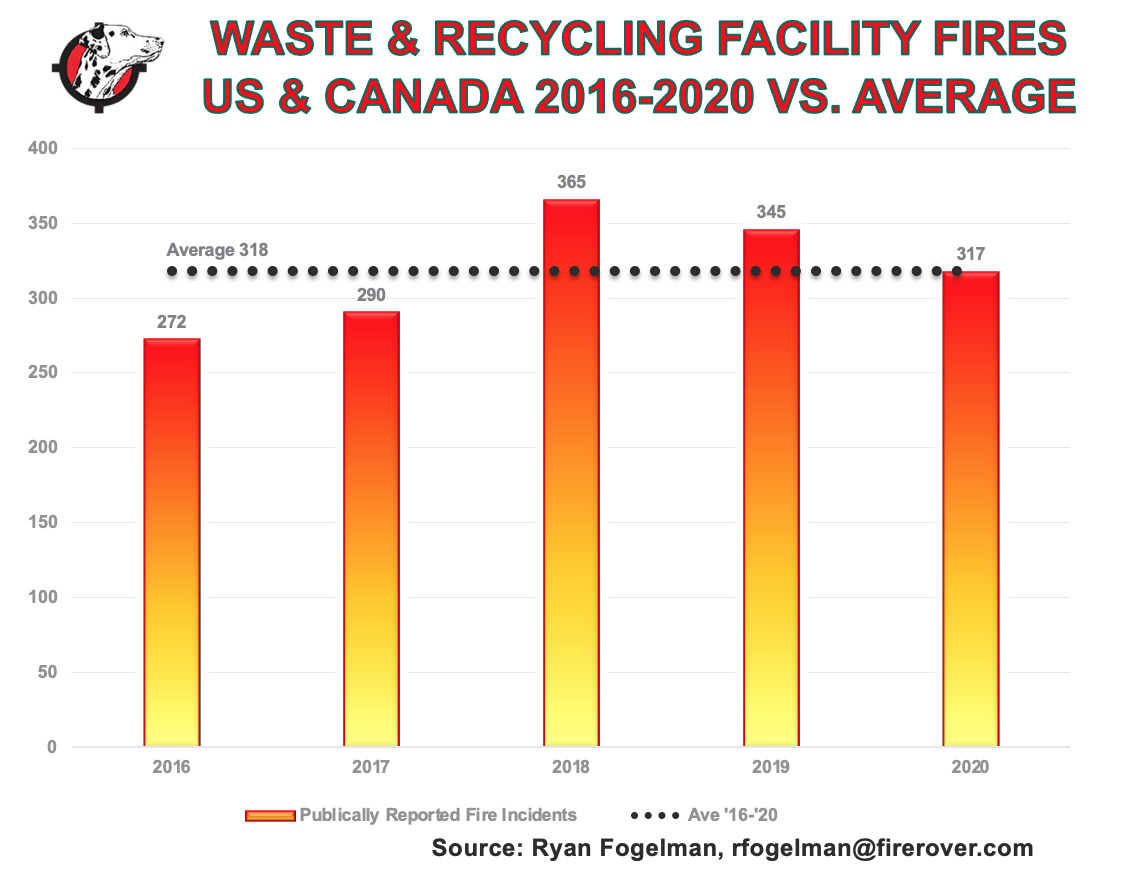 In 2020 the waste and recycling industry has experienced 317 reported facility fires in the U.S. and Canada. Additionally, we incurred 23 reported injuries and three deaths that can either be directly or indirectly attributed to these fire incidents. Based on reasonable assumptions, we can extrapolate that 1,800-plus facility ﬁres have occurred during that time, which, based on the number of facilities reported by the Environmental Research & Education Foundation (EREF), is more than 40 percent of the industry. I define “reported facility fires” as any fire that has been reported by the media that occurs at a waste or recycling facility in the U.S. and Canada. Typically, the fires that are reported by the media are larger fires that require fire professionals to arrive on scene and where there are affects that the public can witness.

Now that 2020 is in the books, I have begun to start the process of understanding what is going on in our industry from a fire incident perspective comparing this year against the historical baseline. I am hard at work on the newest version of the “Reported Waste & Recycling Facility Fire Annual Report” that I have published since 2017.  As with other years, I will dig into detail by state, providence, type of materials, tonnage processes and more. In the meantime, let’s take a look at some of the high-level numbers.

In 2020, 317 fires were reported by the media outlets. Compared to the past five years, we are directly in line with the average of 318; down from our spike in 2018, when lithium-ion batteries in our waste and recycling streams took us by surprise; and up from our years prior in 2016 and 2017. So, the question all of you are asking is, how are we doing?

Let’s take a look at the reality of what the waste and recycling industry is facing:

Let me try to break this down. The reason I have been focused on consolidating the number of reported fire incidents since 2016 is that this data is representative of the bad fires, not the small fires put out quickly by a loader or employee, but the two-to-seven-alarm fires that affect the public and the media gets involved to report the incident through their channels. The fact is that most fires that occur on a tip floor, in a shredder, in a light tin pile or in an automotive shredder residue pile are caught and dealt with by the operator when they are small and manageable.

Typically, a loader or crane segregates a hazard away from the rest of the material, and then eliminates the hazard by either stamping on it or dousing it with water. Most of the time this works, but I stress most of the time. If you take a look at the incident videos on the Fire Rover YouTube page, you will see there are a number of incidents where the loader goes in to segregate some material and the fire is either deep-seated or combined with an accelerant, causing a hazard that cannot be eliminated by segregation. Then there are those where the human element is not present to see the fire, either after hours or in locations that aren’t monitored. Historically, these fires were not reported.

What has changed is that along with the reported fires we are seeing, another channel for extremely reliable data has emerged. The Fire Rover incident database not only allows us to see firsthand how our solution is performing, but it is a reliable source of real data that allows us to understand the fire hazards we are facing as an industry. I began publicly reporting this data this year, which you can view in the chart as “Fire Rover Client Saves.” 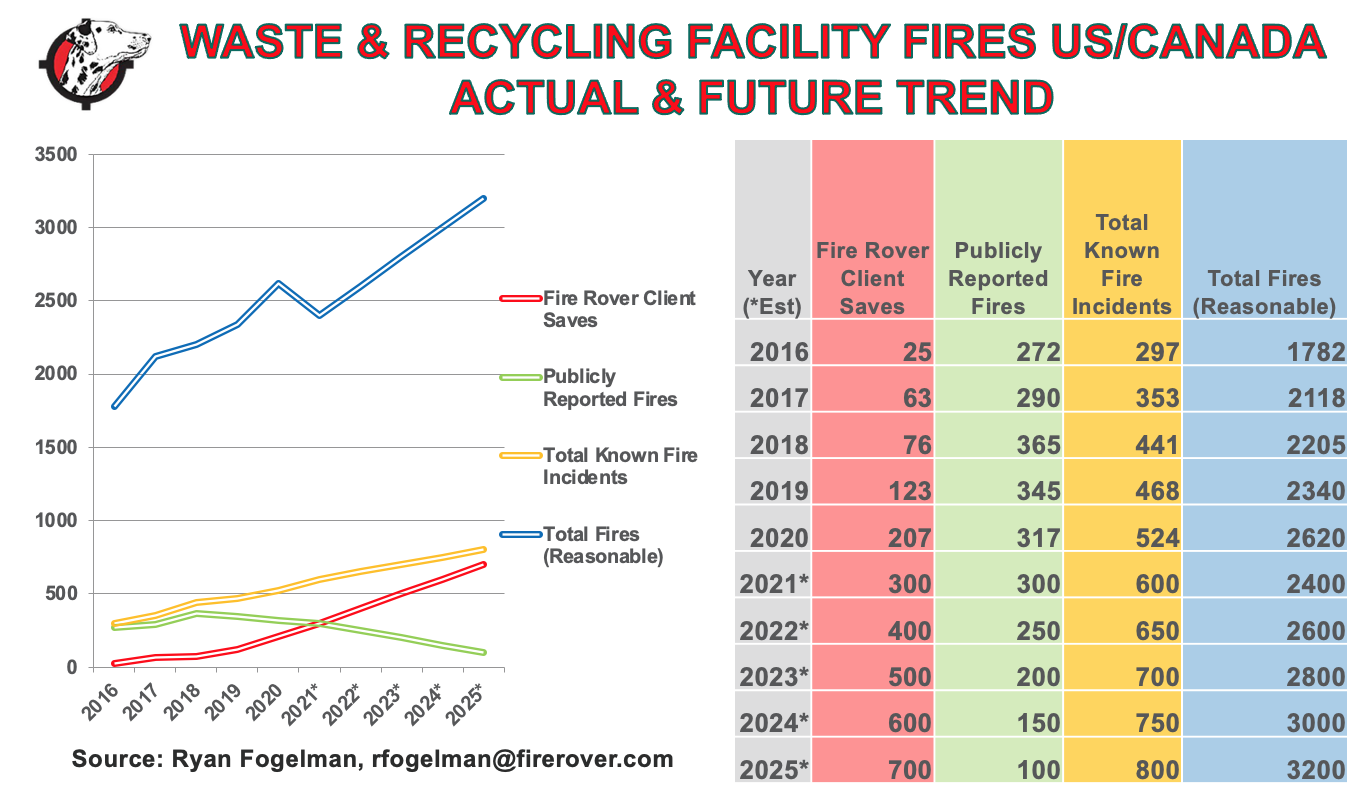 With these two data sources, we get a better picture of the risks to our industry and how we are performing.  The final column is based on total fires, using a reasonable multiple for known versus unknown (unreported) fires based on jurisdictions like the UK whose regulators requires full reporting, but making lowered assumptions in later years due to the increased visibility we gain with the additional data source.

In my opinion, our Industry’s goal is to continue to decrease the publicly reported fires and to increase the Fire Rover and/or other solutions’ client saves, which, even with the continued growth in hazards due to lithium-ion batteries and other hazards, will provide our industry with a very positive result. Most of the interested parties affected by catastrophic fire incidents, such as the public, insurance companies, fire professionals and more, only care about the losses that are not controlled, not losses that “could or might have” occurred.

There is definitely more to come as I continue down this path of consolidating and publishing this year’s Annual Fire Report. In 2020, we saw events like the pandemic change trends we have been experiencing for years, such as the summertime spike and holiday spike in fire incidents. I am excited to break down and share the data with you over the next few months.  Please feel free to reach out to me directly if you would like a PDF version of the annual report, which I hope to release by February. As we head toward a potential light at the end of the tunnel for the global pandemic, have a great 2021!

Ryan Fogelman, JD/MBA, is vice president of strategic partnerships for Fire Rover. He is focused on bringing innovative safety solutions to market, and two of his solutions have won the distinguished Edison Innovation Award for Industrial Safety and Consumer Products. He has been compiling and publishing the “Reported Waste & Recycling Facility Fires In The US/CAN” since February 2016 and the “Waste & Recycling Facility Fires Annual Report.” Fogelman speaks regularly on the topic of the scope of fire problems facing the waste and recycling industries, detection solutions, proper fire planning and early-stage fire risk mitigation.  Additionally, Fogelman is on the National Fire Protection Association’s Technical Committee for Hazard Materials. (See: https://www.linkedin.com/in/ryanjayfogelman/)