PaintCare has collected and processed more than 1,502,572 gallons of leftover architectural paint in Connecticut.

Since its launch in July 2013, PaintCare's paint stewardship program in Connecticut has continued to expand and find growing success. To date, PaintCare has collected and processed more than 1,502,572 gallons of leftover architectural paint in Connecticut. The program is also responsible for recycling 200 tons of metal and plastic containers in the state during the 2018 fiscal year.

The program is funded by a nominal fee on new paint sales: 35 cents for pints and quarts, 75 cents for 1-gallon cans and $1.60 for larger containers up to 5 gallons. This fee is responsible for funding paint collection, transportation, recycling, retailer training and promotion in Connecticut. Although all retailers must include the fee on their paint sales, participation as a drop-off site is optional.

A large part of this program's success in Connecticut has been due to the overwhelming support that PaintCare has received from participating retailers, paint professionals, state legislators, the Department of Energy & Environmental Protection and residents who are choosing to do their part.

"We are pleased with the success of this program in Connecticut," said Program Manager Laura Honis in a statement. "And we are grateful to our valued retail partners, as well as the Department of Energy & Environmental Protection for making this achievement possible."

Check out the following infographic highlighting the successes from the most recent reporting period for Connecticut’s program, or download the infographic here. 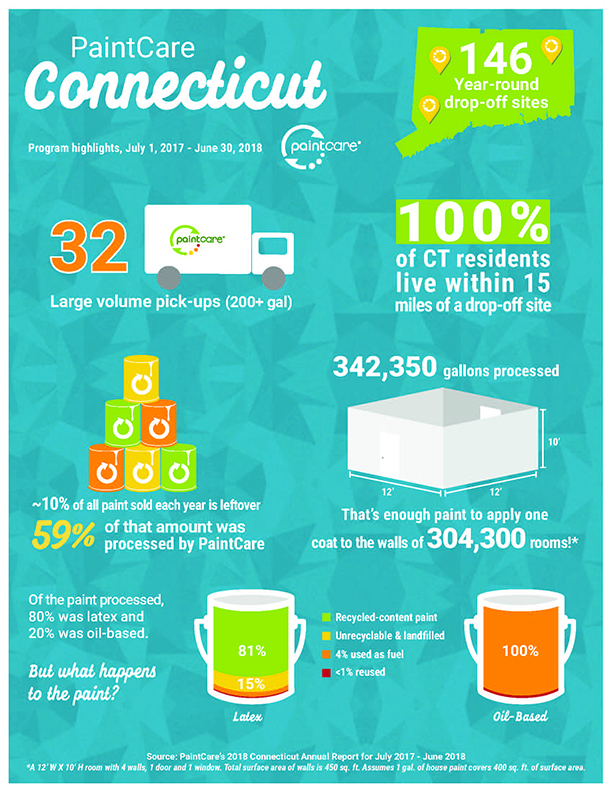