Cleveland, Ohio Anticipates Return of Curbside Recycling By End of 2021 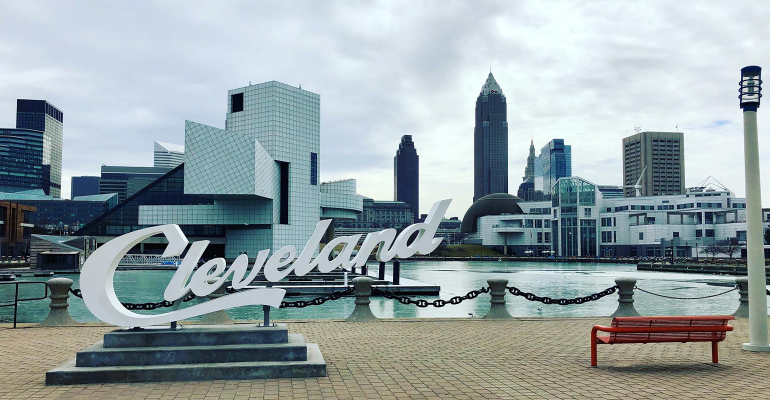 The city kicked off its annual, two-day Sustainable Cleveland Summit on Thursday, Oct. 20. In his opening address, Chief of Sustainability Jason Wood provided attendees with an update on key sustainability objectives.

"Cleveland is a community truly stepped forward to establish itself as a leader in the emerging effort to use climate action in a manner to meaningfully impact the quality of life of our residents, and the overall health and vitality of our environment, our neighborhoods and our economy," said Jason Wood, chief of sustainability.

Wood, who was sworn into his position at the beginning of January 2020, recapped the city's progress over the past 365 days. He noted that Cleveland saw "major activity" around waste management.

"Like many cities around the world, our recycling program was hit hard by changes in the global market," Wood explained. "In April of 2020, we temporarily suspended curbside recycling and since that point, the Office of Sustainability has been working with the Department of Public Works in the Division of Waste Collection, as they re-evaluate the entirety of the waste management process."

Following the expiration of the city's recycling contract in April 2020, Cleveland failed to attract a bid largely due to its 68 percent contamination rate. Columbus, Ohio-based consultants GT Environmental provided  a 269-page report, which included an extensive waste audit and recommendations about how the city should move forward.

The result was a bi-weekly opt-in curbside recycling program, with initial deployment expected at the end of 2021. Residents cited poor communication and distrust of the city to implement an efficient program as a reason to not participate.

In an follow-up announcement on Thursday, Oct. 21, the city extended its sign-up deadline to Thursday, Nov. 5 as opt-in requests almost doubled over the last two weeks to more than 17,000 households.

“The decision to extend the deadline helps ensure that everyone who wants to participate in the first round of the new recycling program has the opportunity to do so,” said Mayor Frank G. Jackson in a statement. “We are encouraged by the increase in requests and are committed to working alongside residents to establish a more efficient and sustainable waste and recycling collection process.”

As part of the sign-up process, residents are required to sign a pledge showing their commitment to the new curbside recycling requirements such as disposing of acceptable materials in correct containers and agreeing that the city may remove their bins of found not properly recycling according to the new guidelines, which have yet to be announced.

Households participating in the program have largely been concentrated on the west side of the city, demonstrating the socioeconomic divide. Illegal dumping is rampant on Cleveland's east side, where few have chosen to sign up.

The city plans to improve communication with its residents about program details including acceptable and non-acceptable materials with the addition of a new recycling coordinator: Orensel "Rum" Brumfield. Brumfield, who lives in the nearby suburb of Lakewood, Ohio, formerly was a waste management coordinator at MetroHealth and is a Cuyahoga County Master Recycler.

"His job is to provide the communication and education support that we know is so critical to the long-term success of this effort," Wood said. "We are currently evaluating the bids for sorting and processing contractor and remain on schedule to have this important program back up and running before the end of the year."

Wood noted the city's focus continued focus on sustainability, saying that "we are not going to recycle our way out of our waste management challenges."

To coincide with the new recycling program, the city launched Circular Cleveland initiative in November 2020, a 30-month process of developing and implementing circular economy strategies. The program was the result of a $476,000 grant from the Robert Wood Johnson Foundation. In conjunction with Cleveland Neighborhood Progress, Neighborhood Connections and the Ellen MacArthur Foundation, the two-phase project includes funding for a roadmap and development of a plan. Cleveland was one of six cities to receive the grant.

A portion of the funds, $60,000, will be used to launch a composting program at the city's historic West Side Market. Another $75,000 is reserved for neighborhood level community-led projects and $100,000 for small business loans.

"As we've been working in communicating with Robert Wood Johnson Foundation since receiving the grant, there are several things that they've said they really liked about our application," Wood said. "Among these was our intentional focus on equity and how we can align the environmental and economic benefits of what we're doing through the Circular Cleveland initiative to our vulnerable populations."

As part of the neighborhood-led grant program, ten Circular Cleveland ambassadors also were chosen to act as a liaison between the city and its residents for the completion and implementation of the sustainability roadmap.

"The roadmap will be completed in early 2022," Wood said. "We're on schedule to complete this project that we believe will make Cleveland more circular and more environmentally sustainable, allow us to shape healthier communities and neighborhoods, and perhaps most importantly, if we do it right, create the economic opportunity and wealth for residents that is so vitally needed."

This article was updated on October 22, 2021 to reflect the opt-in extension.