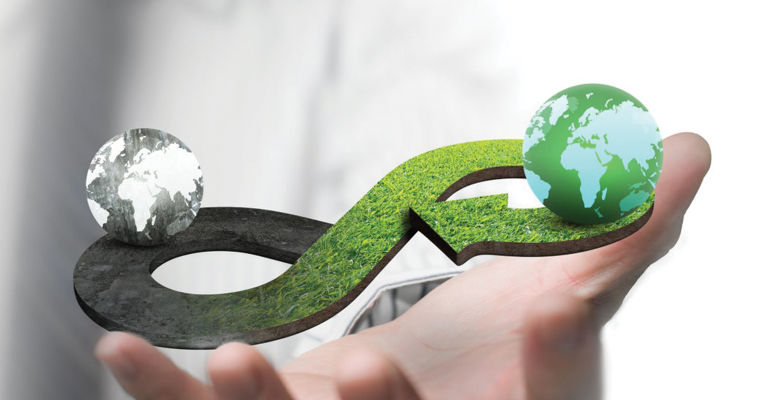 After China’s crackdown on plastic exports, Cascade Cart Solutions saw a spike in the already high volumes of these materials at domestic recycling facilities. This sparked the manufacturer and supplier of recycling containers to find ways to use more material in the U.S. and create pull through demand markets.

It’s strategy to be part of the fix is not only to use recycled content – but to put it into something that could capture even more recyclables.  It’s doing it with EcoCarts, curbside recycling containers made with old ground up carts, combined with curbside recycled material.

The company has actually worked for years with plastic processors and recyclers to recover and recycle its carts into new ones.  But the new piece is the addition of 10% postconsumer content from curbside collections. Combining these material types gets them up to 50% recycled plastic.

“A lot was going to China for years [that isn’t now]. We wanted to create a solution for what was recovered at curbside, especially bulky rigids. The idea was to create demand for hard-to-recycle materials,” says Brian Miller, regional sales manager Cascade Cart Solutions.

That “solution” fit with parent company Cascade Engineering’s triple bottom line philosophy: to be good for the environment, to be good for people, and to make a profit. And it’s one more vehicle to help reach two corporate goals: achieving zero waste-to-landfill and using alternatives to virgin materials. 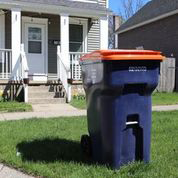 Nearly all parts produced at Cascade Engineering contain some recycled content, with the plan being to use 25% recycled material across its automotive, furniture, heavy truck lines, and other lines of business.

EcoCarts launched in 2020 with one large waste company and has taken off with help from that company – Waste Management – and three other partners: the Association of Plastic Recyclers, The Recycling Partnership, and KW Plastics.

“We put together a team and worked on what materials we could put into carts.  What started just over a year ago has grown faster than we could have imagined,” Miller says.

Waste Management initially adopted the EcoCart for roll carts, willing to begin with black containers until Cascade could match its color scheme.

The Recycling Partnership’s 2020 requirements for grant funding specify that carts must contain 5% postconsumer recycled content recovered in residential curbside programs, which has helped move the market. Both The Partnership and the Association of Plastic Recyclers helped with the specs and to make contacts.

KW Plastics worked on material formulation and processes the feedstock: high-density polyethylene (HDPE) that Cascade gets from municipalities and recycling programs throughout the country.

In 2020, the year the program launched, 250,000 pounds were processed to make only black carts. In December 2020 four more colors were released, and Cascade continued to expand its color portfolio as well as to increase content. It’s on track for 2.2 million pounds of curbside HDPE for 2021.

“We did a lot of testing and tweaking including in color development. The material is a battleship dark gray, which is hard to color mix for consistency. So, in the beginning all the new carts were black. Now they are produced in nine colors, which has worked well in haulers’ and municipalities’ branding,” Miller says.

There was rigorous molding testing followed by physical tests to ensure the product could be made and sold at a competitive cost to standard carts and that it could withstand harsh environments.

“With the move to automation, trucks are harder on carts, and we had to make sure it would live up to the ten-year warranty with no physical or aesthetic concessions,” he says.

The plastic is pulled out and baled at recycling centers and moves on to KW Plastics who cleans and shreds it and incorporates additives to make it consistent from box to box and gaylord to gaylord.

Then it’s on to Cascade to be molded and turned into carts.

“Taking material from carts and putting it through sorting, processing pellets, and molding to turn it into another cart that goes back on the curb is a perfect example of working to facilitate a circular economy,” Miller says, adding the goal is to go further.

The company aims to increase that 10 percent curbside recycled content and to expand its reach. Already EcoCarts have some presence in nearly all 50 states.

Holland, Mich. has gone with the bins for several reasons says Dan Broersma, sustainability manager City of Holland, Michigan: they are made from post-consumer curbside plastic (this was a qualifying metric); the quality, color, and size match its current stock; Cascade placed recycling information on the lid; the cost was right; and Cascade is a local company.

“The rollout went smoothly, with some planning ahead of time,” Broersma says.

The city started communicating to residents months in advance. The communication was done on many occasions between online and mailings. And the carts were delivered with the help of Cascade.

The city is especially excited that while the feedstock currently comes from a different location, Holland’s materials are about to go into these bins, says Broersma, who calls the program “a resounding success,” commenting the bins are holding up well so far, and residents like knowing they are made from recycled material.

The innovation earned recognition of the Institute of Scrap Recycling Industries (ISRI) who named Cascade Engineering as its 2021 Design for Recycling Award winner.

“They pull often hard-to-recycle plastic out of residential recycling programs for use in the EcoCart and can use a majority of the cart to make new ones. This demonstrates Cascade Engineering's dedication to circularity, as well as recycling and sustainability, in product design and manufacturing,” Wiener says.