Using the process of upcycling, Hipcycle has worked with a product partner to produce a number of uniquely designed bags and a barbecue apron from decommissioned Delta airline life vests. The bright yellow bags come in yoga (pictured), tote, pouch and messenger designs, some of which are creatively outfitted with red emergency inflate life jacket pulls.

Sterilization packaging manufacturer Beacon Converters commissioned Designer and Environmental Educator Nancy Judd of Recycle Runway to design Bella, a wedding gown made out of discarded, pure white Tyvek. Tyvek is a material commonly used in healthcare sterilization packaging, and it is capable of being recycled and recovered for repurposing. The dress also features hand-crafted flowers made of Tyvek packaging waste, which were created by various heathcare professionals.

Casella Organics has teamed up with a number of Portland communities to recycle biosolids for compost. At Casella’s Hawk Ridge Compost Facility, the recycled biosolids are mixed with a carbon source like wood chips, oxygen and water to create rich compost that can be used as a soil amendment or a direct medium for plant growth. Annually, Casella produces approximately 800,000 wheel barrows of organic compost, roughly 5 percent of which contains biosolids.

3D Hubs, an online 3D printing service platform that operates a network of 3D printers in more than 150 countries and provides over 1 billion people with access to 3D printers within 10 miles of their home, has partnered with Fairphone 2 to create a night stand and a speaker dock using a 3D printer. These two accessories, which are specifically designed for Fairphone 2’s phone design, are 3D printed in a composite of recycled wood fibers and the bio-degradable plastic PLA.

Nike is kicking up its sustainability efforts by creating more shoes from manufacturing waste. According to the company’s recent sustainability report, 70 percent of the company’s footwear contains materials made from ground-up shoes and scraps. Nike pledged to stop buying carbon offsets in 2010 and has since been working toward reducing its own emissions to eventually eliminate all waste products from its manufacturing process. The company is also selling its used materials to outside buyers for running tracks, playgrounds, gym floors and carpet underlay.

Seattle-based textile technology startup Evrnu has partnered with Levi Strauss & Co. to create Levi’s 511 jeans, a pilot pair of jeans made entirely of post-consumer cotton waste, which helps reduce both waste and water consumption. The pair of jeans was created from approximately five old cotton T-shirts, which were recycled, purified, broken down into a pulp and created into a new fiber that is finer than silk and stronger than cotton.

Elvis & Kresse was established in 2005 to save decommissioned fire hoses from fire brigades across the UK. Since then, the company has been creating bags (pictured), wallets, belts and more from the recycled fire hose material, which is designed to survive the harshest environments. Elvis & Kresse has rescued more than 200 tons of material to date, and the company is always on the hunt for new materials for its product selection. The company also donates 50 percent of its fire hose products to the Fire Fighters Charity.

In an effort to reduce food waste, N.Y.-based condiment company Sir Kensington’s has introduced a new vegan mayonnaise made with aquafaba, which is the liquid left behind from chickpea cans or cooking with legume. Fabanaise utilizes aquafaba as a natural egg substitute and comes in two flavors: classic and chipotle. To make this product, Sir Kensington’s has established a long-term partnership with Ithaca Hummus to ensure an ample supply of aquafaba.

Product manufacturer RAREFORM is giving billboard materials a new life by repurposing rescued billboards into bold and colorful bags, accessories, skateboards and more. To make its products, the company cuts the recycled 12-foot-by-28-foot adverts into a creative mix of elements and then sews various pieces together to create unique and one-of-a-kind product designs. RAREFORM has also partnered with 1% for the Planet to donate 1 percent of its sales to help restore and preserve the natural environment.

Dearborn, Mich.-based automaker Ford Motor Co. is working with N.Y.-based sustainable chemistry company Novomer to produce CO2-based foam and plastic required for its vehicles. Converge, the branded CO2-based polyols, could be featured in Ford’s vehicles within the next five years. According to Ford, these polyols could help reduce its annual petroleum consumption by 2 million barrels. This new development goes hand-in-hand with Ford’s other sustainability efforts, which include using upholstered fabric made of recycled plastic bottles for the seats in one of its pickup trucks and testing other upcycled and plant-based materials for window trim and other interiors. 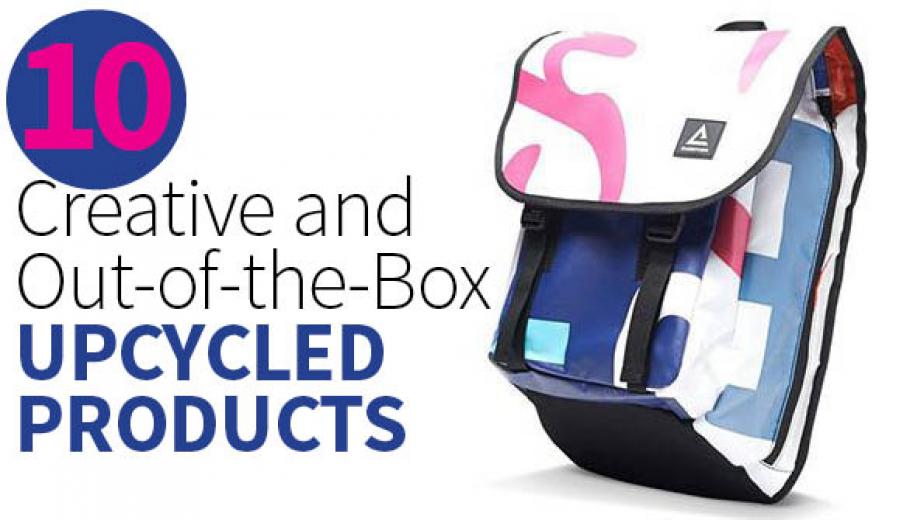