Through a pilot project powered by radio frequency identification (RFID) technology, Charleston County, S.C., has gained insight into the recycling habits of its residents &mdash; and into what the transition to single stream recycling will mean for its municipal recycling facility.

Walmart and other retailers have long relied on radio frequency identification (RFID) technology to improve product tracking while increasing efficiencies and productivity. Today, companies in the waste management industry are starting to see the benefits of employing the technology too.

In 2009, the Board of Commissioners of Charleston County, S.C., decided it would move from a dual-stream recycling collection system to single-stream. Doing so would require new carts, new collection trucks and would coincide with the $5 million retrofit of its municipal recycling facility (MRF), to accommodate the larger quantity that the county expects to collect through single-stream recycling.

But rather than merely copying other, similar municipalities that have migrated to single stream, Charleston County is using RFID to help it devise a reliable, data-based process for tracking the transition. The county contracted with solid waste management specialist Kessler Consulting to oversee the process.

Kessler brought Sonrai Systems, a technology provider to the waste management and retail industries, into the project, based on the company’s experience and expertise employing RFID in 45 different waste management applications in 18 states.

Along with its move to single-stream recycling, Charleston County decided to switch to automated collection trucks, which would reduce its labor needs and improve collection worker safety.

Kessler and Sonrai devised a pilot program using RFID to track the number of recycling carts placed at the curb for collection within the pilot area. The county would also use the technology to determine the optimal number of houses it should have on each of the new single stream routes in order to maximize efficiencies. (It is generally accepted that automated single-stream collection is much faster than dual stream, allowing each truck to cover a larger area.) This would also determine how many trucks the county needed to purchase.

In January 2011, Charleston County distributed wheeled collection carts, manufactured by Rehrig Pacific Co., to 5,000 of the county’s 110,000 residences. Embedded in each cart was an ISO 18000-6C/EPC Gen 2 tag made by Avery Dennison.

The pilot project team worked with the county and a group of geographic information system (GIS) professionals to build out a database that accurately associates the unique identification number encoded to each RFID tag with the address and corresponding account number for the residence to which the cart is assigned.

Pilot sites were carefully selected to measure the impact of single stream on a range of neighborhoods.

“The starting point was that we wanted a pilot neighborhood in each large municipality within the county, and we wanted to test [single-stream collection] in neighborhoods with a range of different demographics,” says Hal Crawford, Charleston County’s collection manager.

“We targeted neighborhoods with low participation in the dual stream, but also those with medium and high participation,” explains Crawford. The goal was to see how the transition to single stream would change the habits of county residents. The hope was that the ease of single-stream recycling would increase both the number of residents who recycle as well as the amount of material collected. 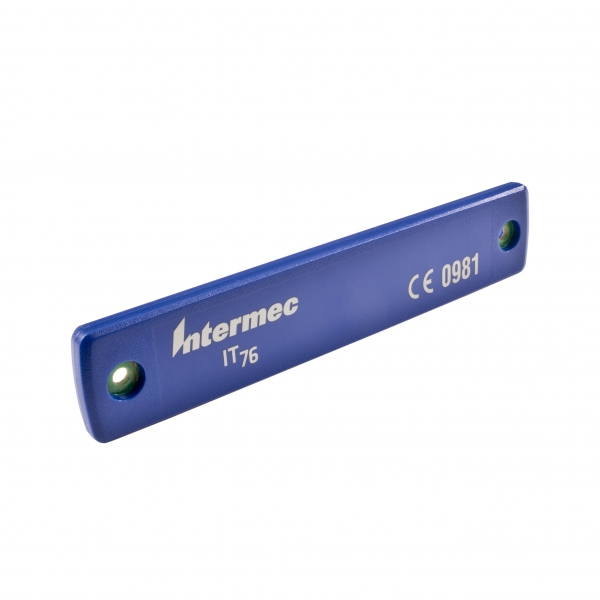 Two automated collection trucks were also part of the pilot: a side-loader with a Mack LE chassis and a Labrie Automizer body, and a Mack LE chassis front-loader with a Heil Half-Pack Eject body fitted with a Curotto-Can Slammin’ Eagle. Sonrai’s challenge was to integrate an RFID reader and antenna into each truck and configure it so that it would capture each tag ID accurately and quickly. To accomplish this, it configured the antenna to activate only once the automated arms clasped, lifted and emptied a cart into the trucks. This way, the antenna is less likely to collect the IDs of other tags that might be in the vicinity. Plus, the antenna is tuned so that it captures only the tags that are close to the arm, thereby avoiding collecting all the tags embedded in the carts around the truck.

“We did a lot of cable evaluations and development to come up with a specification that we would not get bleed-over from tags we didn’t want to read,” explains Tony Romano, vice president of business development for Sonrai Systems. He also notes that garbage trucks pose a much greater challenge to RFID hardware when compared to the types of vehicles it is generally mounted to, such as forklifts used inside warehouses.

These trucks are “the hottest, coldest, heaviest, smelliest, stickiest places in the whole wide world,” he says. “When we got into this [RFID] space we took on the responsibility of finding the most durable hardware set out there.”

Sonrai’s RFID partner Intermec provided the RFID hardware used in the pilot. The Intermec IV7 RFID reader is compliant with the ISO 18000-6C or EPC Gen 2 standard. The tags are passive, meaning they exploit energy from the reader antenna and transmit their ID numbers to the reader through a method called backscatter. Because they do not use a battery, these tags are low cost and have a very long life. 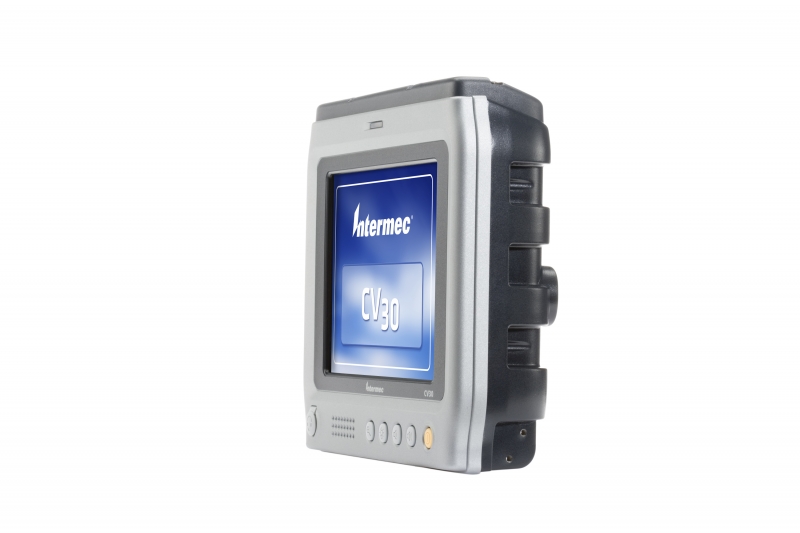 Inside each of the pilot trucks Sonrai installed an Intermec CV30 onboard computer, which receives tag data from the reader (via its antenna, mounted on the collection arm) and forwards it through a cellular link to the main collection center office.

Running on the CV30 is software that Sonrai devised to make the collection process clear and simple for drivers. When the drivers start their trucks, the Sonrai software checks that the reader and antenna are on and working before signaling the driver to begin the route. The software then gives the driver visual and auditory clues to affirm each action as he services the route.

A globe on the screen of the CV30 shines yellow when no tag is being read. Once the truck’s arm is engaged and a tag is read, it goes green and emits a tone to let the driver know that the tag was been read. Once these signals are issued and the cart is returned to the curb, the driver continues to the next cart.

If a tag is not properly read, the driver can reset the reader, which solves 99 percent of the reading problems, says Romano. If the issue needs to be escalated, the driver calls dispatch.

Additionally, the system enables the driver to communicate any issues with a particular household’s recycling. The software presents a number of prompts on the CV30’s touch screen, which the driver can use to note, for example, that the cart was placed backwards at the curb, or contained a large percentage of non-recyclable contaminants. The software then associates the issues with the cart ID and account information and forwards this data to the main database. Armed with this data, Crawford can reach out to repeat offenders and ask them to remedy the problem(s).

And because the software tracks each and every cart collection, the county has been able to keep accurate records of each household’s activity. The county used this information in an education campaign in which it sent thank-you postcards to consistent recyclers and educational postcards to recycling laggards. (It’s too early to know whether the campaign has resulted in an uptick in recycling.)

Based on the results of the first seven months of the pilot, the county decided to expand the system to another 6,000 homes, which it rolled out in early October. It will then roll the single-stream system out to the rest of its 110,000 single-family homes, as well as commercial customers, over the next 12-18 months.

The county has already reaped value from the RFID system in a number of specific ways. For one, it has been able to measure the level of participation within the pilot zones. “One route that had a low participation level of 19 percent [with dual stream] is now at 57.8 percent,” says Crawford. “And the baseline tonnage of recycling collected there doubled and has stayed that way.”

Participation levels at pilot sites started at 35 percent and grew to 70 percent. And that increase, of course, means far more material for recycling. “We knew we’d get more with single stream but we didn’t know by how much,” says Don Ross, Kessler Consulting’s senior consultant.

During the pilot, the county has been collecting an average of 28.8 pounds of material per cart (gleaned by weighing the full trucks at the end of each route), a 117 percent increase in pounds compared to dual-stream collection. 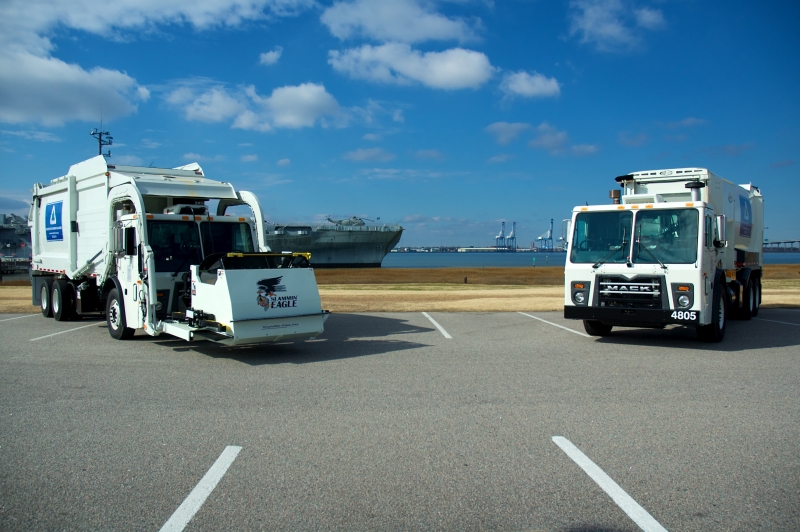 This data, along with insight into how many of the pilot households are recycling, and how often, will help Charleston County accurately estimate how much material it can expect to receive at its new MRF.

“I’m so excited about this program,” says Teddie Pryor, Charleston County Board of Commissioners Chairman. Before starting the pilot, “we went down to Florida and North Carolina and looked at what they were doing and we thought: ‘we could do it and do it even better.’ The residents are excited and they are calling us from all over the county, asking when they’re going to get their carts.”

That excitement extends to Hal Crawford, who says the Sonrai system makes it easy for him to track activity on the street without leaving his desk. “The collection data is downloaded automatically, in real time. If a pilot truck is out and it’s 12:30 and I am sitting here at lunch, I can log onto the cart management software and I can see he’s collected 130 carts. I know he has 300 carts to go and I know roughly how long that’s going to take. I can almost set my clock to when a driver is going to finish. I have a complete faith in that data.”

As part of the full rollout, Sonrai says it will outfit supervisor and manager vehicles with laptops so they can have access to the data as well.

The RFID data also helped the county determine which collection vehicles it should purchase. The Curotto Can-equipped front loader hauled a greater payload than the side loader, which reduced trips to the MRF. This was an especially important consideration in the sizable Charleston County, with considerable distances between routes and the MRF. The county will be purchasing front-loaders going forward.

“If you don’t measure it you can’t manage it,” says Ross, in describing the value of adding RFID to waste collection. Plus, the general rules of thumb regarding how to distribute trucks and size routes in a single stream system did not, it turns out, match Charleston’s reality.

The size of each route used to correlate only to how many houses you passed, says Romano, not how many homes a driver could be expected to collect. With the RFID system in place, Charleston County found that with a route of 1,000 homes, the actual number of pick-ups was as low as 700. “So 1,000 houses is really 1,200, or may be pushing on 1,400, based on what actually happens.”

By relying on what the RFID system was actually seeing rather than what convention says the size of a route should be, the county can purchase fewer trucks and expect greater efficiencies from its collectors. And given that the county is spending up to $13 million on the total single stream system and new MRF, efficiencies are vital.

Ross sums up the reason Charleston decided to closely measure its single stream transition, and why what works for other communities wouldn’t necessarily work there. “All solid waste is local,” he says.

Mary Catherine O’Connor is a freelance journalist based in San Francisco.