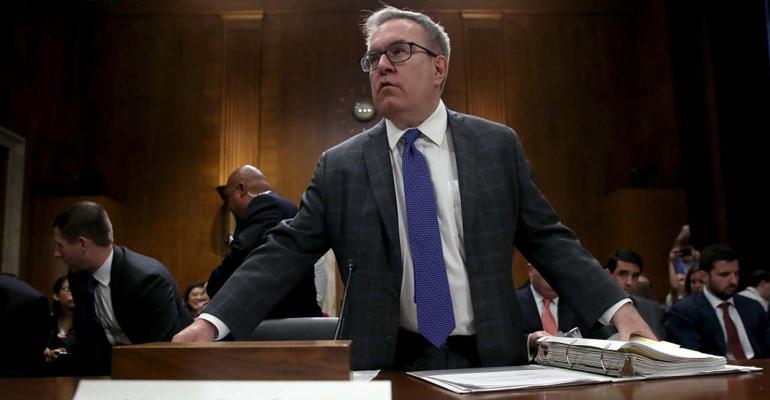 Acting EPA Administrator Andrew Wheeler arrives for testimony before the Senate Environment and Public Works Committee Aug. 1, 2018.
If the Senate confirms Wheeler’s appointment, his responsibilities wouldn’t change. Without the confirmation, however, he may have been limited to 210 days as acting chief.

President Donald Trump has officially nominated Andrew Wheeler to be the permanent administrator of the U.S. Environmental Protection Agency (EPA).

Wheeler, a former coal lobbyist, has been serving as acting administrator since former EPA Administrator Scott Pruitt resigned in July 2018 amid federal ethics inquiries. Trump announced in November that he intended to nominate Wheeler to be the agency’s permanent administrator.

According to a report in The Hill, if the Senate confirms Wheeler to head the EPA, his responsibilities and abilities wouldn’t change. But without the confirmation, he may have been limited to 210 days as acting chief, the report notes.

The Hill has more details:

President Trump has formally nominated Andrew Wheeler, a former coal lobbyist who has led the Environmental Protection Agency (EPA) in an acting capacity for six months, to serve as EPA administrator.

The White House said Wednesday that Trump had sent Wheeler’s nomination to the Senate, making good on a promise he made in November.

“I am honored and grateful that President Trump has nominated me to lead the Environmental Protection Agency,” Wheeler said in a statement.

“For me, there is no greater responsibility than protecting human health and the environment, and I look forward to carrying out this essential task on behalf of the American public.”