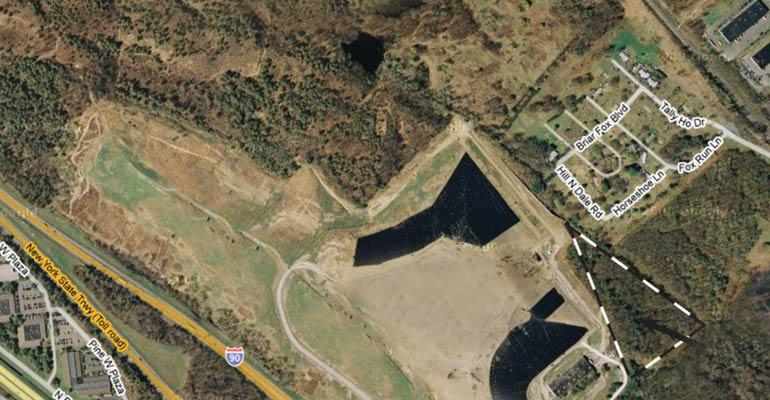 The landfill should reach capacity by 2023, leading city officials to explore other disposal options.

The city of Albany, N.Y.’s, Rapp Road Landfill is nearing maximum capacity. Over the years, horizontal and vertical expansions have prolonged its useful life, but by January 1, 2023, the city estimates the landfill will no longer be able to accept waste.

As officials anticipate that impending five-year deadline and the looming $20 million closure project necessary when capacity is reached, they’re exploring solutions to ensure a smooth transition for Albany residents.

Joseph Giebelhaus, superintendent of Sanitation Services with the Department of General Services of Albany, says residents currently pay nothing for the city’s trash and recycling collections or for disposal at the landfill. But, like the landfill itself, that practice is likely coming to an end.

“We’re going to discuss the problem—the landfill is closing at a given date,” says Giebelhaus. “That’s going to have fiscal impacts on the city resident. We close in 2023. We have a $20 million closure project that we have to do. We are expecting to have to pay about $3 million per year for transportation and disposal of waste. So that’s kind of a big hitch to the taxpayer in the course of one year. So we’re going to have to come up with some plans.”

The City of Albany serves as the head of the planning unit for the 10 municipalities that make up Capital District Solid Waste Management Partnership.

The Albany-owned landfill is permitted for 1,050 tons per day of MSW, C&D and sludge, with a limit of 262 tons per day of contaminated soil. The city slowly has backed away from the commercial market, he says, to save on capacity.

This month, the city put out a draft Request for Proposal (RFP) for a transfer station.

According to the preliminary RFP, “The City is interested in phasing in operation of a Transfer Station beginning no later than December 2020. The new Transfer Station is proposed to be located on and adjacent to the current Rapp Road Landfill property (Rapp Road Site). The City proposes to enter into a Contract with the Respondent that offers the most attractive Transfer Station proposal that benefits the City.”

Additionally, the RFP states that the selection process will take into consideration factors such as cost to the city, opportunities for waste reduction and diversion, recycling enhancements, local economic benefits, value of jobs created, financial capabilities, sustainability and long-term commitment to the community. In addition to traditional waste transfer, the facility will be used to host a variety of waste collection activities including accommodations for residentially generated household hazardous wastes, electronic wastes, and bulky waste materials.

Although the RFP specifically mentions transfer station, Giebelhaus says the city has made the RFP as broad based as possible and is willing to look at any and all options from transfer station to incinerator to address solid waste.

“There’s nothing that is being specifically endorsed by anyone in the administration or even myself as which tool to use to achieve the goals,” he says. “We just know that we have tools that we can implement to try to start moving in a direction that will increase recycling rates and decrease the amount of waste.”

So the city is fairly open about the technology and about the business arrangements, he says.

As the community has 60 days to comment on the RFP, the city is taking the opportunity to talk trash with its residents.

Giebelhaus and three team members are addressing community members at upcoming public meetings to explain the closing of the landfill and its costs, the preliminary RFP, a successful pilot automated recycling program and the possible pay-as-you-throw program as well as other, “tools in the toolbox,” he says, that could be used to mitigate the impact of these new expenses.

The city of Albany, established in the early 1630’s, is in an unusual situation, he says, because it still owns its own landfill and collections fleet.

A PAYT program is one of those “tools” for getting where the city needs to be. A provisional PAYT program, based on residential units, not volume, currently is in place. So basically the city’s collections program is limited to four units per stop, so each unit is accessed a fee of $180 per year with the exception of the first unit.

Along with PAYT, Giebelhaus will discuss other solid waste initiatives, including the RFP and how a partnership might look.

The city didn’t begin formal trash pickup until 1974, and even then, it was simply divided up into geographic portions for collection, and that, effectively, was the end of collections planning, he says. A few tweaks to balance routes, but even today the city may be running five to seven collections routes for sanitation and three to five for recycling.

In addition to PAYT, another initiative was a pilot recycling project using 22-gallon hand held totes. The plan is to move to a 64-gallon wheeled cart.

“We did a pilot program on that, which has been quite successful in increasing recycling rates in the target areas and now we want to expand that out to every possible household that can store and manipulate a 64-gallon wheeled cart. So we’re trying to maximize our recycling at the curb,” he says.

With that change, Albany developed its first automated route for those carts, and is checking the feasibility of expanding automated and semi-automated collections throughout the city for any area that can accommodate the larger carts.

“It’s going to be complicated because we’re going to have to utilize all three modes—manual, automated and semi-automated—throughout the city to make it work because of the way the city is setup.”

The meetings will give the community the chance to learn about the city’s waste program, the closing landfill, and all the initiatives the city has planned, as well as the RFP for the future. They’ll have the chance to communicate their ideas and even get to vote on their preference for cart size.