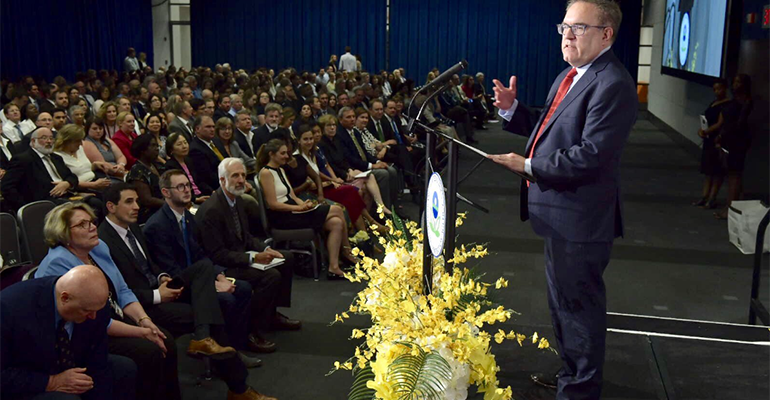 The Diamond Alkali/Passaic site in Newark, N.J., was removed from the list, and three more sites were added.

“With this update, EPA achieves an important milestone at the Diamond Alkali site and also adds three additional sites to the Administrator’s Emphasis List for immediate attention and action,” said EPA Administrator Andrew Wheeler in a statement. “These updates demonstrate our continued progress in the Superfund program and our commitment to accelerate the cleanup of the nation’s most contaminated sites. In Fiscal Year 2018, EPA deleted more sites off Superfund’s National Priorities List than any other single year since 2005, and we’re on pace to delete even more this year.”

“Placing Arsenic Mine on the Administrator’s Emphasis List underscores EPA’s commitment to investigate this site and find the appropriate avenue for addressing it. We are pursuing inclusion on the National Priorities List to provide a strong framework for protecting public health and the environment at the site,” said EPA Regional Administrator Pete Lopez in a statement. “Removing the Diamond Alkali site from the list after completing the important remedial investigation work is further evidence of the strides we are making to advance projects in the Superfund program.”

Removing the Diamond Alkali/Passaic Superfund site from the Administrator’s Emphasis List reflects another significant achievement under the Superfund Task Force. The site was placed on the list with the goal of finalizing the remedial investigation. EPA approved the remedial investigation on June 28, advancing the process forward toward developing a feasibility study to evaluate potential interim cleanup actions. These actions will address contamination that has impacted the quality of the Passaic River and the community’s ability to use the river.

On June 3, EPA proposed the Arsenic Mine site to the National Priorities List after the Agency for Toxic Substances and Disease Registry issued a public health advisory. EPA will consider public comments on the proposal to list the site and make a final determination by the end of calendar year 2019.

At the San Mateo Creek Basin Legacy Uranium Mines site, EPA will obtain responsible party commitments to perform the equivalent of a remedial investigation/feasibility study assessment of the San Mateo Basin. Reaching this milestone will move the site closer to the selection of a cleanup remedy.