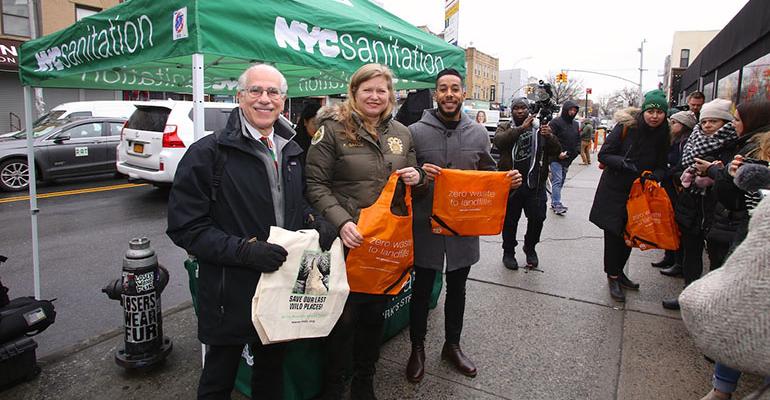 In advance of the New York State plastic carryout bag ban set to take effect on March 1, the City of New York Department of Sanitation (DSNY) has announced that it will be distributing some 100,000 free reusable bags to city residents over the next three weeks. Starting March 1, single-use plastic bags are banned, with limited exceptions, in New York State. In addition, businesses will begin collecting a 5-cent fee on paper carryout bags in New York City. Shoppers who bring a reusable bag will not be charged.

“City residents use billions of single-use carryout bags every year, and they are frequently used for only a few minutes at a time,” said Sanitation Commissioner Kathryn Garcia in a statement. “Plastic bags are particularly troublesome as contaminants in our recycling, as they often clog machinery, and we’ve all seen plastic bags stuck in city trees around the city. This is not sustainable. Bring your reusable bag every time you shop, and help us keep the city healthy, safe and clean.”

“I’m very excited to see New York’s plastic bag ban go into effect this March,” said City Council Member Antonio Reynoso in a statement. “A ban on plastic bags is exactly the type of direct action that we need to mount a formidable fight against climate change. Thanks to the ban, New Yorkers will be incentivized to adopt more sustainable habits, resulting in less pollution and heightened awareness about the climate crisis. I am committed to supporting the Department of Sanitation's efforts to help New Yorkers make the transition by distributing reusable bags to constituents in my own district.” 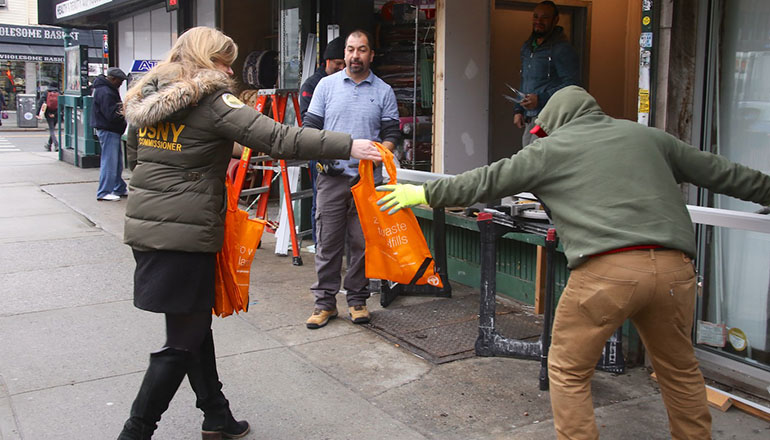 To help get city residents prepare for the change, DSNY has already distributed more than 700,000 reusable bags since 2016. The bags have been made available at events, through elected officials and community boards, from community groups and to residents taking the Zero Waste Pledge, among other venues.