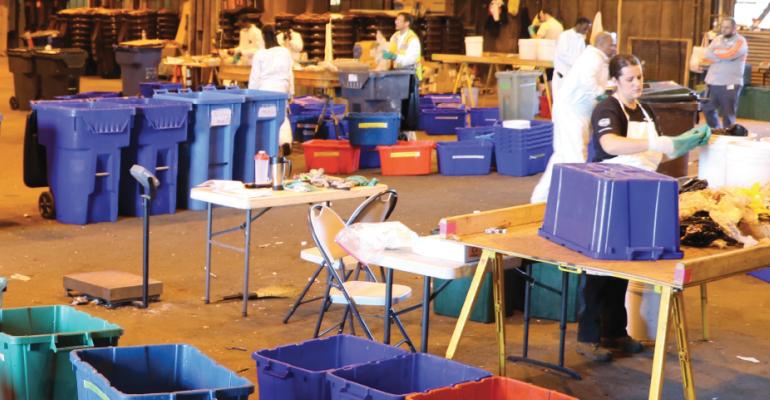 The study highlights what New Yorkers put in their trash, recycling and organics bins.

The City of New York Department of Sanitation (DSNY), in partnership with Sims Municipal Recycling, has released its fourth waste characterization study titled “2017 NYC Residential, School, and NYCHA Waste Characterization Study,” which provides an overview of what New Yorkers put in their trash, recycling and organics bins.

The study, which was executed by Mid-Atlantic Solid Waste Consultants, includes data on each segment of the waste stream and context behind the observed changes. It also features data on residential curbside collections as well as information on collections from both New York City public schools and New York City Housing Authority (NYCHA) buildings, creating a baseline citywide view of waste generation.

“The study is first and foremost a reflection of what we buy and choose to get rid of. It shows how consumer activity has changed through the years, and, hopefully, makes us think about the impact of our purchasing decisions,” said DSNY Commissioner Kathryn Garcia in a statement. “More specifically, this study tells us that our efforts to reduce, reuse and recycle our waste are working. The average New York City household throws away less and recycles more today than five years ago. The study also shows us that we have incredible opportunities to develop and grow programs to achieve even more. Together, we are working toward our goal of sending zero waste to landfills by 2030.”

DSNY conducted the study over spring, summer and fall of 2017, and the consulting team assessed 810 samples with 70 main sort categories and an additional 172 sub-categories. The study fulfills DSNY’s requirements under Local Law 40 of 2010 and builds on decades of research and analysis, providing a detailed look at the evolving composition of the waste stream.

Below is a brief overview of the study.

On a per household basis, the average New York City household in 2017 discarded less than 1,990 pounds per year of aggregate discards, which is down from 2,000 pounds in 2013 and about 2,280 pounds per year in 2005. This decline is mostly due to a reduction in refuse and a rebound in paper and MGP. But even though the total of aggregate discards has decreased, not all types of waste have declined. For example, households generated more non-bottle rigid plastic waste, food scraps and food-soiled paper suitable for composting than in years prior and the quantity of harmful household products and textiles increased. The study includes data from DSNY’s organics collection program as well, which was rolling out while the study was being conducted. At the time, majority of organic materials targeted in the program were still being discarded in refuse. In fact, the total pounds per household was more than 650. Since the program was piloted in 2013, it has expanded throughout the Bronx, Queens, Brooklyn and Staten Island. And as of the end of 2017, more than 3.3 million New Yorkers have access to the program.

The study sampled and characterized collections from districts where curbside organics had launched to establish a baseline composition of source separated organics. The study reveals that 59.9 of organic waste was yard trimmings, 31.0 percent was food scraps, 7.1 percent was other and 2.0 percent was compostable paper. It also shows that contamination rates in organics collection were low, averaging about 7 percent. DSNY currently collects waste, recyclables and organics from more than 1,800 public schools in New York City, which have the potential to divert as much as 86 percent of their waste for recycling or composting through DSNY curbside collection. Since recycling was mandated in New York City in 1989, DSNY has worked with the Department of Education (DOE) to improve recycling compliance. In 2015, for example, the duo partnered with GrowNYC’s Recycling Champions Program to launch Zero Waste Schools, which aims to divert all recyclable and compostable waste from approximately 100 Zero Waste Schools in five years and to apply the best practices learned from these schools citywide. DSNY currently collects waste from all NYCHA properties, which range from small, standalone buildings to large, multi-building complexes. For much of the last three decades, the residents of many NYCHA developments have had limited access to convenient and consistent recycling programs. But in 2015, NYCHA began providing all NYCHA residents with access to recycling services via its NYCHA Recycles! program, and today, DSNY and NYCHA are working together to offer staff and resident trainings and outreach to grow program participation.

From July 2016 to June 2017, DSNY collected more than 142,000 tons of refuse from NYCHA containers on dedicated routes. Of that total, approximately 33 percent is recyclable, 32 percent is organics suitable for composting, 23 percent is other materials and 12 percent is other divertable materials. The primary difference between the NYCHA waste and the non-NYCHA waste is the relative share of yard waste, which is 2.4 percent of total waste.