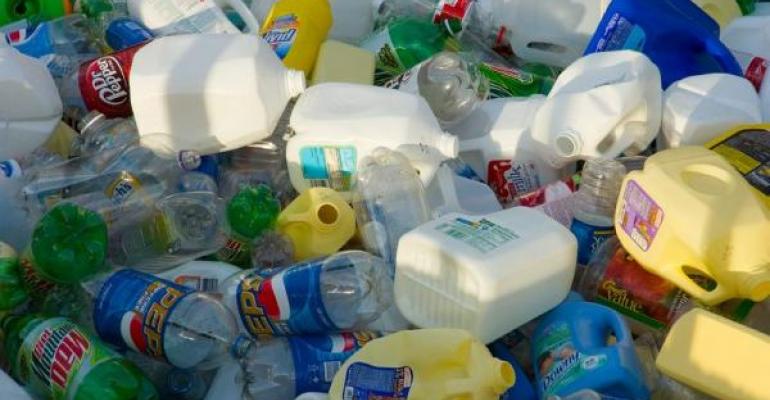 Beginning April 1, 2022, consumer packaged goods companies (CPGs) in the UK will pay a tax on the production and import of plastics for packaging at 200 pounds per ton ($263.76 per ton), if it’s made from less than 30% recycled material. The government’s intention is to provide an economic incentive for businesses to use more recycled plastics in a country that lags behind many of its European neighbors.

Beginning April 1, 2022, consumer packaged goods companies (CPGs) in the UK will pay a tax on the production and import of plastics for packaging at 200 pounds per ton ($263.76 per ton), if it’s made from less than 30% recycled material.

The government’s intention is to provide an economic incentive for businesses to use more recycled plastics in a country that lags behind many of its European neighbors.

UK has not made clear exactly how the money will be used, but the hope is it will be invested in collection, separation/processing, and identification of recyclable plastic, and educating consumers on how to recycle, says Amanda Stokes, business development director, HLP Klearfold in UK, a Hong-Kong based, global manufacturer of plastic packaging.

“By introducing a tax, I think the government is trying to stimulate recycling and reduce use of virgin plastics. It’s working to encourage manufacturers, brands, and retailers to use more environmentally friendly materials. But there has also been a large focus on encouraging consumers to be more selective in the products they buy in terms of packaging used. And to encourage consumers to properly discard it so it’s collected and reused,” notes Stokes’s counterpart, Tim Caven, sales and marketing director for HLP Klearfold.

What’s been lacking is a way to get consumers to recycle properly as well as sufficient local councils to collect and use post-consumer materials. Stakeholders are waiting to see if this policy will spur such actions.

The tax follows the phase-out of bottle deposit programs in the UK, whereby bottles were washed and refilled, though mainly for nonplastics. Even if such programs were brought back, implemented specifically for plastics, Caven questions how effective they’d be.

They’ve been tried mainly for glass but many consumers did not buy into the model. Nor have other refillable programs such as for liquid laundry detergent or spray bottles for shampoos and other products significantly driven plastic packaging reduction.

“It’s someone having to go out and physically refill it. And sometimes you have to take the label off before putting the packaging into the recycling [stream],” Stokes says. “Consumers want to make a conscious effort to be greener but sometimes life gets in the way. So, I think these incentives have not had results in terms of increasing recycling. Hence the government is resorting to this tax.”

The initial reaction among brand owners and companies has been to think about how they can adapt their packaging to avoid paying the tax.

“I think that’s a good thing because it means they are consciously considering using less damaging and less wasteful material or a combination of materials. So, from that point I think it could be successful. And if the government invests funds to get consumers to recycle properly and local councils to collect and use post-consumer waste as they should be – to put back into product – that too could prove [the tax] successful,” Caven says.

How will producers prove they meet the threshold of 30% recycled content? They can seek third-party certification from SCS, a global accreditation organization.

There’s the question of if there is enough captured and recycled content accessible for every company to meet the 30% reduction requirement. For now, HLP, who uses up to 100% recycled PET, has sufficient supply.

But to meet what will be increasing demand, infrastructure needs to expand and improve, and the hope is that the new tax will drive this improvement, with more collectors and processors coming online.

CPGs want to know if packaging from 30% recycled content is of the same quality as that from 100% virgin plastic.

Visually HLP’s customers can’t tell the difference, Caven says, though the company works only with PET.

From a performance stand, which is about impact strength, as material is recycled it is compromised. But it would have to be recycled seven or eight times to note a performance difference, though Caven can only speak to the PET they work with.

As far as cost, while recycling comes with a premium, investing in packaging containing at least 30% recycled plastic, will save producers in the long run, he says.

There are similar policies in other regions. The EU has a new plastic packaging levy, with some members states planning to cover resulting costs incurred with a tax. Spain and Italy planned to implement a plastic tax in 2021 but have postponed until the summer of 2022 and January 2023, respectively. The European Commission states on its website “This is expected to encourage member states to reduce packaging waste and stimulate Europe’s transition towards a circular economy by implementing the European Plastics Strategy.”

In North America, Congressman Tom Suozzi (D-Long Island, Queens) introduced a bill in the House in 2021 that would require manufacturers, producers, and importers to pay a fee on virgin plastics incorporated in single-use products, though as proposed the bill would allow rebates for some non-single-use plastics.

Meanwhile, the UK forges ahead with its approved policy.

As the marketing lead for a plastics packaging manufacturer Caven says, “The aims of the tax are honorable—promoting use of more environmentally friendly material and reducing the amount used and wasted."

For it to work, he says, it has to make good business and good environmental sense, noting that from a cost perspective, while investing in 30% recycled content may initially carry a premium, companies will save in the long run.

“Whether it’s necessary to create the atmosphere [resulting from an enforced tax] for the commercial world [outside of the UK] to follow is another matter," Caven says. "But in the UK that is what it is.”