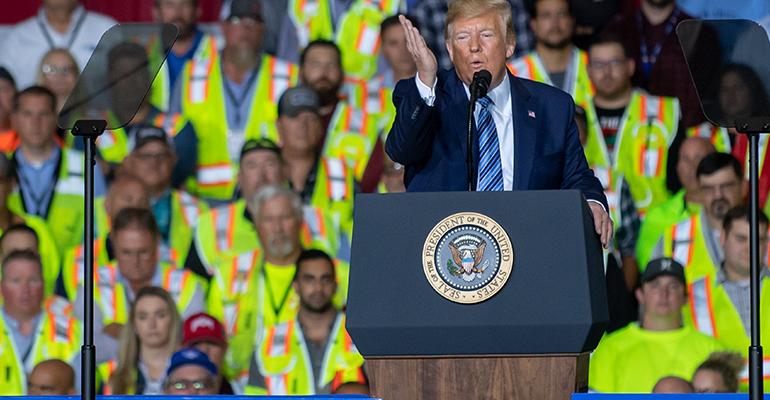 Critics claim the Pennsylvania Petrochemicals Complex will be the largest air polluter in the area.

President Donald Trump made a trip to western Pennsylvania earlier this week to promote a project that would turn gas into plastic products.

Trump visited Shell’s Pennsylvania Petrochemicals Complex, which critics claim will be the largest air polluter in the area. The company was given massive tax breaks to build the petrochemicals complex, along with a $10 million site development grant.

Trying to hold support in the manufacturing towns that helped him win the White House in 2016, President Donald Trump is showcasing growing efforts to capitalize on western Pennsylvania’s natural gas deposits by turning gas into plastics.

Trump will be in Monaca, about 40 minutes north of Pittsburgh, on Tuesday to tour Shell’s soon-to-be completed Pennsylvania Petrochemicals Complex. The facility, which critics claim will become the largest air polluter in western Pennsylvania, is being built in an area hungry for investment.

The focus is part of a continued push by the Trump administration to increase the economy’s dependence on fossil fuels in defiance of increasingly urgent warnings about climate change. And it’s an embrace of plastic at a time when the world is sounding alarms over its ubiquity and impact.