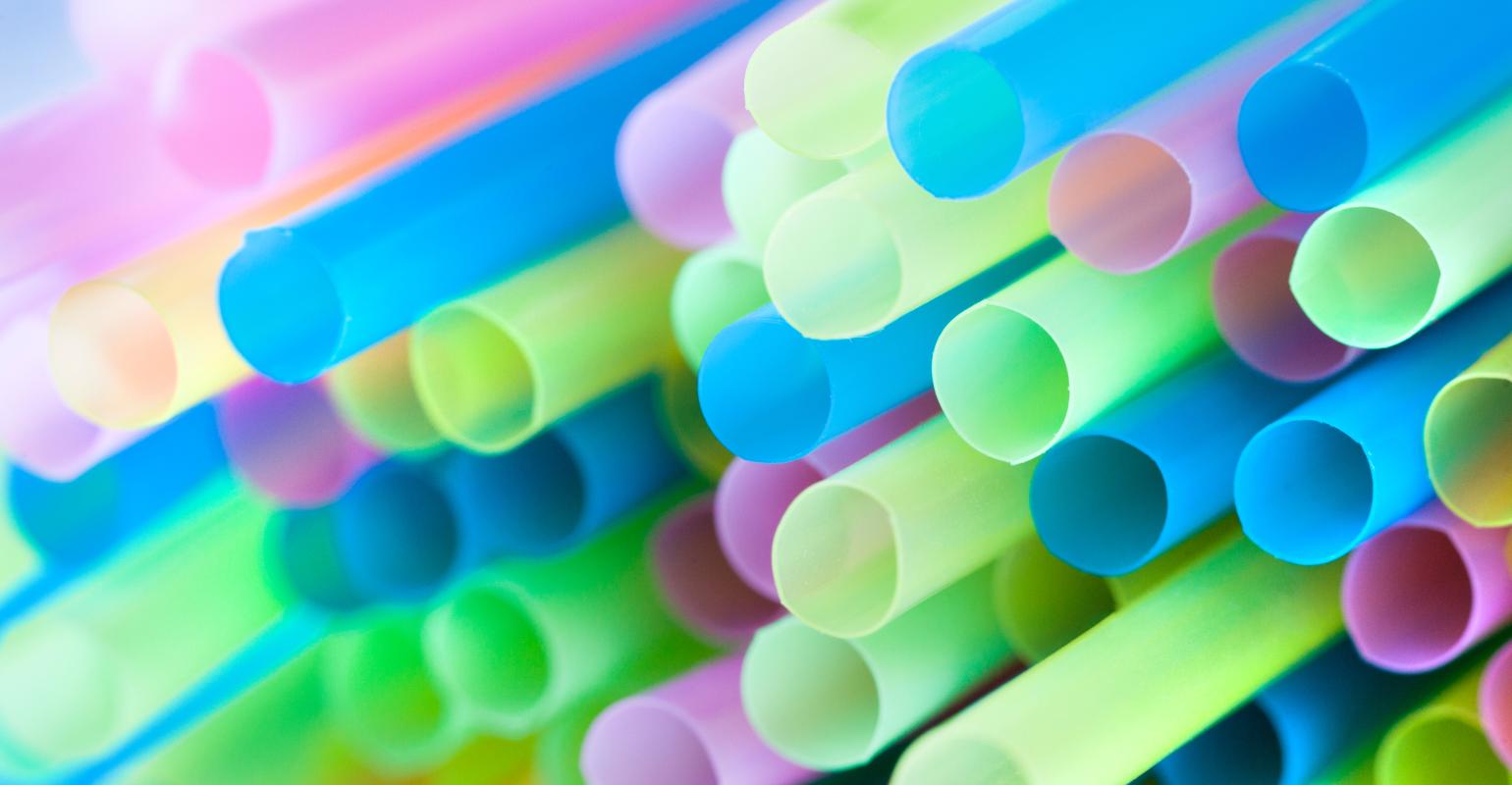 A recent study looks at how a “plastic straw upon request only” ordinance in California drastically decreased consumer usage of single-use straws.

Talk of the plastics pollution crisis is continuing to gain momentum across various domestic and global markets as coastal communities are seeing the damaging effects of plastic waste in full force.

Much like other coastal communities around the country, plastic litter is a significant problem in San Luis Obispo, Calif. During a 2017 Coastal Cleanup Day in the city, 1,363 plastic straws/stirrers were collected, making them the 10th most collected item that day. Additionally, single-use straws and stirrers had been among the top items collected over previous annual coastal cleanup days.

Those statistics come from a study titled “Assessing the Use of Default Choice Modification to Reduce Consumption of Plastic Straws,” which is co-authored by Travis Wagner, a professor for the Department of Environmental Science & Policy at the University of Southern Maine. The focus of the study is based on a “plastic straw upon request only” ordinance in San Luis Obispo. The ordinance was passed in November 2017 and went into effect on March 1, 2018. 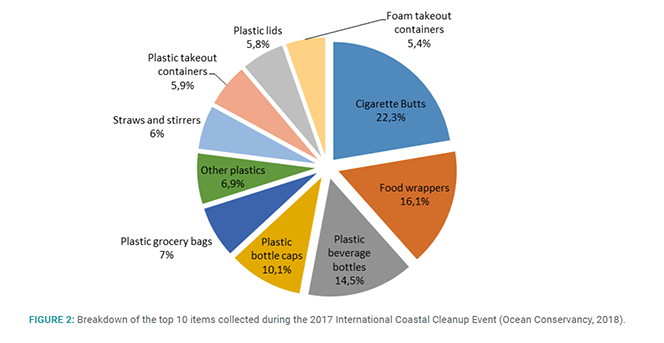 “As a global society, we are really rethinking single-use plastics, in part because of marine debris and National Sword,” explains Wagner. “It’s sending all these signals that something is going on, and we have to think about that. Because of minimal national and state action, municipality is taking up that mantel.”

The San Luis Obispo ordinance specifies that restaurants could no longer automatically hand out plastic straws to dine-in customers; straws may be provided, but only upon request. The ordinance does not apply to customers who purchase food to go or from food trucks, and self-serve straw dispensers were not prohibited.

To assess the impact of the plastic straw ordinance, Wagner and his team developed a nine-question survey that was hand-delivered to all 161 restaurants covered by the ordinance. The study was written based on 133 affected businesses that responded to the survey. Under the ordinance, the reported average decrease in straw consumption was 32 percent, and for restaurants not using a self-service straw dispenser, the average decrease was 41 percent.

Since the ordinance went into effect, 9.8 percent of respondents no longer offer a self-service option for straws and have removed their self-serve dispensers. Most respondents reported no impact to their business, some indicated a small decrease in costs and others reported some negative feedback from customers. 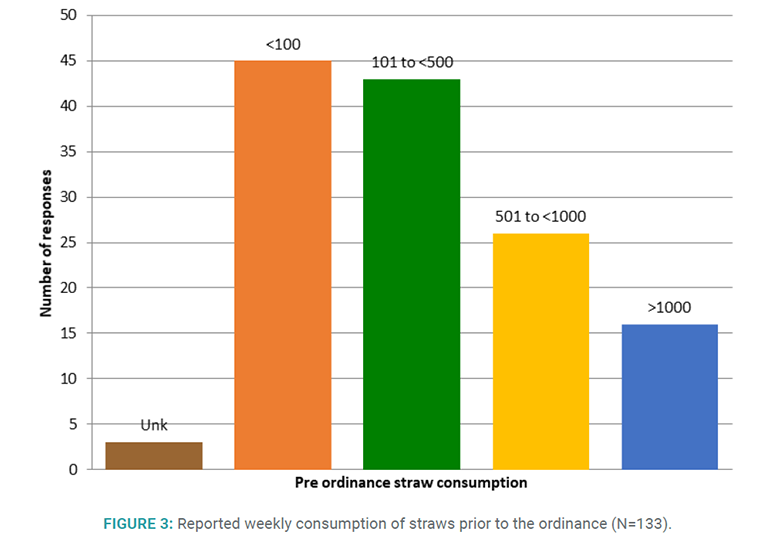 In September 2018, California became the first state in the U.S. to enact a plastic straw law, or “straw only upon request approach.” As of September 2018, 31 city and countywide ordinances had been adopted across the U.S. (13 in California; seven in Florida; three in New Jersey; two in Massachusetts; two in Washington; and one in Minnesota, New York, Ohio and South Carolina), according to the study.

Additionally, there have been several communities that have instituted an outright ban on plastic straws and bags and disposable foodservice waste. In January 2019, Berkeley, Calif., passed legislation that requires customers to pay a 25-cent fee per disposable cup. That legislation will make disposable items like utensils, straws and napkins available only upon request or at self-service stations, takeout food to be served only using composable dishes and utensils by January 2020 and dine-in food to be served only using reusable dishes and utensils by July 2020.

“I think that is a logical step that communities could look at,” notes Wagner. “Europe is looking to ban all single-use rather than just an item, like a straw or a bag. I think what Berkeley has done now is not transferrable to all communities, but it certainly raises that as a policy instrument option.”

“It’s one more policy instrument in the toolbox that has worked quite well with bags,” he adds. “I think it’s logical that some communities could see that potentially. But in order to get people to switch to paper or other straws, you’ve got to raise the price of the undesirable product and hopefully make it a more cost-effective decision for the business.” 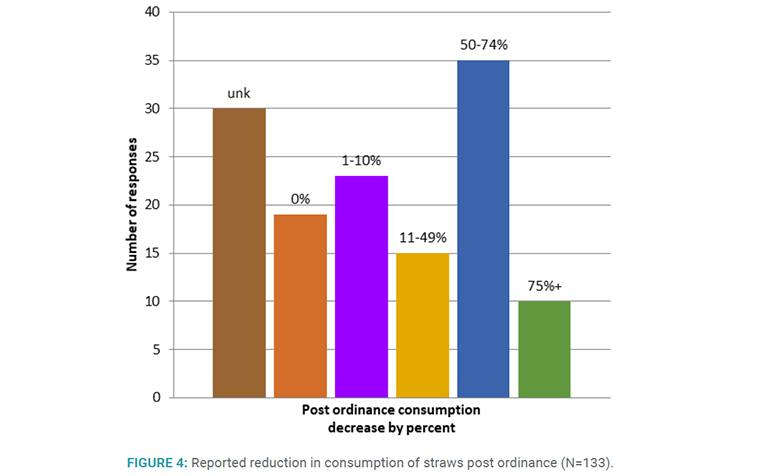 Before releasing his findings on plastic straws, Wagner had completed a study on plastic bags and on polystyrene foodservice ware. He conducted a polystyrene bag study for Maine and looked at ordinances for both of those. He also published a paper on every municipal ordinance in the U.S. regarding single-use bags about a year ago.

Right now, Wagner is working on an expanded polystyrene study, as businesses and communities have been scrutinizing the impacts of plastic utensils and cup lids. But what it really boils down to is getting people to think before they act, he points out.

“That’s difficult because if it’s just handed to you all the time, most of us don’t have that opportunity to think and say, ‘No, I don’t want that,’” he explains. “I think part of that is rethinking the reliance on single-use items where they are not necessary. Businesses have habitualized the process that we are all in, and it’s hard to break that unless you flip the habitualized process the other way around. If you just flip it around, then you can make significant reductions.”