The State of Bag Bans 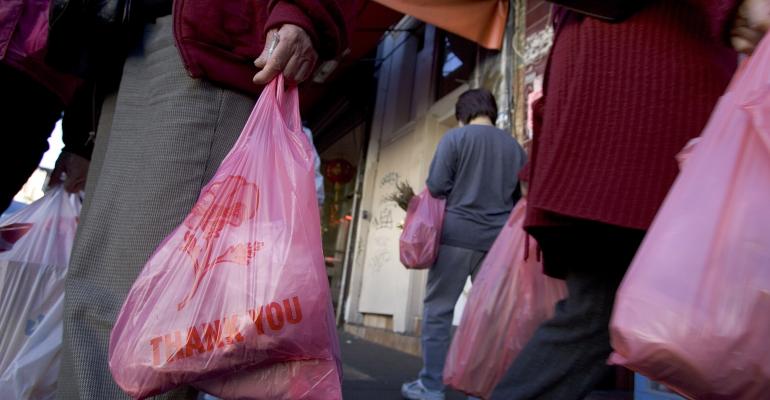 SAN FRANCISCO - MARCH 28: People walk with groceries in plastic bags in Chinatown on March 28, 2007 in San Francisco, California. The Board of Supervisors in San Francisco approved groundbreaking legislation to outlaw plastic checkout bags at large supermarkets in about six months and large chain pharmacies in about a year. The ordinance is the first such law in any city in the United States and has been drawing global scrutiny this week. (Photo by David Paul Morris/Getty Images)
California’s law went into place after nearly a decade of debates, resolutions and referendums.

With California finally voting in a statewide referendum to enact its plastic bag ban in the 2016 election, the national battle over plastic bag bans entered its latest phase. While there are municipalities and counties across the country with bans in place, California’s is the first statewide ban.

Overall, between 2015 and 2016, 23 states proposed bills to regulate plastic bags in retail settings, according to the National Conference of State Legislatures.

On the flip side, a handful of states have gone in the other direction by proposing or enacting legislation barring local governments from regulating their sale or use. In essence, some states have banned plastic bag bans.

Environmentalists argue that plastic bags kill marine life, gum up MRF equipment, stockpile on landfills and costing retailers billions of dollars, an expense that trickles down to consumers.

Plastic bag manufacturers, meanwhile, counter that nearly half of people don’t use reusable alternatives. Further, there will likely be less bags floating around, they say, but more plastic overall because reusable plastics bags are much thicker.

Consumers don’t reuse the replacement bags as often as you would think, says Phil Rozenski, senior director of sustainability for Novolex, manufacturer and recycler of plastic and paper bags. He is also the policy chair of the American Progressive Bag Alliance (APBA), which represents plastic bag manufacturers. The APBA reports that people don’t bring their reusable bags to the store 40 percent of the time and end up buying more on their next shopping trip.

Most Californians wanted the ban

California’s law went into place after nearly a decade of debates, resolutions and referendums. Now that it is the law, all eyes are focused on the Golden State to see what results the ban reaps.

The ban passed by a close margin, but many communities already had bans in place. And there, support for the statewide measure was strong.

“All 151 communities with a policy in place when the legislation was put on the November 2016 ballot supported it,” Mark Murray, executive director of Californians Against Waste (CAW) says. “To me that’s the message for the rest of the country—that statewide, the final vote was close (52 percent to 48 percent), but the ban was overwhelmingly supported in communities that had a policy.  They were living with it and it worked for them.”

“This is an environmental victory that, moving forward, will mean an immediate elimination of the 25 million plastic bags that have polluted California every day,” Murray adds.

The Surfrider Foundation is examining potential impact of California’s law and will report in December 2017 on progress made on beaches.

“This law mandates that bags [sold in place of single-use bags] be at least five times thicker. As an industry, we are beginning to see indications that, while plastic bag usage is down, the total amount of plastic is up,” says Rozenski. He cites alternative solutions.

“We need to talk broader than plastic bags.  We must look holistically at the waste stream. We need to design for recycling [product content]; design for disposal … and educate the public about ways to avoid creating litter.”

Nationwide, 1.14 billion pounds of plastic bags and film were recovered for recycling in 2013, up 74 percent since 2005.

That’s not good enough, say environmentalists, pointing out that volumes of these bags are improperly disposed of. The World Economic Forum reports if plastics continue inundating oceans at the current rate, these water bodies will hold more plastic than fish by weight by 2050.

California Grocers Association (CGA) supported the bill because it sought statewide consistency, unobtainable with multiple local ordinances. Not to mention, its grocers were spending more than $400 million a year on plastic bags.

At least in California, the ban will not be a shake up for this niche.

“… nearly half of California’s population already had plastic bag bans, [so] for many retailers it will be business as usual,” says Dave Heylen, CGA vice president, Communications. For the remainder of the state, there will be an adjustment.

“Like all laws and regulations, the industry will simply adapt. The impact really lies with consumers as they alter their shopping behavior.”

Bag regulations of all shapes

Some jurisdictions around the country have discussed taxing plastic bags to minimize their use. Multiple jurisdictions have imposed bag fees and others are considering them. Other regions have pending mandates such as those that would require storefront receptacles for collecting the bags for recycling and requiring plastic bag manufacturers to register with regulators and pay them fees. (Chicago, meanwhile, recently repealed its ban.)

Depending on which way the pendulum swings, Massachusetts may become the next state to ban single-use carryout bags.

This will likely be a national trend, projects Tova Handelman, coastal resource coordinator for Heal the Bay.

“I believe other states will look to California's single-use plastic bag ban and follow suit. It makes sense economically; it improves the local environment; it certainly helps prevent plastic bag litter from harming and killing ocean animals … [and] it is an effective way to realize widespread behavior changes.”