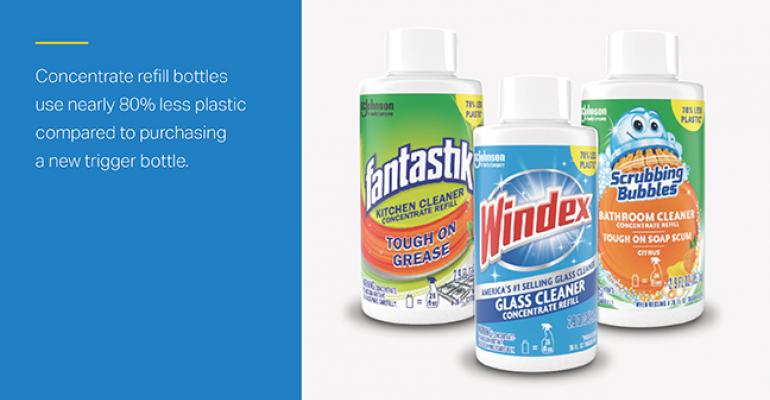 Since the unveiling of Windex concentrates in 2011, SC Johnson has expanded its refill options to other popular cleaning brands.

As an early champion of concentrate products nearly a decade ago, SC Johnson announced it is continuing to address the plastic waste crisis by expanding and widening access to its concentrate offerings.

"Plastic waste is becoming a bigger and bigger environmental problem," said Fisk Johnson, chairman and CEO of SC Johnson, in a statement. "We hope more people can give concentrates a try as every single time you use a concentrate bottle, you use nearly 80 percent less plastic waste." 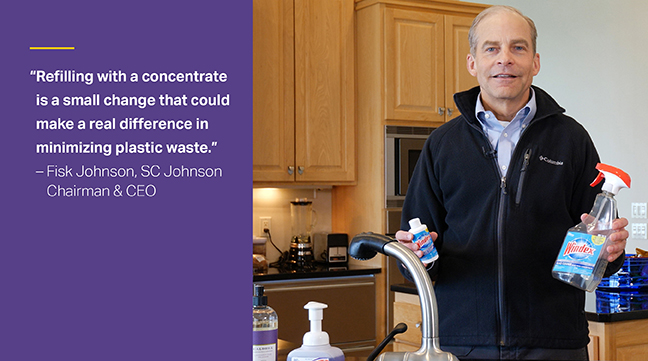 Since the unveiling of Windex concentrates in 2011, SC Johnson has expanded its refill options to other popular cleaning brands, including Pledge, Scrubbing Bubbles, Shout and fantastik.

The new line of SC Johnson concentrates will begin rolling out in the U.S. and Canada this month, with Scrubbing Bubbles, Windex and fantastik bottles and two-count refills set to hit Amazon and other e-commerce retailers—including Target and Walmart websites—first. The next wave of concentrate refills—including Scrubbing Bubbles, Windex and Mr Muscle­—will be available for purchase online in Mexico this July, and in the United Kingdom starting in August. China and Japan will follow in September.

Beyond ease of use, the benefits of concentrate refills are primarily environmental, noted the company. SC Johnson trigger bottles, for example, deliver more than 10,000 sprays and can be refilled dozens of times.

“Refilling with a concentrate is a small change that could make a real difference in minimizing plastic waste," said Johnson. "Together, we can reduce plastic waste and work toward a cleaner planet." 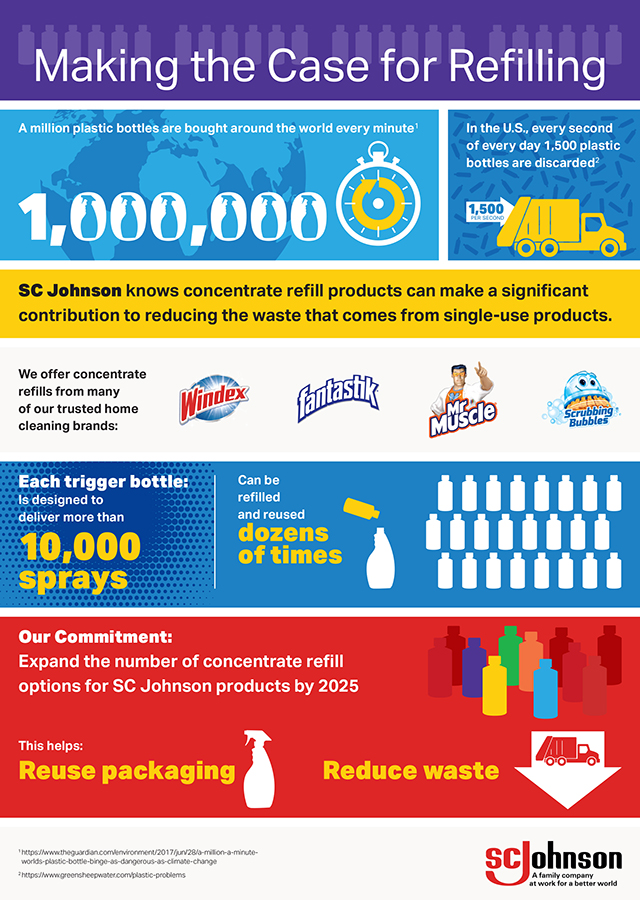 SC Johnson Windex bottles have been made with 100 percent post-consumer recycled plastic since 2015, and this spring, the company introduced the first-ever 100 percent recycled ocean plastic bottle from a major home cleaning brand with its Windex Vinegar line. Plans are underway to launch a 100 percent Social Plastic Windex bottle with partner Plastic Bank by fall 2019; the bottle is designed to help the environment and address poverty at the same time.

Five Southeast Asian countries—China, Indonesia, the Philippines, Vietnam and Thailand—accounted for up to 60 percent of the plastic waste leaking into the ocean, according to a 2015 report by the Ocean Conservancy and the McKinsey Center for Business and Environment. By raising collection rates to an average of roughly 80 percent across these five countries, plastic waste leakage into the ocean would be reduced by almost 25 percent.

To help address this issue, SC Johnson has partnered with Plastic Bank and opened nine collection centers in Indonesia with plans for expansion. Through this program, the company has created recycling programs as part of the solution to minimizing plastic waste and addressing poverty. The program is transforming lives by providing social and economic benefits in exchange for recycling used or collected plastic waste. It is designed to educate on recycling and get people to live with and use plastic responsibly.