The Quest to Recycle Beads from Mardi Gras

These are a few of the new offerings from a Big Easy nonprofit upping its crusade to green the gluttonous throw-away culture of Mardi Gras.

Meet the Arc of Greater New Orleans, a United Way agency that has been collecting and recycling beads for more than a decade. Last year, the organization’s year-round effort raked in 150,000 pounds of beads. 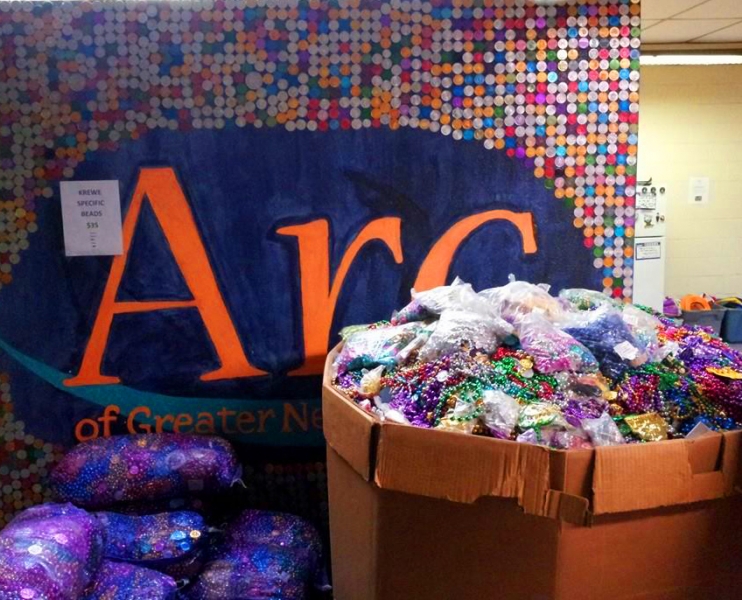 “People come to our warehouse and it’s mind blowing for them. This is the most Mardi Gras beads that anyone will see in their lives,” says Margie Perez, recycling coordinator for the Arc, which employs people with intellectual disabilities to sort beads for resale to float riders in parades throughout Carnival. “If it wasn’t for our efforts they would be sitting in the landfills or in peoples’ attics. They say New Orleans is sinking because of all the beads in attics. We are saving New Orleans one bead at a time.”

The Arc sourced the festive environmentally friendly pieces from New Orleans-based Zombeads, which offers this global line, but primarily sells products made exclusively through partnership with artists and manufacturers in the Gulf Coast region from recycled and locally sourced materials.

“It would be a wonderful thing if there were no more beads being made in China but we know that’s not the reality,” Perez says “This year we decided to offer some fair-trade items in the middle of all of our Mardi Gras-bead-plastic craziness. They are beautiful and what I’m finding is that a lot of people are buying them as gifts instead of for throwing which I am fine with.”

Perez says her organization mounts the largest recycling effort in the Crescent City. But that’s no match for the 20 million pounds of beads that are imported from China every year.

“There could be 100 businesses doing what we do and we still wouldn’t be able to save every bead that’s out there,” says Perez, who added that the agency realized after Hurricane Katrina, it could create business model from its earth-friendly efforts.

People are encouraged to drop off their beads at one of the Arc’s four locations in the area or at any of the more than a dozen purple and yellow bins strategically placed throughout the community at sites such as Whole Foods markets and the local mall. 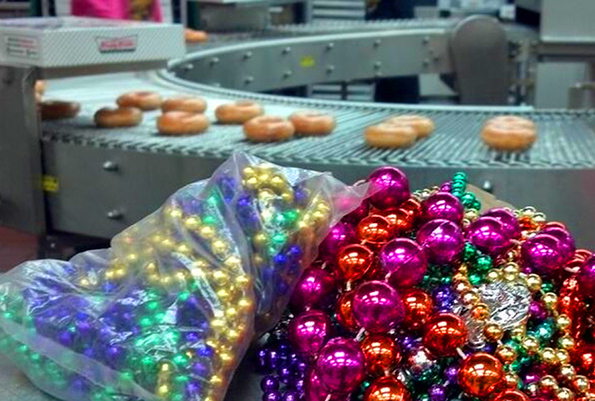 “People who attend the parades will donate their beads to us after they have gone through and kept the good ones,” she says. The Arc’s largest haul in 2014 came from a bead drive sponsored by Krispy Kreme. “If you brought in a bag of beads, you got a dozen donuts. They collected 60,000 pounds of beads, up from 15,000 pounds in 2013.”

Volunteers with the Arc man two post-parade events. The first is a cleanup effort at the Superdome following the Krewe of Endymion, which is one of the largest of the 80 parades during Mardi Gras. They also follow behind floats in the Krewe Freret so people can throw their beads into bins as they roll by.

Three full-time employees along with others from day programs and volunteer groups work to sort the beads by color to be repackaged and sold in 30-pound sacks. The 48-inch strands are $30 (loose) or $40 (banded). (The fair-trade beads sell for $3.50 a strand; boas are $3; frisbee-like discs are $4; and seed packets are $2.)

“People like our mission and that they supporting a social enterprise,” Perez says. “Not only are we employing people with disabilities, we are recycling and saving money for people. Five years ago we recycled 50,000 pounds and now we’re tripling that because of word of mouth, repeat customers, repeat donors, and people are really becoming conscious of the fact that this plastic isn’t going to break down in our lifetime.”