Polyethylene terephthalate (PET) is a plastic resin used to make bottles for beverages, food, and other household and consumer products. PET is a relatively new packaging resin. The PET bottle was patented in 1973. Four years later, the first PET bottle was recycled.

For many years, soft drink bottles were the biggest user of PET resin. “Custom” bottles are used for other products such as salad dressing, peanut butter and jellies. Custom bottles now account for more than half of PET containers by weight. PET is also used for film, oven trays, sheeting for cups and food trays, oven trays and other uses. This Profile is limited to PET containers.

Increased consumption of water and soft drinks away from home along with continued lightweighting of PET bottles has created challenges for increasing the PET recycling rate. Increased use of PET bottles has reduced the size of the waste stream because they replaced heavier steel and glass containers. 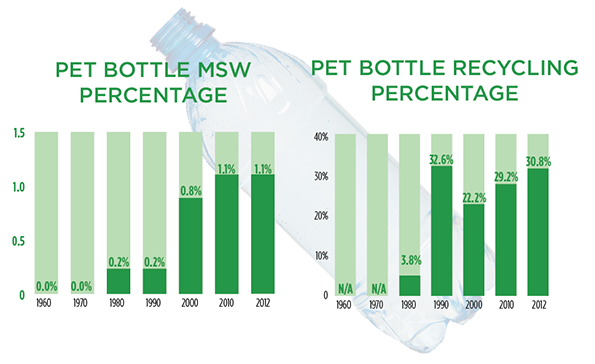