HDPE resin is produced from the chemical compound ethylene. HDPE bottles are blow-molded and are used for milk and other liquid products, such as detergents, shampoos, motor oil, drugs and cosmetic products. Most milk and water bottles use a natural-colored HDPE resin. Bottles used for other products often have colorants added to the resin. Injection-molded HDPE containers are used for products such as margarine and yogurt. 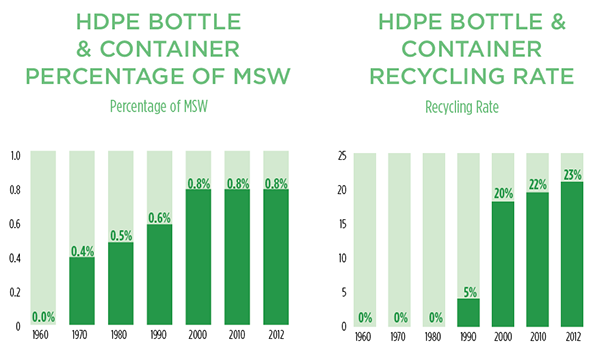 More HDPE bottles are produced than other containers. HDPE resin can also be used to make bottle and container caps, and flexible packaging such as sacks and trash bags.  HDPE is also used in many non-packaging products.

Note: This profile only covers HDPE bottles and containers.