HomeRecyclingPlasticsPlastic Bags Cost Phoenix $1M Per Year in Lost Time
Recent
Machinex Upgrades West County Resource Recovery in California
May 27, 2022
EREF Hosts Record-Breaking Charitable Auction, Proceeds Directly Support Scholarships and Scientific Research
May 27, 2022
This Week in Waste: Top Stories May 23 - May 28
May 27, 2022
Landfill Emissions Measurement: What We Know, What We Need to Know
May 27, 2022
POLL
SWANA & Oceans Caucus Foundation Host Congressional Briefing on Recycling
May 27, 2022
Collaboration Leads the Way in Connecticut to New Extended Producer Responsibility Law for Management of Discarded Residential Gas Cylinders
May 27, 2022
An Uber-Style Service for Curbside Recycling
May 26, 2022
S&B Selected as Contractor for New Hope Energy’s Advanced Plastics Recycling Unit
May 26, 2022
Need to Know
brought to you by 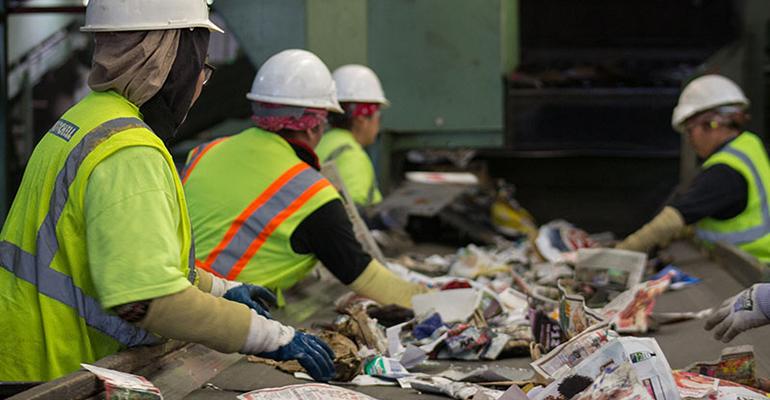 Phoenix recycling officials say that plastic bags cost the city approximately $1 million every year in lost time, mainly due to machine jams and other contamination.

The city runs a plastic bag drop-off program in alliance with the Arizona Food Marketing Alliance, where residents can bring several different kinds of plastic bags to certain grocery stores and dispose of them. Despite the program being around for 10 years, improper recycling of the lightweight bags is still a major headache for the city.

“(People) tend to think that because it’s plastic, it is recyclable,” said Chad Hardy, the solid waste superintendent for Phoenix. “And they don’t understand the way the machinery works – its belts, its conveyors, its drums, its beaters – and when those things are moving, the plastic bags get stuck in there. And there’s no weight to them, so they aren’t able to move through the system.”

Mounds of recyclables whiz by on conveyor belts before they’re sorted and prepared for resale. The machinery at the transfer stations shuts down once or twice per day because of non-recyclable items.

The 27th Avenue and North Gateway Transfer stations process about 250 tons of recycling each day, and officials estimate about 30 percent of that is contaminated.