A Look at a Labyrinth in Spain Made from Plastic Waste 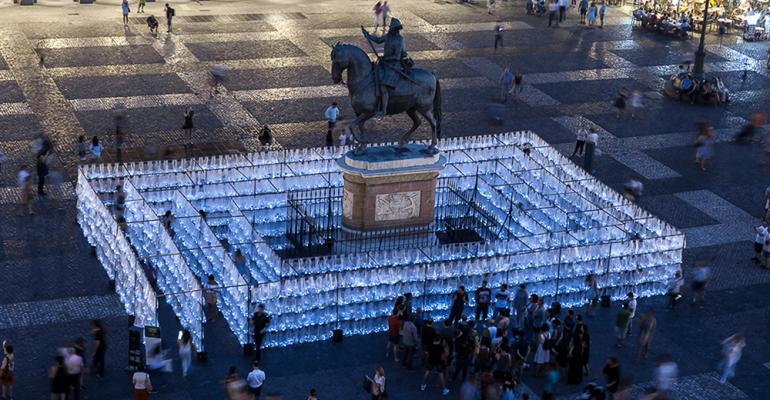 It's no secret that plastic waste is a growing global issue. And to help paint a picture of just how large the issue is, Luzinterruptus, the anonymous Spanish art collective, designed a labyrinth of plastic waste in the middle of the Plaza Mayor in Madrid, Spain.

The 170-metre long, three-metre high installation was created from approximately 15,000 plastic bottles collected from nearby universities, hospitals and other institutions over the course of a month. It was built as part of the city's fourth Centennial Celebration of Plaza Mayor and served as an extension of a similar project that Luzinterruptus designed in Poland in 2014.

The installation, which was on view earlier this summer, also included a number of intricate paths and narrow passages that forced visitors to keep guessing the way out. The interior featured no reference points, and the smell of plastic enhanced the overall experience of the installation, according to Luzinterruptus.

The group hopes that its projects will help raise awareness around the importance of recycling before the issue of plastic waste takes a turn for the worse.

Luzinterruptus is heading to Las Vegas and Bordeaux, France, next, where it will create works of art made from plastic bags. The group plans on heading back to Madrid in October to design a larger project from 60,000 plastic bottles.

In this gallery, you can view a selection of images from the installation.