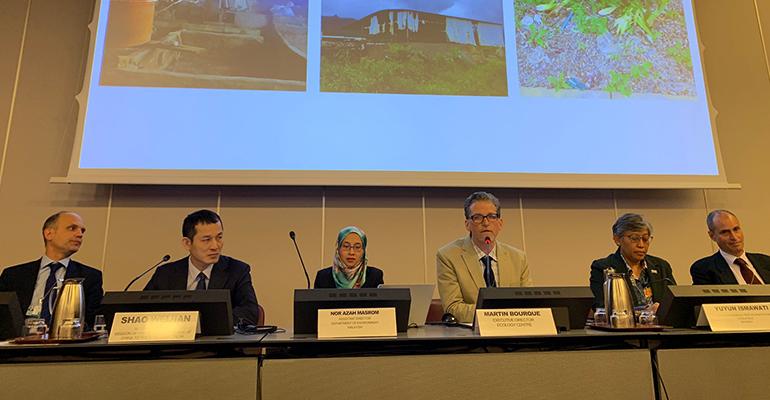 In the wake of the U.N. Basel Convention vote, it’s time for the recycling industry to reject the idea of recycling more at all costs and focus on recycling better.

With the May 10 vote to add new measures to restrict and bring disclosure to plastic waste trade through the U.N. Basel Convention, the years-long tremor shaking up plastic recycling became a massive earthquake. Countries will now have the right to be notified in advance about plastic waste trade shipments and will have the right to refuse those shipments. In a few short months, global policy has taken a major leap forward.

After China banned imports of most plastic waste in 2018, developing countries, particularly in Southeast Asia, have received a huge influx of contaminated and mixed plastic wastes that are difficult or even impossible to recycle. Norway’s proposed amendments to the Basel Convention provides countries the right to refuse unwanted or unmanageable plastic waste.

The decision reflects a growing recognition around the world of the toxic impacts of plastic and the plastic waste trade. The majority of countries expressed their support for the proposal and more than one million people globally signed two public petitions from Avaaz and SumOfUs.

Yet, even amidst this overwhelming support, there were a few vocal outliers that opposed listing plastic under Annex II of the Basel Convention. These included the United States, the largest exporter of plastic waste in the world; the American Chemistry Council, a prominent petrochemical industry lobbying group; and the Institute of Scrap Recycling Industries, a business association largely composed of waste brokers. As the United States is not a party to the Basel Convention, it will be banned from trading plastic waste with developing countries that are Basel Parties but not part of the Organization for Economic Cooperation and Development.

However, what the U.S. recycling industry does in this moment will define it for a long time to come.

Change is coming to the plastic industry itself, as brands and plastic producers are under increasing pressure to redesign packaging systems and reduce plastic production and marketing overall. The U.S. recycling industry can be pulled along with that change or can help lead calls for system and product redesign and waste reduction.

As collected no-value plastic became contamination, cities and recycling companies now have no idea where exported plastic waste collected for recycling is ending up. And the brands making the junk plastic also had no idea. And until recently, they bore little recognized responsibility for this problem.

In a “NOTHING WASTED! Pioneers & Visionaries” presentation at WasteExpo on May 8, I shared stories like what befell the village of North Sumengko in East Java, Indonesia, which turned from a largely agricultural community to a dumping ground for foreign plastic in the span of one year. These and other stories are described in detail in GAIA’s new report called “Discarded” and on wastetradestories.org, including astonishing pictures of U.S. plastic waste exports. As Martin Bourque, executive director of Ecology Center, observed after speaking at Basel Convention side event, "False claims by the plastic packaging industry about the recycling of mixed plastics has resulted in a complete disaster for communities and ecosystems, particularly in Asian countries, and a growing distrust of recycling industry by U.S. consumers."

As a result of increased scrutiny of the final resting place for exported plastic junk, the U.S. recycling industry is now taking the heat for single-use plastic problems created by brands, the plastic industry and the packaging industries. This situation is not dissimilar to the way cities and countries in Asia are being cast as the primary cause of plastic pollution in the ocean: the responsibility for increasing the amount of junk plastic in the marketplace lies at the feet of companies like Nestlé, Procter & Gamble, Unilever, Coca-Cola and other brands whose polluting business practices are exposed in brand audits.

I believe that many in the recycling industry personally care about building a circular economy, conserving resources and ending the intensifying pillaging of natural resources. Pollution from the plastic waste trade like this is surely not the legacy that people working in this industry seek.

It’s easy to see that we must take action to recycle better, not recycle more at any cost. And the recycling industry is in a unique position in the lifecycle of materials to make an impact. Recycling companies can follow the lead of companies like Eureka Recycling that track and disclose their recycling end markets, which are all in North America. The recycling industry must take action to end exports of plastic and even paper as quickly as possible and push for recycled content mandates and other ways to drive domestic recycling infrastructure overall.

But under any conditions, plastic recycling alone won’t be enough to fix the single-use plastic problem: to thrive, both the planet and the recycling system need less plastic. Upstream reduction of plastic will be vital. The recycling industry has an opportunity and responsibility to pull back the curtain on products marketed as recyclable that simply don’t fit, building ongoing, substantive feedback loops to brands, the packaging industry and plastic producers. Recyclers can send a message to brands: packaging is not recyclable unless it actually gets recycled.

Fundamentally, the entire recycling industry should wake up to the threat of single-use plastic and other disposables messing up the recycling stream and support new policies to reduce waste generation. If the quantity and quality of packaging in the marketplace continues at the current trajectory, collection and materials recovery facilities will be deluged in more junk, making quality recycling even more challenging. With less plastic overall, recycling for other commodities will be less contaminated, and recycling itself will be more successful. It’s time for the recycling industry to reject the idea of recycling more at all costs and focus on recycling better.

The brands and plastic producers can choose to move away from single-use packaging and come up with new systems that reduce waste overall. Some in the recycling industry already have been sending clear messages to brands and plastic producers, such as the National Recycling Coalition clarification that energy recovery of plastic waste is not recycling, an important distinction in the waste hierarchy that is being challenged by brands that call plastic-to-fuel and burning plastic in cement kilns a form of recycling. Let’s be clear: companies enabling wasting and further pollution are on the wrong side of history.

A few influential recycling companies are speaking out, like Recology CEO Mike Sangiacomo’s op-ed in San Francisco Chronicle titled “It is time to cut use of plastics.” He called for producers to take fast action to reduce plastic production and for policy if plastic industry doesn’t act quickly. “Dear Plastics Industry: We are Headed for a Divorce,” from Eco-Cycle Policy and Research Director Kate Bailey in Waste360, is another excellent example.

Follow the lead of mission-based nonprofit recycling operations like Eco-Cycle, Ecology Center, Eureka Recycling and Recycle Ann Arbor. They are skillful at running extremely successful recycling operations, giving meaningful feedback to producers and calling for innovative programs to reduce the generation of waste.

With single-use plastics, both our society and our planet are in a moment of crisis. It is moments of crisis that give us the biggest opportunities. I hope that here in the U.S. we will rise to the challenge and embrace the goal of reducing waste generation overall.

Monica Wilson is associate director of GAIA U.S. and has been part of GAIA’s team since 2002. She serves on the board of Zero Waste USA and was honored to be named the California Resource Recovery Association 2012 “Recycler of the Year.