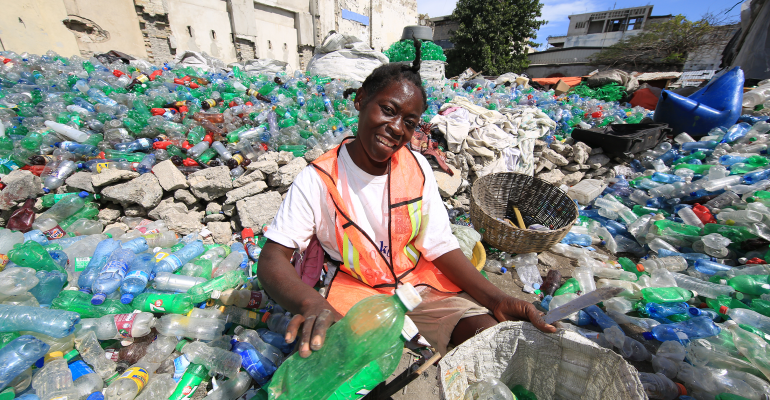 About one garbage truck full of plastic is dumped into oceans every minute, inundating poor countries with lacking waste management infrastructure to deal with it. Their fast-accumulating ocean pollution adds to other distresses: little to no money for food, health care, or to send kids to school. Social enterprise company Plastic Bank created a model to address both problems: ocean-bound plastics and poverty.  Launched in 2013, it turns plastic trash into cash for locals who collect it.

About 23,000 people in Haiti, the Philippines, Indonesia, Brazil, and Egypt collect plastic waste from their communities, deposit it at nearby collection points, and are paid by Plastic Bank.  In 2020 they collected about 2 million pounds each month of ocean-bound trash, from packaging to plastic furniture. To date they have recovered a billion bottles alone and have increased their income by up to 43%. Owners of the small local companies who hire them can net up to $3,000 a month.

“What we collect we call ‘Social Plastic;’ it’s helping transform communities and empower people while we get quality post-consumer material, and we work with local processors to add more value,” says Plastic Bank CEO David Katz.

Some of the material is reused locally, though most is baled or shredded, exported, and bought by businesses, mainly consumer goods companies, who put it in their products and packaging. Among Plastic Bank’s largest corporate partners is cleaning supplies manufacturer SC Johnson.

Now 62% of SC Johnson’s packaging is recyclable or reusable, and it’s shooting for 100% by 2025, says Alan VanderMolen, chief Communications officer for SC Johnson.

“Key to reaching that goal will be building a closed loop recycle platform similar to what we are doing with Plastic Bank,” he says.

The company has incorporated more than 10,400 metric tons of ocean- bound plastic, (equivalent of 500 million bottles) it got through this partnership into packaging for Windex in North America and Mr Muscle in the UK. 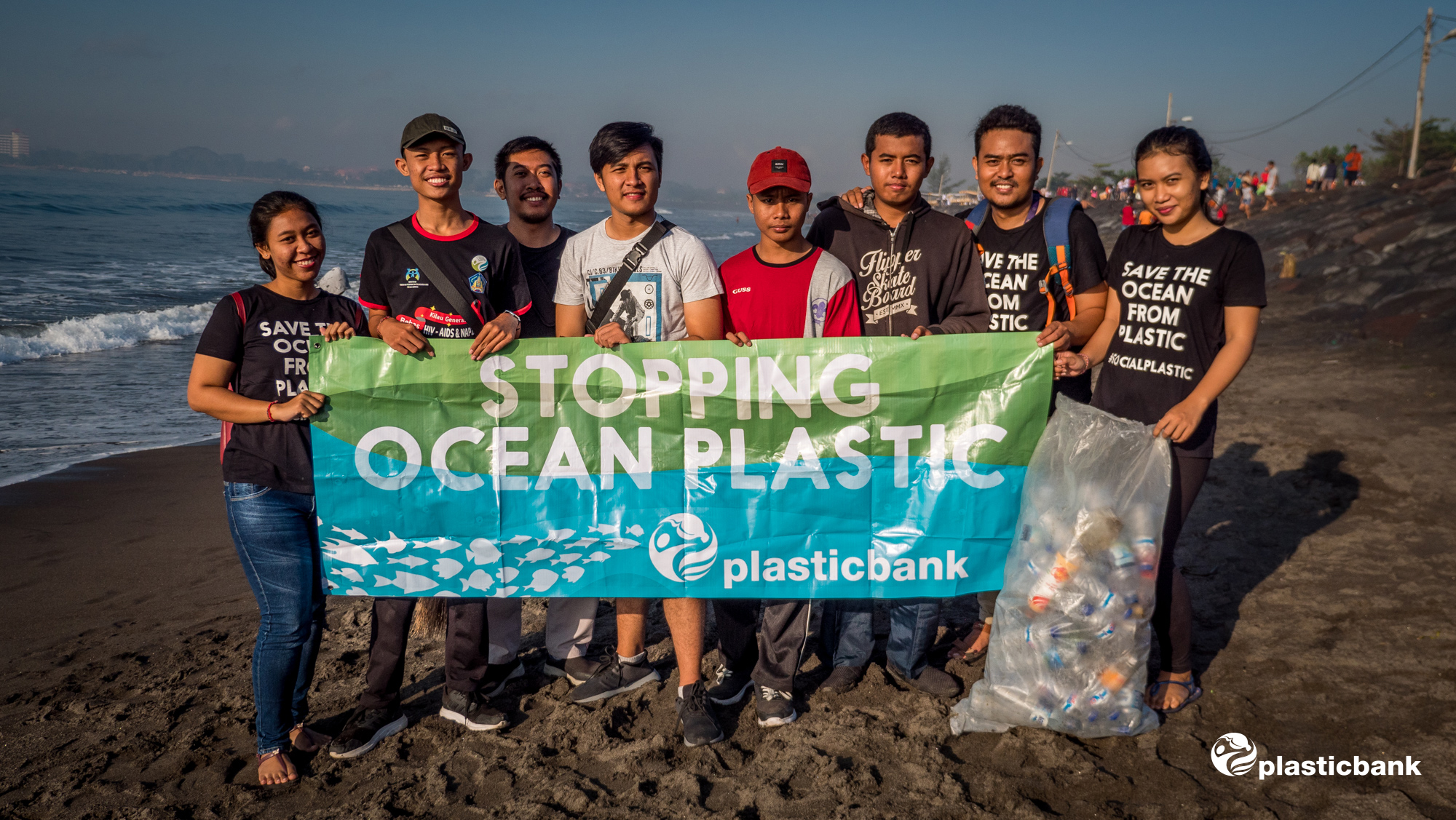 SC Johnson hopes to collect more than 30,000 metric tons of the material (equivalent of 1.5 billion bottles) from Plastic Bank by the end of 2022 through expansion into areas such as Vietnam and Thailand.

“That’s where most ocean-bound plastic comes from.  We want to get that supply out of the waste stream and into a closed loop system,” VanderMolen says.

The plastic is shipped to an SC Johnson plant in Indiana, turned into pellets which are shipped to Illinois where it’s further processed, then shipped to Wisconsin and ultimately put into packaging.

“To collect, treat, and recycle while meeting technical specs is more difficult and expensive than working with virgin plastic. But that’s a cost we are happy to bear. Our goal is 100 percent recyclable or reusable, and we are going to make that goal,” VanderMolen says.

What led to Katz’s motivation to initiate this money-for-plastic concept started a long time ago, though would not materialize for a while.

“I grew up in Canada, and my playground was a beach. I could see it degrading 35 years ago, and it was always on my mind. There is a photographer who took pictures of decomposing corpses of albatross chicks and that further impacted me and inspired me to begin work on a solution to protect life from environmental degradation,” Katz says.

But the idea didn’t start to take form until after he went to a seminar on issues facing humanity and learned something he found fascinating.  A presenter had a 3D belt made from a single, long strand of plastic. It sold for $80, but the material only cost $10.

“I realized it was the shape of the material, not the material itself, that determined the value. How might we change perception of a [used] bottle and get people to look at it differently— as something with value, not trash?” he asked.

An ocean-bound waste-to-money exchange concept could work, he figured. People don’t throw out currency, and by collecting these materials for income they can have autonomy.

What started as a two-man operation is now a staff of 150 that has sold over 18 million pounds of Social Plastic and has received special recognition by The United Nations as well as the attention of the Vatican. Katz who now partners with churches that do collections, had the opportunity to talk to Pope Francis about Plastic Bank’s work.

Besides faith communities, the operation has found other niches where it tries to deepen community engagement and learning.

The team goes into schools to teach children about stewarding the environment, who in turn teach their parents, many who now pick up plastic debris and bring it to school in exchange for their children’s tuition.

The education extends to training local companies who hire collectors in areas including basic accounting, enrollment of recyclers, and strategies to increase volumes.

Home appliance recycler Lasso Loop is the newest partner. Through its Invite a Friend rewards initiative the company makes a $100 contribution to Plastic Bank, on behalf of each customer when that customer delivers their Lasso appliances.

"Whilst we are striving to change the future of recycling, with Plastic Bank's help, we will also work toward cleaning up the plastic that has already made its way to our oceans as a result of the currently broken recycling system," stated Aldous Hicks, Lasso Loop co-founder.

The global enterprise’s plan is to expand to Thailand, Cameroon and, later, Tanzania and Kenya.

“We will make our way to Africa to keep putting value in the hands of people who need it most. There are a billion people in Africa, and a lot of degradation,” Katz says.