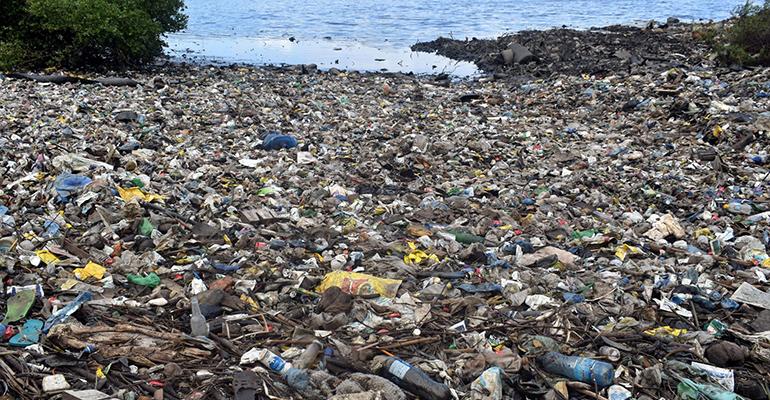 The initiative, called “Sea The Future,” is projected to raise in excess of $20 billion annually for global recycling, collection and environmental remediation.

“Industry, fully supported by governments and regulators, is the only sector that can drive the urgent, global shift needed to save our oceans from plastic waste,” said Andrew Forrest, founder and chairman of Minderoo Foundation, in a statement. “This existential threat requires a global solution able to transcend borders, politics and corporate responsibility. We have less than five years to make this happen. Only a broadly adopted, international industry-led approach will keep plastics in the economy and out of the environment.”

Current efforts to stem the increase in global plastic waste are disjointed and inadequate, with most of the 350 million-plus tonnes of plastic produced every year entering the world’s terrestrial and marine environment. Estimates suggest that plastic costs humanity more than 2.2 trillion a year in environmental and social damage.

The Sea The Future initiative will attach a greater value to fossil fuel plastics, through a voluntary contribution payable on plastics produced from fossil fuels. The voluntary contribution is not payable on recycled plastics, immediately making it a cheaper alternative feedstock. This drives demand that dominoes through the value chain and turns plastic waste into a cashable commodity, driving collection efforts, poverty alleviation through dignified work and recycling, particularly in Southeast Asia where the waste problem is at its worst.

The initiative launched at the United Nations Headquarters in New York. Governments, nongovernmental organizations and major companies, many of which were in attendance, have expressed support for the initiative.

“This bold yet attainable industry-driven solution is exactly what is needed to match the scale of the problem,” said Dr. M. Sanjayan, CEO of Conservation International, in a statement. “Adopting this initiative can help ensure we have #NoPlasticWaste in our lifetime. After all, no one company or country wants to shoulder the burden on their own. The ‘Sea The Future’ initiative brings us all together to be the solution our environment demands.”

“This Minderoo Foundation initiative represents exactly the type of systemic thinking needed to build a circular economy, by creating value for used plastic and helping decouple our economy from fossil fuels,” said Andrew Morlet, CEO of the Ellen MacArthur Foundation, in a statement. “It’s well aligned with the Ellen MacArthur Foundation’s vision to eliminate the plastics we don’t need and to circulate those we do. Together, we can make plastic pollution a thing of the past.”

Funds raised by the initiative are projected to amount to at least $20 billion annually. The funds will be collected and co-managed by a global environmental and industry body with appropriate regulatory approvals. The funds raised will be channeled into new recycling technologies, collection infrastructure and the recovery, where possible, of existing marine and terrestrial pollution.

The global plastics supply chain—including major producers and users of plastics such as The Coca Cola Company, Walmart Inc, Tesco plc, Unilever plc and India’s largest plastics group Reliance Industries, among others—has responded positively to the initiative, which would drive systemic and industry-led change on a global scale.

The initiative is also expected to make a material contribution to reducing plastic-induced climate change by some 70 percent in the context of the global community’s targeted temperature increase range by 2050.

Minderoo Foundation said it has committed to underwrite up to five years of audit fees for a total cost of $260 million, plus $40 million in establishment costs, subject to appropriate conditions. The results of this audit and verification will be posted to a central database, accessible online to anyone around the world.

A new digital and social media campaign, #NoPlasticWaste, has been simultaneously launched to explain the realities of plastics production, highlight the opportunity that exists and galvanize public support for the initiative.

“We need the world to treat plastic like other commodities, and we can do this if we eliminate the price disparity between fossil fuel plastic and recycled plastic,” added Forrest. “The ‘Sea The Future’ initiative will be the catalyst needed to shift the entire economic system from bad, environmentally detrimental plastic to good, permanently recycled plastic, and the market will then take care of the rest. It puts a world with no plastic waste in clear sight.”