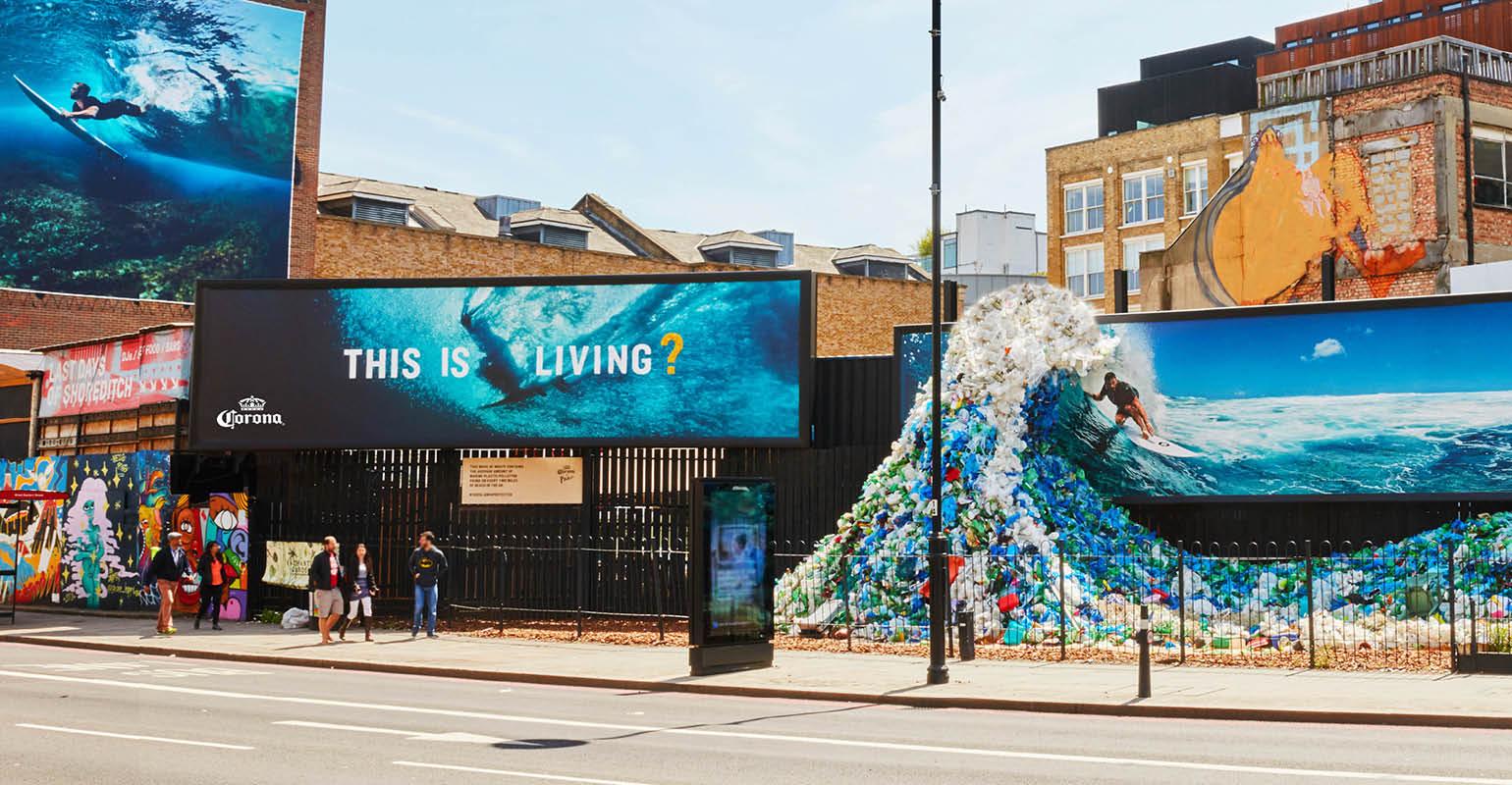 On World Oceans Day, Corona twisted its own campaign tagline and imagery to show the unfortunate fate of paradise plagued by plastic pollution.

Corona, a brand of AB InBev, took the issue of marine plastic pollution to the global stage by hijacking iconic symbols of paradise for World Oceans Day (June 8). Roughly 8 million metric tons of plastic waste are dumped into the ocean each year, and to raise awareness of this fact, the brand inserted plastic into other places it doesn’t belong. Corona twisted its own campaign tagline and imagery to show the unfortunate fate of paradise plagued by plastic pollution. Additionally, Corona and Parley unveiled a limited-edition Hawaiian shirt design that incorporated plastic pollution imagery into the pattern. Last month, the partnership changed the name of the “Corona Bali Pro” World Surf League event to “Corona Bali Pro-tected” to make the point that even the most remote and aspirational paradises around the world are suffering. “As a brand that is synonymous with the beach, we are seeing the destruction of shorelines and oceans up close,” said Felipe Ambra, global vice president of Corona, in a statement. “Our ads usually showcase paradise the way we assume it to be, pristine and beautiful, but today it’s increasingly hard to find a beach without plastic. Through our work with Parley, we hope to reverse this trend. This World Oceans Day, Corona wants to remind the world that we all need to protect our beaches to continue enjoying them.”

In addition to changing out its tagline and imagery, Corona used plastic from nearby beaches to build sculptures in various cities. These installations served as a representation of the issue, with the local plastic seamlessly integrated into Corona’s paradise imagery. The “Wave of Waste” sculpture in Old Street, London, for example, featured Australian actor Chris Hemsworth surfing in a wave of plastic collected in the U.K., including waste from Holywell beach by The Marine Conservation Society. The public was encouraged to drop off their own plastic waste to contribute to this work of art, adding to the more than 10,000 individual pieces of plastic that were initially included in the artwork.

“Creating this Wave of Waste has been eye-opening,” said Andy Billett, sculpture artist, in a statement. “From cotton buds and plastic bottles to children’s dummies and plastic bags, it’s shocking to see the wide range of plastic that ends up being washed upon our shores. It’s taken more than 1,000 man hours to create this sculpture, and with it being equivalent to the amount of marine plastic pollution found per two miles of beach in the U.K., I really hope it helps put into perspective the problem we have at hand with plastic waste.”

Although the focus for World Oceans Day was to raise awareness, Corona and Parley are also committed to protecting 100 islands around the world by 2020. Launched last year, the partnership is already working with local communities in the Maldives, Dominican Republic and Chile and will continue to scale up efforts in several more regions within the next year. Corona and Parley also announced a fundraising platform called Clean Waves in May that upcycles plastic pollution into fashion products for purchase, with all proceeds going to additional island protection.

“When you are in the middle of the oceans, exploring magic islands and this belt of plastic bottles surrounds them, then you know, something is dead wrong,” said Cyrill Gutsch, founder of Parley for the Oceans, in a statement. “Corona turned out to be a dream partner, a key ally in our battle against this horrible threat. Our partnership proves that while economy is responsible for the destruction of our seas, some brands can be the key for the solution. Together, we will end single-use plastic in the beverage industry. I am certain.”