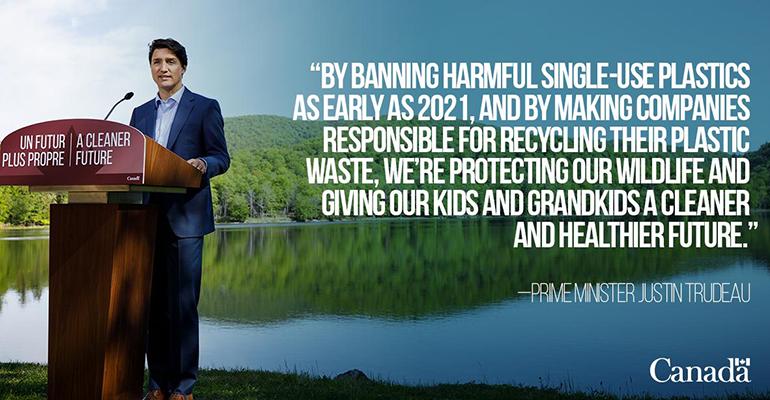 Prime Minister Trudeau announced Canada will ban single-use plastics as early as 2021 and make plastics generators responsible for their waste.

Less than 10 percent of plastic used in Canada gets recycled. Without a change in course, Canadians will throw away an estimated $11 billion worth of plastic materials each year by 2030.

That is why Canadian Prime Minister Justin Trudeau just announced that the Government of Canada is taking additional steps to reduce Canada’s plastic waste, support innovation and promote the use of affordable and safe alternatives. Working with governments and businesses across Canada, the Canadian government will:

“Canadians know firsthand the impacts of plastic pollution and are tired of seeing their beaches, parks, streets and shorelines littered with plastic waste,” said Trudeau in a statement. “We have a responsibility to work with our partners to reduce plastic pollution, protect the environment and create jobs and grow our economy. We owe it to our kids to keep the environment clean and safe for generations to come.”

According to Trudeau, these measures will be grounded in scientific evidence and will align, where appropriate, with similar actions being taken in the European Union and other countries. They will also support the Canadian Council of Ministers of the Environment’s development of an action plan to implement the Canada-wide Strategy on Zero Plastic Waste.

“By improving how we manage plastic waste and investing in innovative solutions, we can reduce 1.8 million tonnes of carbon pollution, generate billions of dollars in revenue and create approximately 42,000 jobs,” according to a statement released by the prime minister’s office.

Here are some facts released by Trudeau’s office: