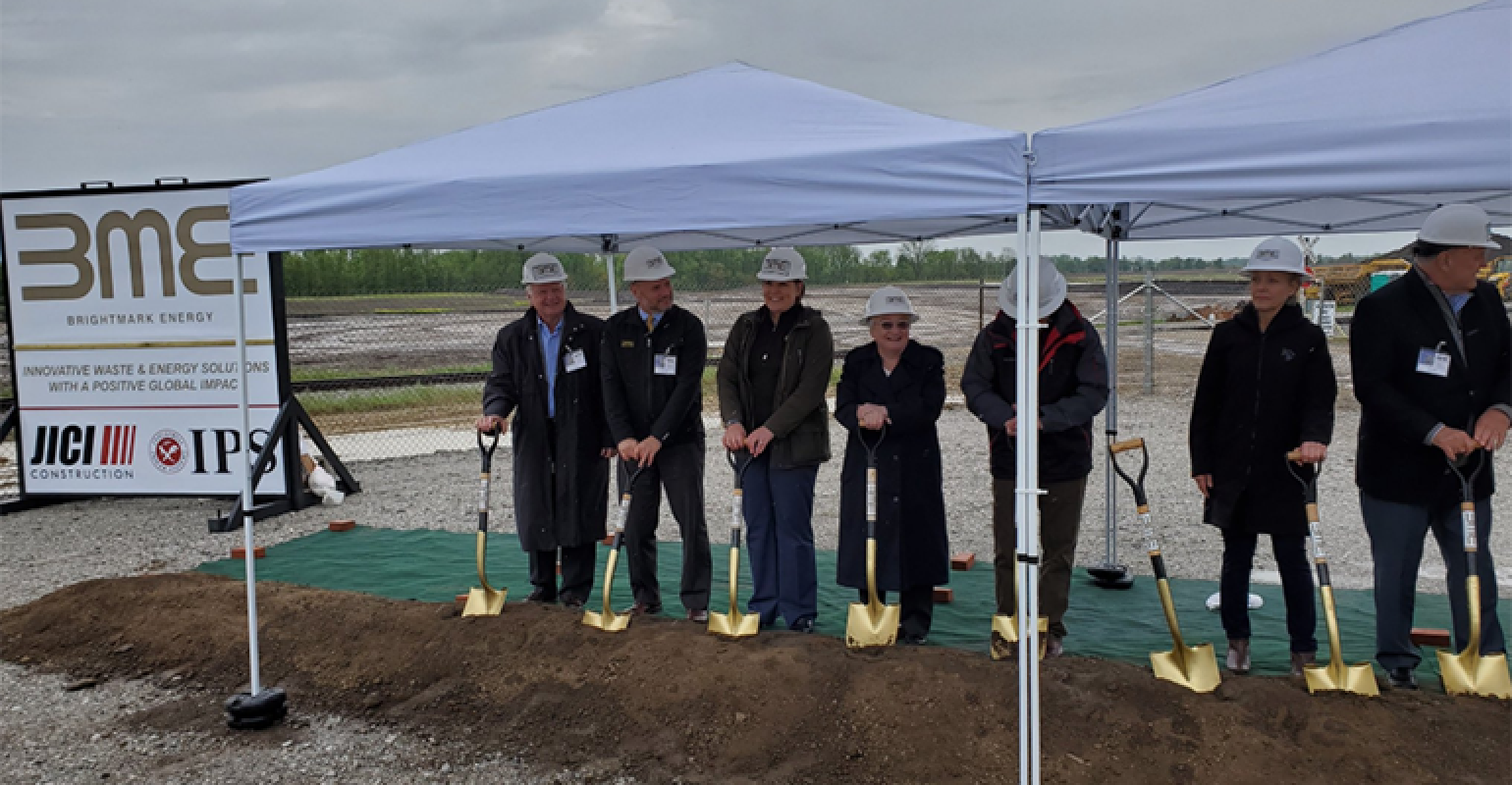 Brightmark’s new technology recycles plastic into transportation fuel and wax, and the company has plans in the works for future sites.

Brightmark Energy, a San Francisco-based waste and energy development company, broke ground on the first commercial-scale plastics-to-fuel plant in Ashley, Ind. A total of 136 full-time manufacturing jobs will be created in northeast Indiana when all phases of the 112,000-square-foot facility are operational.

The new plant will utilize a state-of-the-art plastics-to-fuel process that recycles waste—including items that cannot readily be recycled, like plastic film, flexible packing, Styrofoam and children’s toys—into useful products, like fuels and wax. Ultimately, the outputs of this technology could also be used to produce the feedstocks necessary for manufacturing plastic again, said the company.

Brightmark Energy CEO Bob Powell welcomed attendees to the groundbreaking and cited the need for paradigm-shifting recycling technologies like the process that will be applied in the new plant.

“This sustainable technology directly addresses an acute problem facing our nation: more than 91 percent of the 33 million tons of plastic produced in the U.S. each year is not recycled,” said Powell in a statement. “These products end up sitting in landfills for thousands of years or littering our communities and waterways. This technology offers a tremendous opportunity to combat a major environmental ill and create positive economic value in the process.”

The Ashley facility will be the first of its kind to take mixed waste single-use plastics and convert them into usable products at commercial scale, according to the company. Initially, the facility will convert approximately 100,000 tons of plastics into more than 18 million gallons a year of ultra-low sulfur diesel and naphtha blend stocks and nearly 6 million gallons a year of commercial grade wax in a process that is expected to be 93 percent efficient.

Oil industry company BP will purchase the fuels produced by the facility, and AM WAX will purchase commercial grade waxes produced in the process. State and local government officials and representatives from BP were on hand with Brightmark executives as the first shovels hit the site.

“As a global energy business, BP is focused on the dual challenge of meeting society’s rising energy needs while reducing carbon emissions,” said Amy McKerns, director of business development for BP Integrated Supply & Trading, in a statement. “Our relationship with Brightmark Energy highlights the vital role that innovation and technology will play in driving the transition to a lower-carbon future—and the many and unique opportunities that will come with it.”

State and local support for the project became a critical factor in the decision to build in Ashley. The Indiana Economic Development Corporation offered up to $900,000 in conditional tax credits and up to $100,000 in training grants based on the company’s job creation plans. These incentives are performance based, meaning until Hoosiers are hired, the company is not eligible to claim incentives.

Last month, Brightmark closed a $260 million financing package for the construction of the plant, which includes $185 million in Indiana green bonds. As part of the financing closure, Brightmark became the controlling owner of RES Polyflow, the Ohio-based energy technology company that innovated the process for converting plastics directly into transportation fuel and other products.

“Brightmark plans to develop dozens of additional plastics-to-fuel facilities across the United States, and these new locations will all be anchored by the facility we’re breaking ground on today here in northeast Indiana,” said Jay Schabel, president of Brightmark Energy’s plastics division, in a statement. “We’re pleased to have this opportunity to offer a solution to the complex problems our nation faces around plastic pollution.”