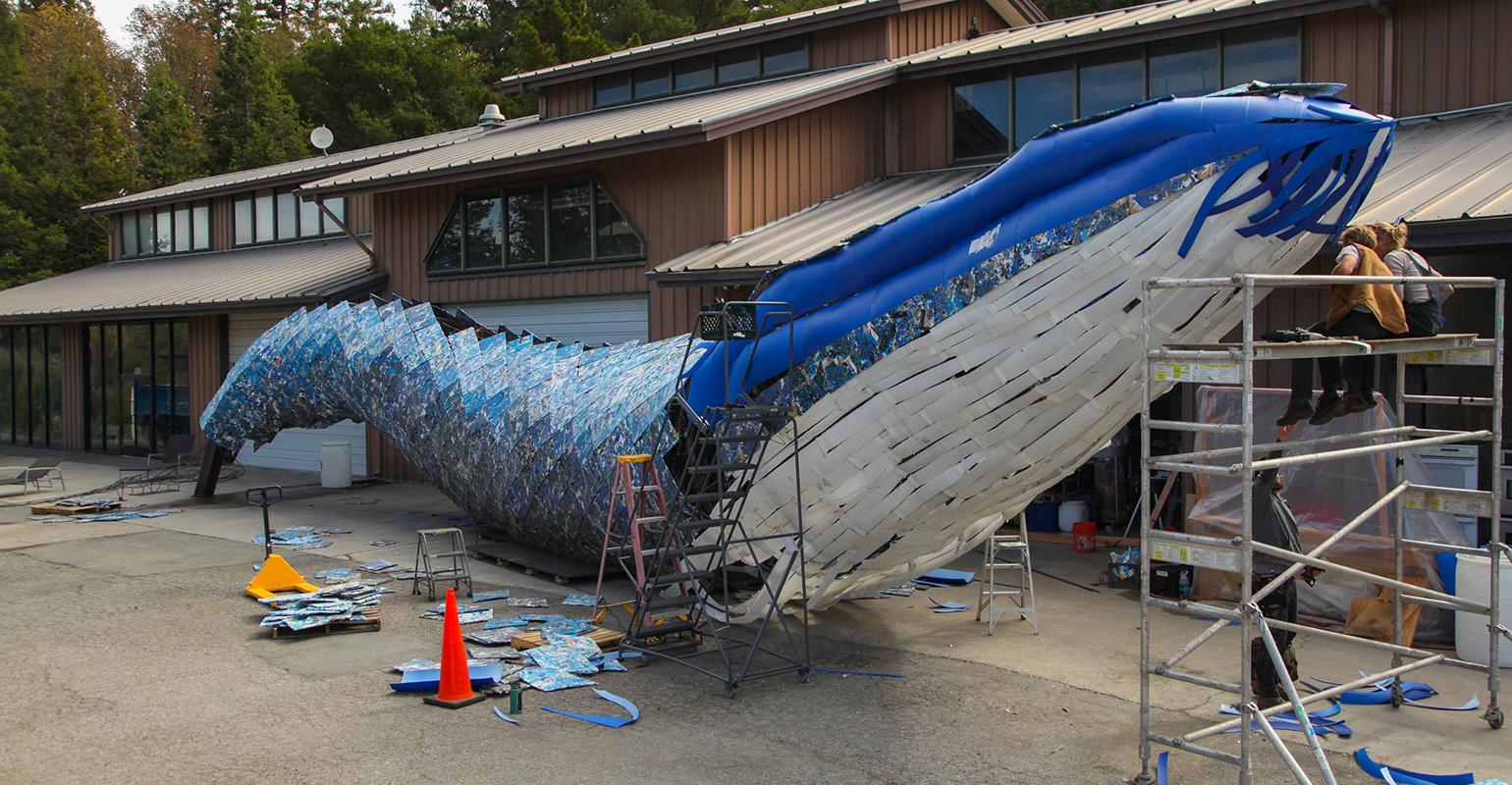 Monterey, Calif.-based Monterey Bay Aquarium, in partnership with the National Park Service (NPS) and the Golden Gate National Parks Conservancy (Parks Conservancy), unveiled a life-sized blue whale art installation at the heart of the Golden Gate National Recreation Area, Crissy Field in the Presidio, to bring awareness to a massive problem: the issue of ocean plastic pollution. The 82-foot-long blue whale made from hand-recycled plastic trash made its splash on October 13 and will remain on public view until January 2019.

Artists Joel Dean Stockdill and Yustina Salnikova sat atop scaffolding while making design decisions at the construction site of Monterey Bay Aquarium's life-sized blue whale art installation made from discarded single-use plastic. Building the whale took four and a half months, including 15 weeks to hand recycle the plastic panels, four weeks to fabricate the steel frame and three weeks to sculpt and screw on the panels.

Monterey Bay Aquarium chose the endangered blue whale as the subject of the art installation to draw a connection between plastic pollution and its impact on marine life around the world. The largest animal ever to live on Earth, a blue whale can weigh about 300,000 pounds—the approximate weight of plastic that ends up in the ocean every nine minutes.

"We created a life-sized blue whale to dramatize the scale of the problem," said Julie Packard, executive director of the Monterey Bay Aquarium, in a statement. "As people view the installation, we hope they're inspired to make changes in their own plastic consumption and will to join us in protecting ocean wildlife."

Stockdill, a Bay Area artist known for creating artworks from reclaimed materials, collaborated with Salnikova to build the blue whale installation. The two, along with a team, personally hand sorted, cleaned and cut plastic trash before transforming it into panels that compose the artwork.

"Plastic is filling up our landfills and only 9 percent of it has been recycled. As a society, we need to reduce our reliance on single-use plastic," said Stockdill in a statement. "That's why I wanted to be a part of this effort."

Stockdill and Salnikova chose to make the installation from recycled plastic trash rather than use found objects typically seen in other discarded plastic sculptures. The artists developed a custom recycling process done by hand to demonstrate that small-scale, high-impact waste management is possible and not something that necessarily has to be done on an industrial scale.

GreenWaste Recovery (GWR) was a major participant in the creation of the installation. When the call went out for donations of post-consumer plastics, GWR said it was enthusiastic about contributing. The team working on the art installation visited the GWR materials recovery facility, where they were overwhelmed by the volume of discarded plastic. GWR ultimately donated and delivered approximately 6 tons of plastic bags, detergent bottles, discarded recycling carts and other various colorful plastics to the project.

“We were thrilled at the opportunity to support the project,” said Katelyn Lewis, GWR director of sustainability and strategy, in a statement. “This installation, in a beautiful manner, will communicate to a broad audience the detrimental environmental impacts of plastic in our ocean.”

Monterey Bay Aquarium developed the idea for the blue whale with Hub Strategy and Communication, a San Francisco advertising agency. Hub worked with Building 180, an arts management and consulting agency, to bring in Stockdill. This installation is part of the Art in the Parks program that has a mission to connect visitors with creative experiences in the parks that are transformative, unexpected and inspirational.