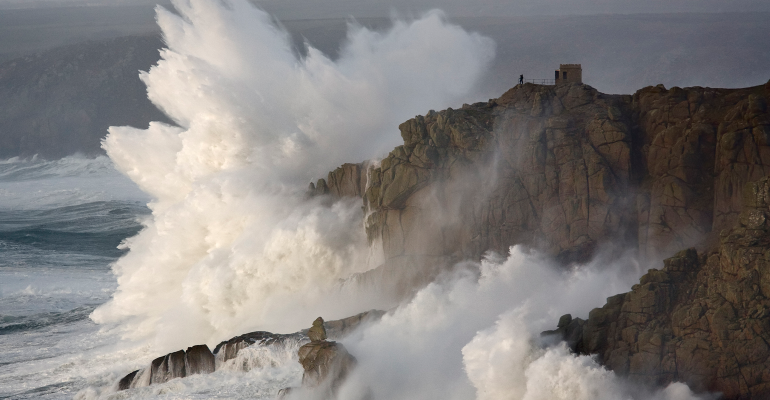 Where per- and polyfluoroalkyl (PFAS) go and what happens to these “forever chemicals,” once they get there is an ongoing conversation. One assumption is that a good portion of the persistent, toxic compounds eventually ends up in oceans and remains there. But a new Stockholm University study, published in Environmental Science & Technology, shows PFAS don’t simply wash away; even if they make it to oceans, they bounce back, moving from sea to air. The scientists who made this discovery focused specifically on a widely used subgroup of PFAS: PFAA, found in a long list of products.

They discovered that PFAA move from water to land via sea spray aerosol, which is created when waves and wind form bubbles that burst, ejecting seawater and whatever that water contains – namely surfactants, which are any chemicals that are active at the surface.

“[From early on] we had a feeling PFAA might be transported from sea to air as we knew they were very active surfactants.  Then we saw in the lab they are efficiently transported by sea spray,” says Matthew Salter, a co-author of the study and a researcher at the Department of Environmental Science, Stockholm University.

The early lab work not only indicated the sea-to-air pathway, but the team’s global modeling suggested that this sea spray aerosol can be a significant source of PFAA air pollution both in coastal areas and inland Europe, says Bo Sha, lead author, and PhD student in the same Stockholm University department.

“But we needed to collect field evidence to prove this theory that came from our lab work. We started collecting aerosol samples at two Norway coastal sites in collaboration with the Norwegian Institute of Air Research,” he says (to see if they could validate their first finding around where this PFAA pathway began).

They used sodium as a tracer and did a correlation analysis of the sodium and PFAA.

“Nearly all sodium comes from the ocean, so if we found a significant correlation between sodium and PFAA maybe we can [more definitively] say sea spray aerosol contributes to PFAA in coastal air, and indeed we found these correlations,” Sha says.

There was thinking that once these chemicals washed to sea, they’d become diluted to levels that pose no risk to humans or other life, or that they would be transported to the bottom. Then they could be forgotten.

“I don’t think scientists thought this, though much of society did. But we found you cannot just forget about PFAA because there is a pathway for it to come back from the oceans to land, mainly to coastal areas but also inland areas because aerosol can be transported thousands of kilometers [which is nearly as many miles] from the ocean. So even if we stopped making products that contain PFAA or stop making PFAA itself we will still have to deal with contamination over land areas potentially going forward,” Salter says.

What to do about these controversial compounds once they infiltrate the environment is a hard question to answer.

Another of the study co-authors, and Stockholm University professor, Ian Cousins, has also researched strategies to manage PFAAs and other PFAS. He focused on the “essential use” concept.

“Because of their extreme persistence and their associated risks, the Madrid Statement argues for stopping their use where they are deemed not essential or when safer alternatives exist. To determine when uses of PFAS have an essential function in modern society, and when they do not, is not an easy task,” Cousins says, explaining a big part of the challenge is limited PFAS-related information provided by manufacturers.

He and some of his colleagues developed three categories to describe different levels of essentiality of individual uses and concluded that many of them can be phased-out because they are not needed for the betterment of society in terms of health and safety, or because there are functional alternatives.

“Some uses of PFAS would be considered essential because they provide for vital functions and are currently without established alternatives. However, this essentiality should not be considered as permanent; rather, constant efforts are needed to search for alternatives,” Cousins says.

Going back to the sea-to-air pathway discovery, the Stockholm researchers plan to try and build on their findings, envisioning putting information on the transport process they found into a global model that would estimate the contribution of PFAS from different sources. Besides sea spray aerosol, there are two other main known sources: emissions from factories that use PFAS; and precursor gases that evaporate from products that contain PFAS and are released into the air.

The team’s thought is that if scientists studying various potential PFAS pathways put their knowledge together they can quantify the loading from each process to target the ones with most impact and reduce their loading.

“That’s where we are going with this work,” Salter says.

“If a majority of the PFAA is coming from sea spray aerosol, even in non-coastal areas, then there’s an argument for figuring out what that means, where if it’s not the case, we know to focus on direct emissions from fluoropolymer plants or reducing precursor gas concentrations in the atmosphere.”

But, the authors heed, figuring out where it comes from, where it goes, and pumping it out of the atmosphere is not a sustainable solution because unless they are destroyed, they will continue to move around. And there are no proven methods to completely irradicate these chemical compounds.

Says Salter: “There are ways to remove PFAAs locally and in small quantities, but the rabbit’s already out of the hat. There’s a load in the environment, and getting all of it back is not going to happen.”