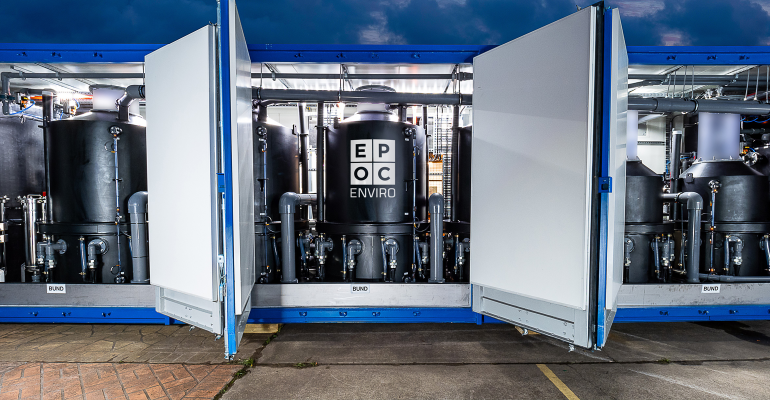 A PFAS remediation technology with Australian origins, proven to remove more than 99% of long-chain, and most short-chain PFAS compounds from water and soil, has come to North America.

A PFAS remediation technology with Australian origins, proven to remove more than 99% of long-chain, and most short-chain PFAS compounds from water and soil, has come to North America.

Invented by OPOC Systems, Surface Active Foam Fractionation (SAFF) units will be manufactured and commissioned by its U.S. subsidiary, EPOC Enviro, while Boston, MA-based biotech company Allonnia will be the exclusive sales and marketing partner in the U.S., Canada, and Mexico.

SAFF separates PFAS from water or soil and concentrates it without the use of chemicals or adsorption media that leave behind residue. And it requires less energy than most other remediation techniques, according to Allonnia and EPOC.

The concept of the technology, which relies on PFAS’s natural makeup, was conceived with the knowledge that these compounds tend to reside at air-water interfaces.

At high level, it’s a foam fractionation technique that uses bubbles that rise through water columns. PFAS attaches to the bubbles, which foam at the top of the column, and are collected and concentrated.

The containerized approach means that the units can be readily transported via container ship, ready for installation with no further manufacturing required, says Peter Murphy, president of EPOC Enviro.

“Plug and play was also an important design consideration as we know that remediators need the SAFF technology to get to work quickly.  And the modular design component enables us to scale up or down at each site,” he says.

Allonnia has focused for a couple of years on remediation of emerging contaminants, with PFAS, specifically, it’s concentrated on binding organisms to detect PFAS and biodegrading them.

But being able to separate PFAS is key, says Mack Astorga, vice president of Allonnia. “You need to separate PFAS from groundwater or soil before deploying a destruction solution in order to be cost effective and efficient, especially when aiming for extremely low cleanup targets set by many states. So, we were looking for technologies to achieve this, and we came across SAFF.”

Among the most common, established separation techniques are granulated activated carbon and ion exchange. But they have their limitations.

“Both of them primarily separate the contaminants from water, but they are adsorbed on top of the resin or carbon, leaving contaminated residue that has to be landfilled or incinerated. SAFF just concentrates in the foam and can be destroyed easily,” Astorga says.

The technique is a multistage fractionization process. In the case of groundwater, it’s pumped into the SAFF system to separate groundwater from PFAS.  Then the compounds are run through vessels several times to further dewater them, ultimately producing a hyper concentrate. Every million gallons of treated groundwater yields one gallon of hyper concentrated PFAS foam that will require treatment, according to EPOC and Astorga.

So how will the remaining concentrate be managed?

“Where the market is going is toward onsite destruction technologies, and we plan to couple SAFF with some of these evolving technologies once they are prime for market. They have been tested in the field, and a few have been shown to be effective, but not at commercial scale,” Astorga says.

Allonnia is beginning to vet several of these new destruction technologies as potential next steps after SAFF, such as electro-oxidation, super critical water oxidation, and cold plasma. Each has been demonstrated to work well with liquid media such as foam concentrate, as well as to break down PFAS’s strong carbon-fluorine bond.

“Destruction technology developers are asking to partner with us on pilot projects to prove their technology, but on a low volume that is hyper concentrated … Our job is to separate and concentrate, but we recognize the market wants a complete closed loop, onsite solution for PFAS. Coupling SAFF with destruction technologies provides that opportunity,” Astorga says, adding leveraging SAFF on the front end reduces the cost of these energy-intensive backend processes. Actual operating cost depends on local utility fees per kilowatt of power, but on average is $0.25 per 1,000 gallons treated.

The technology has been deployed globally at 10 to 12 sites, with the first project treating groundwater at a military base in Australia, followed by several landfill projects in Sweden.

There are two units operating in the U.S. now and one slated to launch in the fall of 2022.

The first two systems are being used by environmental consulting firms for pilots at an industrial site and landfills; and the third is for an environmental state agency in the Midwest.

“We are hearing significant interest from federal agencies [particularly the Department of Defense], large industrial companies, and landfill owners. They have, or will likely soon have, tremendous PFAS liability and will be among the top markets that we will target.”

Figuring out how to address short-chain PFAS compounds has been a newer accomplishment. In general, they are harder to remediate, but  more technology companies are focusing on them, which will likely be tightly regulated in coming years.

With SAFF the challenge was that PFAS have less affinity to grab on to bubbles. But by adjusting bubble size and intensity and adding surfactants these short-chain compounds can be removed effectively.

Going back to the concepts’ evolution, Murphy, says, “Foam fractionation was one of several approaches that our R&D team tested in the lab in 2015. But the lightbulb moment came when our chief technology officer stood in front of his home aquarium and contemplated how surface-active molecules like PFAS could catch a lift on a rising air bubble and be harvested at the surface.

Surface Active Foam Fractionation is a perfect alchemy with our company’s passion for green science, and our entire team has been strongly united to find a sustainable solution to the global problem of PFAS contamination.

Now that more remediators are aware of the heavy lifting capability of our technology in removing PFAS, our collective goal is to continue to be a part of the conversation within remediation circles, and to take the conversation from awareness to inquiry, to our process … As the North American distributors of the EPOC SAFF, we will work closely with Allonnia to achieve this goal.”

Murphy says over time he sees potential for new remediation markets, including sewerage treatment, reverse osmosis reject water and drinking water among others.