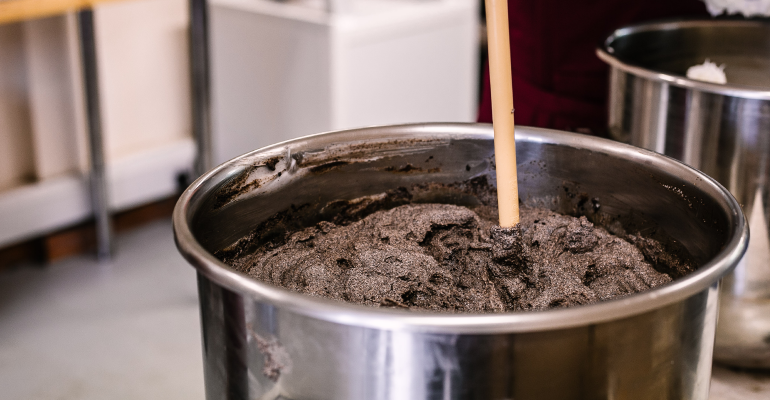 Several years back, William Brightman stopped into a London coffee shop for his usual cup of java and happened to ask the barista what he did with all his spent coffee grounds. He was amazed to learn the shop paid the city to routinely collect and dispose them—so amazed he struck a conversation with his sister Anna Brightman, thinking there had to be a better solution. The wheels in her head started to turn; they talked more, and not much later the siblings were in business together, making something of those grounds.

Anna, who grew up wanting to be a makeup artist knew that coffee had loads of skincare benefits, so, she says, “I thought, why not repurpose the coffee into sustainable circular skincare products?”

At the same time, they’d be addressing a big trash problem of coffee shops.

“This is industry-level production; it’s not one person at home making their morning coffee. We started collecting from this one shop and experimenting with the grounds,” Anna says.

Initially they made coffee body scrubs, then got into face scrubs. Today the UK-based company, UpCircle Beauty, collects from over 100 shops.

“We get grounds for free. It’s a mutually beneficial relationship where they save on disposal, and we get our ingredients. Plus, many of them sell our products, and it’s a nice way for cafes to show they engage in sustainable practices and innovations to minimize their waste,” Anna says.

How much they take off of retailers’ hands adds up. It’s been enough to build a menu of sustainable skin and eye care products that today are shelved at a couple of sizable retail chains and several smaller outlets.

Perks & White Coffee Shops is among those who provide feedstock and sell what’s made from it. The company has three retail outlets in South London that generate over 440 pounds of coffee waste.

“Working with UpCircle has saved us some money, but the main attraction for us is developing a local relationship with a like-minded company that shows how it is possible to create a circular economy that turns waste into value,” says Jason Perks, co-founder of Perks & White Coffee Shops.

What grounds that Lumberjack, a general store and coffee shop, doesn’t give to a community gardener for compost, goes to UpCircle.

“We're very happy to give away the byproduct from our coffees, and it means there's less waste for us to deal with, or to have to bag up waiting to be composted and attracting pests,” says Fraser Rieley, a manager for the London-based, charity-owned business.

Like Perks he says the partnership aligns with the shop’s core values:  sustainability, efficiency, and mutually beneficial relationships with suppliers.

While they now make other cosmetics from varied beverage and food byproducts, upcycled coffee grounds remain a major focus. And upcycled is the key word here— they’re taking would-be waste— mushed wet grounds—to make something better (rather than something of equal or less quality than the used material). In this case, the end product is actually better than the beans, even before they went into the coffee, according to Anna.

“It works really well because the quality of coffee is not depleted through the brewing process. And antioxidants, which fight free radicals [that contribute to aging skin] in brewed coffee are of a higher content than in fresh beans. So, we can do a good environmental thing by minimizing what goes to landfill, but we also create a higher value product,” she says.

UpCircle has collected 350 tons of coffee grounds since its start in 2015. Based on the company’s growth pattern, the Brightman’s project the operation will save an additional 1,000 tons in the next five years.

There are two products that contain repurposed coffee grounds: face and body scrubs; each scrub alone is made with the equivalent of four espresso shots. And that caffeine comes with skin perks: it has brightening effects and reduces inflammation and redness.

They also make eye cream and face serum, derived from oil extracted from the grounds with benefits such as reducing puffiness and tightening skin.

“We wanted to find as many ways of getting coffee byproduct in our lines as we could. But we had to think about how we used it. You do not want grounds on your eyes, but the oil extract works well,” Anna says.

The products launched at ULTA Beauty stores after sister and brother met the large retail chain’s buyers at a trade show in 2019 and pitched to them.  By now they’re sold in 740 ULTA stores; at Whole Foods, online pharmacy company Pharmica, Nordstrom Rack, ecobeauty retailer Credo, and Anthropologie.

That’s the short story on how the small company made a name for itself with spent coffee grounds. Now UpCircle works with more than 10 nutrient-rich byproducts and ingredients. They use processed chai spices to make soaps. They use chamomile stems to make toner. And they take water left from juicing to make all sorts of products like a hand and body wash made with upcycled kiwi water and a lotion with upcycled bergamot fruit water.

UpCircle has been approached by Starbucks and Costa, but for now concentrates on independent coffee shops.

“We like the face-to-face interaction. Plus, we put our heart and soul in this, and independent coffee shops have the same level of care and concern as we do. It gives us confidence they will always use the highest quality ingredients and that it’s sourced ethically,” Anna says.

Headquartered in London, UpCircle has warehouses in Europe and New Jersey. The manufacturing is outsourced, but the Brightman’s say they have tight ties with these partners.

“We have worked with the same manufacturers from the start. It takes trial and error. We had to refine the process over and over to find a method that works, and then we had to scale. No one else has done this, so we had to have manufacturers willing to work with us and to start again whenever necessary,” Anna says.

The pandemic threw another curve ball, but the young entrepreneurs managed to triple their team and launch seven new products since COVID hit.

“My brother and I worked seven days a week and did some serious problem solving as a lot of coffee shops were in tourist areas and closed, so we couldn’t get grounds,” Anna says.

They pivoted, going to residential areas for new supplies. And the plan is to grow more this year.

UpCircle plans to launch five products before Christmas and sell mainly to hotels and boutiques. The next project, partially funded by a grant from the UK government, will be to make bath products, like salts and bombs, infused with petals left from weddings and other events.

The two co-founders believe they are in the right place.

“The world has finite resources, and at the minute we are depleting them at a scary rate … Cosmetics brands that extend the lifecycle of things that are already in circulation are the future,” William says.

“At UpCircle we’re proving that we can create competitively priced, high-performing products from upcycled ingredients and therefore more broadly demonstrating that the beauty industry can become a lot less wasteful,” he says.