Organic waste diversion is rooted in good intentions, but as the movement grows, it could spell danger for landfill gas to energy (LFGE) projects—as well as overall landfill health.

According to the EPA’s Advancing Sustainable Materials Management: Facts and Figures 2013 report, the recycling rate on paper stood at 67.0 percent. The rate on yard trimmings rose from 57.7 percent in 2012 to 60.2 percent in 2013. Food waste, meanwhile, accounted for 14.6 percent of MSW waste generation and 21.1 percent of discards last year. It was just 2.1 percent of recovery.

Meanwhile, New York City’s pilot program on food waste began in 2013 with one neighborhood on Staten Island and has grown to serve more than 130,000 households across all five boroughs. The curbside program collects organic wastes including paper, food-soaked paper goods, food, and more—with the excepting of tree trimmings and firewood.

But the flip side of less organics ending up in landfills is less gas generation and recovery.

Pat Sullivan, senior vice president and managing director for SCS Engineers’ consulting and engineering operations in the southwestern U.S., says there are still plenty of organics heading to landfills, but the typical curves in the amount of gas generated has flattened as the organics diversion movement grows.

Organics are “the primary source of degradable material that produces methane and landfill gas,” he says. “The growth rate of those gases has gone down.”

California, a long-time organics diverter, has seen methane generation drop as more and more organics are pulled out of landfills through diversion programs, Sullivan says.

“If you’re just flaring the gas, it doesn’t really matter,” Sullivan says. “Who it hurts is both existing and proposed energy projects.”

The economics of LFGE projects are typically based on a projected minimum daily rate of gas, and those projects depend on adding more methane and adding to the recovery of more energy.

“Now some of those are in jeopardy and wondering if they will be able to meet their contract obligations over time,” Sullivan says. “It kinds of adds some risk they didn’t think they had.”

There are several alternate methods for disposing of organics that are diverted to landfills, but they too have their shortfalls, Sullivan says.

Composting doesn’t produce a lot of methane if done right, Sullivan says, and therefore does not produce energy. It does, however, produce carbon dioxide and odor. Composting also emits 5 to 10 times more volatile organics compounds once food waste is added to the mix, Sullivan says.

The direct energy benefits of composting are difficult to document because it is occurring at multiple degrees, such as replacing commercial fertilizer and reducing the output of fertilizer plants, and reducing waste consumption needed for irrigation on crops that use compost.

“Those indirect energy benefits are difficult to measure,” Sullivan says. “If there’s one knock on composting, it’s that you don’t get energy out of the waste like you do with some technologies out there.”

Anaerobic digestion can generate methane, and is used for some things that can’t be composted. It is not being used much in the U.S. yet, but moreso in Europe, Sullivan says.

Closed systems allow for controlled reactions and maximized collections, Sullivan says, resulting in a cleaner byproduct than what is produced in the landfill.

“Digester gas is cleaner and typically has higher methane content on a percentage basis, but it’s a very expensive process,” Sullivan says. “There’s that value judgment that people are going to have to make.”

The higher price of these technologies, coupled with the loss of renewable energy as a revenue stream, means the cost will have to be made up somewhere. 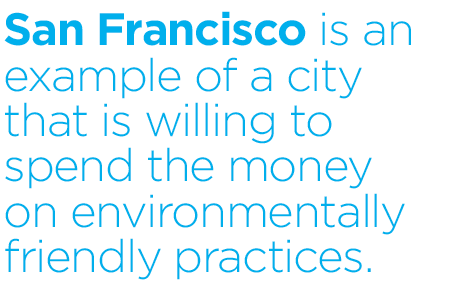 In some places, tipping fees may be around $20 to $30 per ton to put waste into a landfill. Sullivan says collection methods that would result in better, cleaner methane collection could raise those fees to $80 or $100 per ton—prices that would likely be passed along to the consumer through collection rates.

“Are you willing to do that to maximize the energy recovery of that waste?” Sullivan asks.

The city of Oakland, Calif., implemented a program to divert food waste, but as the higher collection costs were passed on to residents there was a big push back, and people began just throwing their food into the regular trash again, Sullivan says. The city subsidized the costs of the collection program in response. But Sullivan wonders if this is the best solution since the city merely went from charging residents through collection rates to using tax revenue instead.

“I think you’ll see more and more of that when people see the real and non-subsidized cost of recycling,” Sullivan says.

San Francisco is an example of a city that is willing to spend the money on environmentally friendly practices, and Sullivan says they do a lot of things and pay a lot of money to achieve high diversion and recycling rates.

But composting or anaerobic digestion can only manage a fraction of the organic waste.

“None of these organic technologies take away the need for the landfill,” he says. “If you were to ban organics, the landfill won’t be a place where you can recover the gas in a beneficial way. Gas quality will go down.”

Some places have taken the leap of faith to ban organics from landfills in an effort to force technology to do a better job of managing them, and Sullivan says it could lead to better composting and anaerobic digestion technologies. In other places, states have backed off organics bans when landfills are collecting gas.

Another consideration of organic diversion is the biological decomposition process. The bacteria contained in organic material is critical in this, Sullivan says. So far, mostly yard wastes and similar organic material have been diverted, and landfills have still had the benefit of food wastes. But should those food wastes begin to disappear from the landfills, there may be some issues.

“The organics tend to be the most moist of the waste stream,” Sullivan says. “Taking that away will make landfills drier and may challenge the decomposition process.”

Additionally, as the total volume of gas goes down, the theory is that the concentration of toxins in the remaining gas will go up, Sullivan says. This will create more impure gas, as well as create a more toxic environment for the bacteria that remains in the landfill.

There has been some concern about this happening, but because organic diversion is primarily green waste and not food waste, there has not been a big impact yet. So between lower bacteria populations for decomposition and lower gas generation, significant food waste diversion will likely result in a negative gas curve, Sullivan says.

“As long as food waste is still going in, the removal of green waste has had an effect, but not as pronounced,” he says.

Still, the movement toward increased organic diversion has made it more difficult for LFGE projects to secure investors.

“I don’t think the full brunt of the impact has been felt, and it won’t until food waste is eliminated. When that happens you will be a much bigger impact on gas generation,” Sullivan says. “Communities want to go green, but it’s harder when it means losing money or passing on higher rates to consumers.”