How Banning Food Waste from Landfills Affects the Industry

As a way to reduce the amount of waste sent to its landfills, Maine legislators have begun looking for ways to require composting for food and other organic wastes.

Originally included in LD 1578, sponsored by Sen. Tom Saviello, (R-Wilton), a mandate required those producing more than one ton of food waste to divert it from landfills by sending it to a composting facility within 20 miles. But Maine officials will have to find other ways to divert food waste because the mandate was recently removed from the bill.

“It had nothing to do with the merits of the proposal itself. It was more political. There was fear that including a ‘mandate’ in the bill would make it difficult to pass, and would definitely prompt a veto,” says Sarah Lakeman, Sustainable Maine Project director for the Natural Resources Council of Maine. “This was an omnibus waste bill, so they took it out to preserve the rest of the bill that they had a better chance of passing. The committee also thinks that they can bring it back for consideration in 2017 as its own bill. The start date of the ban wasn’t until 2020 anyway, so even with the delay in enactment, it could still start at the same time or sooner.” 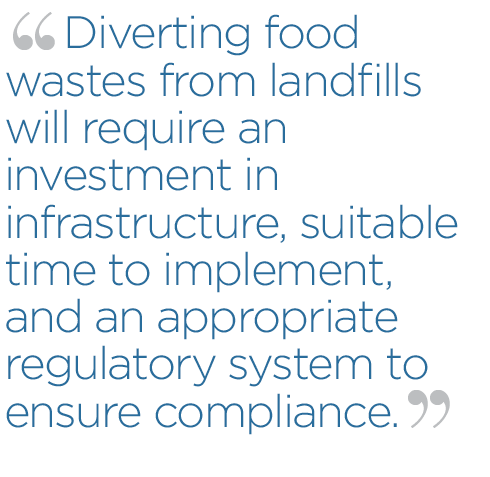 Although Maine may have to wait until next year to decide the fate of food waste, the idea behind the ban raises some questions within the waste and recycling industry.

“The original intent was to urge the largest producers of food waste to stop wasting; which would in turn help spur development in composting infrastructure in Maine,” says Lakeman. “We have adequate infrastructure now, but we need to expand it to make it more cost effective for everyone to participate. Particularly by lowering or sharing in transportation costs, and decreasing the distance traveled to a composting facility.”

Michael Van Brunt, director of sustainability for Morristown, N.J.-based Covanta Energy, says that states look to these types of bans to reuse, recycle and repurpose food waste and other organics to generate clean energy and rich, fertile compost, instead of wasting it in landfills.

“Diverting food wastes from landfills will require an investment in infrastructure, suitable time to implement, and an appropriate regulatory system to ensure compliance,” he says. “However, local and state policies can provide the impetus to facilitate food waste diversion. States like Vermont, Connecticut, California and Massachusetts have all adopted policies aimed at increasing food waste diversion, focusing first, like the Maine proposal, on large generators of food wastes. The European Union’s Landfill Directive, which reduced the amount of biodegradable waste going to landfills, has significantly contributed to the growth of sustainable waste management: more recycling, composting and energy recovery, and far less landfilling.”

Van Brunt also says he thinks banning food waste from landfills would have a positive impact on the waste and recycling industry.

“The most common alternatives for landfilling food waste are composting and anaerobic digestion, both of which are considered recycling when the residues are reused as compost or fertilizer. Banning food waste from landfills may also have the impact of reducing waste and possibly encouraging food reuse programs, even better than recycling,” he says.

“There is also the added benefit of avoiding significant greenhouse gases that are generated when food waste biodegrades in landfills," he adds. "Reducing the amount of food waste deposited in landfills can significantly reduce the generation of methane a highly potent greenhouse gas, 34 times more potent than CO2 over 100 years, and more than 80 times as potent over a shorter 20 year time frame. Methane is a short lived climate pollutant, increasingly a focus of international action to reduce GHGs. In fact, the White House announced a strategy to reduce methane emissions two years ago that specifically targeted diverting food wastes from landfills.”