HomeLandfillNuisancesPending: Wheelabrator’s Intent to Withdraw Catskill, N.Y., Project
Recent
Machinex Upgrades West County Resource Recovery in California
May 27, 2022
EREF Hosts Record-Breaking Charitable Auction, Proceeds Directly Support Scholarships and Scientific Research
May 27, 2022
This Week in Waste: Top Stories May 23 - May 28
May 27, 2022
Landfill Emissions Measurement: What We Know, What We Need to Know
May 27, 2022
POLL
SWANA & Oceans Caucus Foundation Host Congressional Briefing on Recycling
May 27, 2022
Collaboration Leads the Way in Connecticut to New Extended Producer Responsibility Law for Management of Discarded Residential Gas Cylinders
May 27, 2022
An Uber-Style Service for Curbside Recycling
May 26, 2022
S&B Selected as Contractor for New Hope Energy’s Advanced Plastics Recycling Unit
May 26, 2022
Need to Know
brought to you by 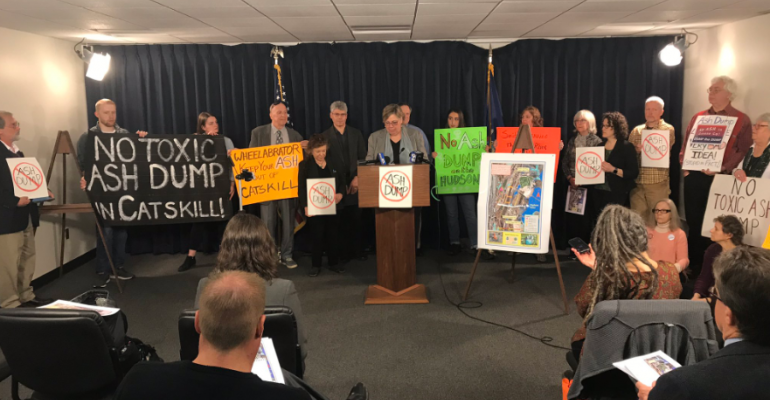 According to reports, Catskill, N.Y., officials say Wheelabrator has withdrawn its plan to build an incinerator ash landfill amid local opposition.

Wheelabrator Technologies could abandon its plan to build an incinerator ash landfill in Catskill, N.Y., amid opposition from local activists urging Catskill officials to reject the project.

HudsonValley360 reports that the proposed project involves hauling ash from Wheelabrator’s incinerators in Peekskill, Hudson Falls and Poughkeepsie to 158 acres in Catskill.

A letter from Wheelabrator declaring its intention to withdraw the Catskill plan is pending, according to reports. However, an area Department of Environmental Conservation official could not confirm on May 20 that Wheelabrator has pulled out.

Wheelabrator Technologies was proposing to lease 158 acres on Route 9W in Smith’s Landing, including a former quarry owned by Peckham Materials, Inc.

The project involved hauling 445,000 tons of ash annually from Wheelabrator’s incinerators in Peekskill, Hudson Falls and Poughkeepsie, to the Catskill site, and separating the metals from the ash. The anticipated life of the project was 48 years. The application, first submitted in 2017, was under review by the state Department of Environmental Conservation but its status is currently considered incomplete.